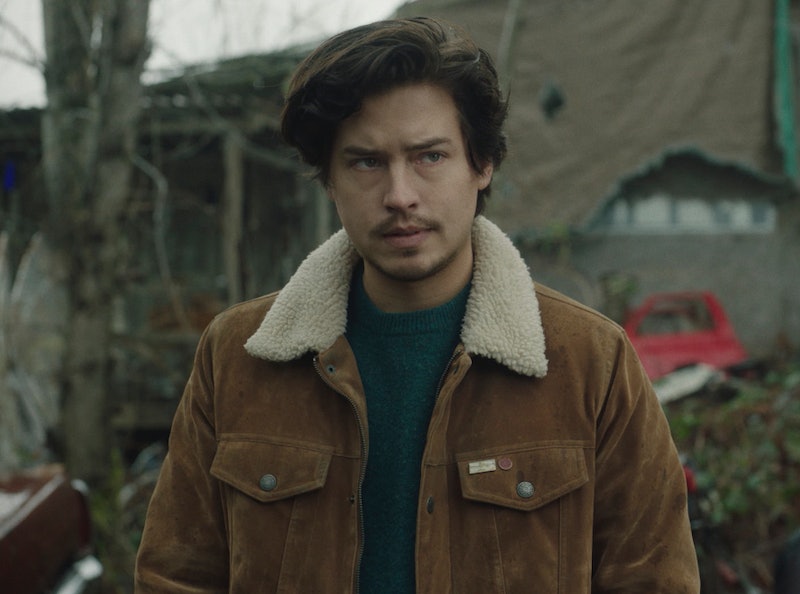 There’s a lot going on in Riverdale this season, including the introduction of a potential alien creature called the Mothman. It all started decades ago when strange lights began showing up in the sky, men started going missing, and an unexplained alien-like body was found in the woods. The older generation in Riverdale connected the experiences to the Mothman, who supposedly had a spaceship and abducted people. Now, the lights are back, and Jughead is on the case.

The Mothman gets his name from a real legendary creature, but his appearance in Riverdale differs from the actual Mothman folklore. People who claimed to have encountered the Mothman in the ‘60s described seeing a big, bat-like creature with wings and glowing eyes, whereas the Mothman on Riverdale is more ET-like. In any event, fans have plenty of theories about what the hell is going on.

We saw how easily Polly was swayed to join The Farm’s cult, so it may not have been hard to loop her into whatever this charade is either. She disappeared right around the time that the Mothman legend resurfaced, which may be more than a coincidence. But there’s also a theory that Polly was taken captive by the Mothman. When she called her mother for help, Alice remarked that it sounded like Polly was being held inside a spaceship. That’s a pretty random connection to make, unless Polly was really on a spaceship (or something fashioned to sound like one), having been taken prisoner by the Mothman.

The Mothman is Connected to the Military

When Pop Tate first experienced the strange lights, some people tried to explain it away as the result of military experiments. After all, Riverdale is close to an airbase. That could explain why the four miners all died from cancer after their supposed Mothman encounters. Perhaps they were exposed to radiation. Maybe the dead girls Betty and Alice keep finding in the swamp are also people who didn’t survive whatever experiments are happening.

This theory also connects the case to Archie, who’s fresh out of the army. And the synopsis for the March 31 episode suggests that he hears something unpleasant about the military: “Archie is caught off guard when his former Army General shows up in Riverdale with some unexpected news.”

Pop Tate is the Mothman

Considering he just retired from the diner, Pop now has a lot of time on his hands. And he readily said he always wished the strange lights had returned. Perhaps he’s pretending to be the Mothman as an attempt to get the real one to come back. As Reddit user stardust4711 pointed out, Pop could have enlisted his granddaughter Tabitha to help him spook Jughead with the lights that one night at the diner, since she’s running the place now. Plus, the Mothman legend came to the forefront after Tabitha mentioned it to Jughead, so that may be a sign that she’s involved.

Nana Rose is the Mothman

Stardust4711 also theorized that Nana Rose is involved, because she was with Pop the night he first saw the lights. She also inexplicably kept the alien-like body she found in the woods, and she told Jughead that the Mothman’s people came to her home to retrieve it. Nana Rose has always seemed a little shady, and even if she wasn’t part of the original Mothman crew, she could be trying to bring it back now. Maybe she’s trying to have a bit of fun with Pop or even trying to help revive Riverdale, as sheuebeh on Reddit theorized. Making Riverdale an Area 51-style tourist spot could bring the town back to life. Via Tabitha, Pop could have planted the idea of the legend in Jughead’s mind knowing that Jughead would write about it and bring publicity to Riverdale.

The Mothman is Connected to the Trash Bag Killer

Right now it seems like the Mothman is separate from the serial killer who Betty is hunting, but Riverdale creator Roberto Aguirre-Sacasa told Decider that the two may connect in the end. “I feel like all of these disparate threads will start leading together in surprising ways, and they’re all sort of tied together in some ways,” he said.

How they connect is anyone’s guess, but you can count on Reddit to keep churning out ideas.