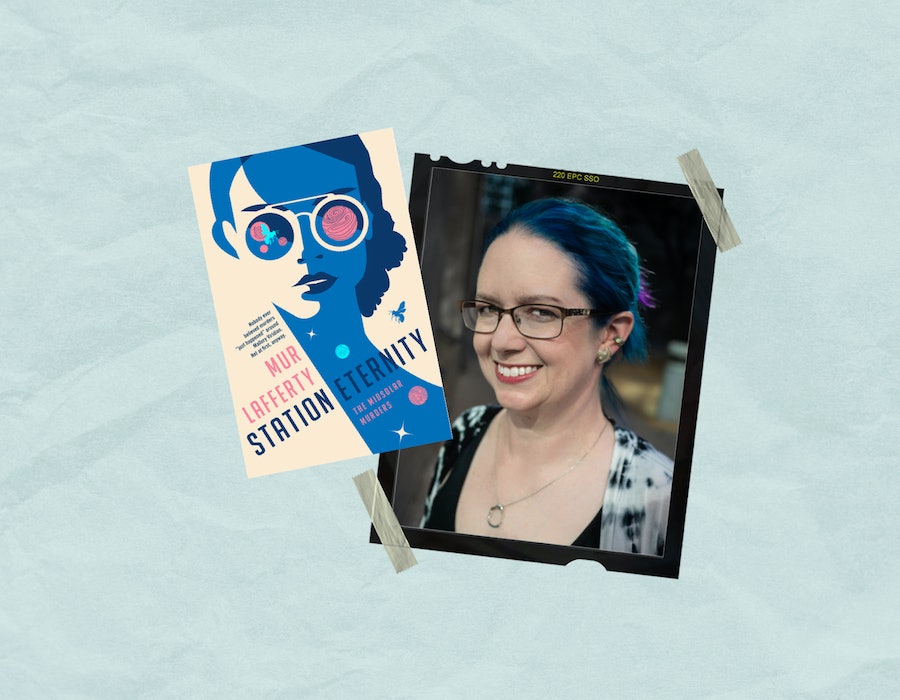 When Mur Lafferty realized she’d signed up to write a mystery, she was terrified. Her previous works had all been sci-fi — stories about a human tapped to write travel guides for monsters, a pair of dead friends on a quest to find their perfect afterlife, or a generation of less-talented superheroes pulled into a giant battle. But after selling Six Wakes on proposal, Lafferty had to confront the hard truth: She’d offered to write a murder mystery, despite knowing nothing about the genre.

So she turned to Agatha Christie. “I fell in love with her books and really tried to learn as much as I could from the way she structures things,” Lafferty tells Bustle. With Christie’s help, she pulled it off. Six Wakes, which centers on a spaceship full of clones who wake up to find that someone has killed their previous incarnations, garnered nominations for the Hugo, Nebula, and Philip K. Dick Awards.

Now, Lafferty’s back with another spacefaring murder mystery: Station Eternity, the first novel in a planned trilogy. She got the idea in the midst of her research for Six Wakes. In murder mysteries, she realized, no one ever acknowledges how amateur sleuths — from Hercule Poirot and Phryne Fisher to Father Brown and Jessica Fletcher — always just happen to be at the scenes of the crimes they investigate. Surely, someone would get suspicious if one person was proximal to crime after crime? “I figured if that person actually existed, they would be disliked and mistrusted — a pariah constantly investigated by the law,” Lafferty says.

In Station Eternity, that person is Mallory Viridian: an American woman who has been present at 18 murders before the novel even opens. Hoping to isolate herself from humans and prevent any further deaths, she flees Earth for a sentient space station called Eternity. There, with only two other humans — and a number of different alien species — on board, she thinks she’ll finally find a measure of peace. When Eternity inexplicably welcomes a shuttle full of human tourists, however, Mallory has little choice but to solve her 19th murder mystery.

Below, Lafferty talks about the challenges of writing a genre-bender, how white authors can write about ethnically diverse characters, and her concept for a Hallmark movie-inspired romance.

Blending the genres is challenging because, I don't know about anybody else, but I tend to go towards the genre I'm more comfortable with, forgetting that I need to be bringing along the other one, too. I'm more comfortable writing the space part. If I focus too much on the science fiction, then the murder mystery just becomes an annoying side note. Annoying to me, because I forget about it and realize I have to go back to it, but hopefully not annoying to the reader. I have to remember that there's a murder to be solved.

The scale, the point-of-view is a lot smaller in murder mystery than in science fiction. That's one big difference that I struggle with. Even though a sci-fi novel may have one protagonist, it's usually going to have a lot of point-of-view characters — a bigger cast, bigger points of view, and bigger B-plots. Mysteries, not so much. When I go in the sci-fi direction, I'm giving my characters different conflicts to deal with that have little or nothing to do with the murder mystery. That is hard to balance.

Mallory moves to Eternity to get away from people because she sees herself as a danger to others. She’s lonely, but she's acting with the greater good in mind, which seems to mirror what a lot of us have felt throughout the pandemic. Did you draw that parallel intentionally?

Not intentionally, no, but I see it. It's absolutely very similar to those of us who decided to take the pandemic seriously and isolate ourselves. That takes a toll on everybody. We're still finding out how much of a toll that's taking.

I don't do a lot of intentionally thematic things. I've discovered my brain doesn't work that way. It never has. I tried, in elementary school, learning about theme in stories and books. I could never actively pick out a theme. If I put one in my story — which I assume I can because I've written books before and gotten them published, so somebody thinks that something holds together — it's almost never a conscious decision.

The central casts of both Six Wakes and Station Eternity are very ethnically diverse. How do you approach writing these diverse casts as a white author?

I try to reflect the world, and the world has a lot of different people in it. There's a character from Six Wakes who's in a wheelchair. I wrote her after reading about disability activists being unhappy with science fiction just fixing disabilities in the future — by assuming that people wanted to be "fixed," it was erasing something that was part of them. So I was trying to bring in a person who was disabled to sort of explore that, but I am very careful to stay inside my lane. I can't tell their story that's uniquely theirs because of who they are. I can discuss a person who chose the wheelchair over gene therapy that would give her new clone limbs that could walk, but I can't tell the story of how she came to that decision and what she went through growing up disabled. That's not my story.

It is something that you have to do carefully and I may get it wrong. All I can do is apologize and try to learn. But trying and learning, I think is better than just defaulting to straight white dudes, because you don't want to make anybody angry. I want my books to reflect the world as well as I can see the world.

In Station Eternity, aliens are suspicious of humans because they don’t form symbiotic bonds with other creatures — something the aliens all do. Do you think the aliens would've felt differently if they had made first contact somewhere with less emphasis on individualism than the United States?

That is a fascinating question. Wow. Possibly. I think the Gneiss might be closest to any communities that are very strongly family-based — an “it takes a village to raise a child” kind of thing — because that's how they connect with each other. It's not still quite the symbiotic relationships that they know all the other species have, but they might have had a better view of humans if they hadn't started with the United States.

What do you think humanity's biggest challenge will be if we ever make first contact?

Not killing aliens. Everybody takes a look at what's foreign and thinks that it's a threat. It's fear of the other. There will be nothing more “other” than aliens if we ever make contact. That will be the hardest thing to overcome.

What do you say to people who deride genre fiction as being formulaic?

Your house needs a frame. You need a good solid foundation and you need walls and you need a ceiling and a roof and some doors. Beyond that, you can take a house in any direction. Fiction is like that. Everything works off of formula. If you think it doesn't, then you're just not looking hard enough.

I really love the book Save the Cat Writes a Novel because the author, Jessica Brody, did so much research into taking the Save the Cat Beat Sheet, which is essentially a formulated structure [for screenplays], and applying it to vastly different books — everything from horror to literary fiction to rom-coms.

The thing about genre is it’s not just the authors handing the reader a formula. It's the reader coming to the author going, “OK, I'm a romance reader. I need a happily ever after or a happy for now. I'm a mystery reader. I need a mystery and a sleuth and I need it solved, and I need it solved not in a magical way.” So the reader also comes with expectations. If you pooh-pooh the genre, you're also pooh-poohing the fans.

Is there any sub-genre you haven't been published in that you want to tackle?

One thing interesting is it made me realize that I've been getting heavily into turning tropes on their head — and not necessarily my genre's tropes. When you watch those Hallmark movies, you've got the woman who is in a bad relationship, and then she goes home and her high school sweetheart has become a hot lumberjack. She finds the real meaning of Christmas, leaves her dirtbag boyfriend, and moves in with the lumberjack. A lot of times those guys, back in the big city, aren't bad. They're not cheating or abusive or anything. They're possibly neglectful, and they definitely don't understand her, but they're not evil people.

After watching two or three of these romances, I'm wondering about how many men are left behind in the city when their girlfriends move back home to be with the hot lumberjack boyfriend. And that led me to a support group for men who've been left for the hot lumberjack back home. Basically calling it the Hallmark Survivor Support Group without actually saying the word “Hallmark.” And then from then it just turned into, “What if these dudes fell for each other after that?”