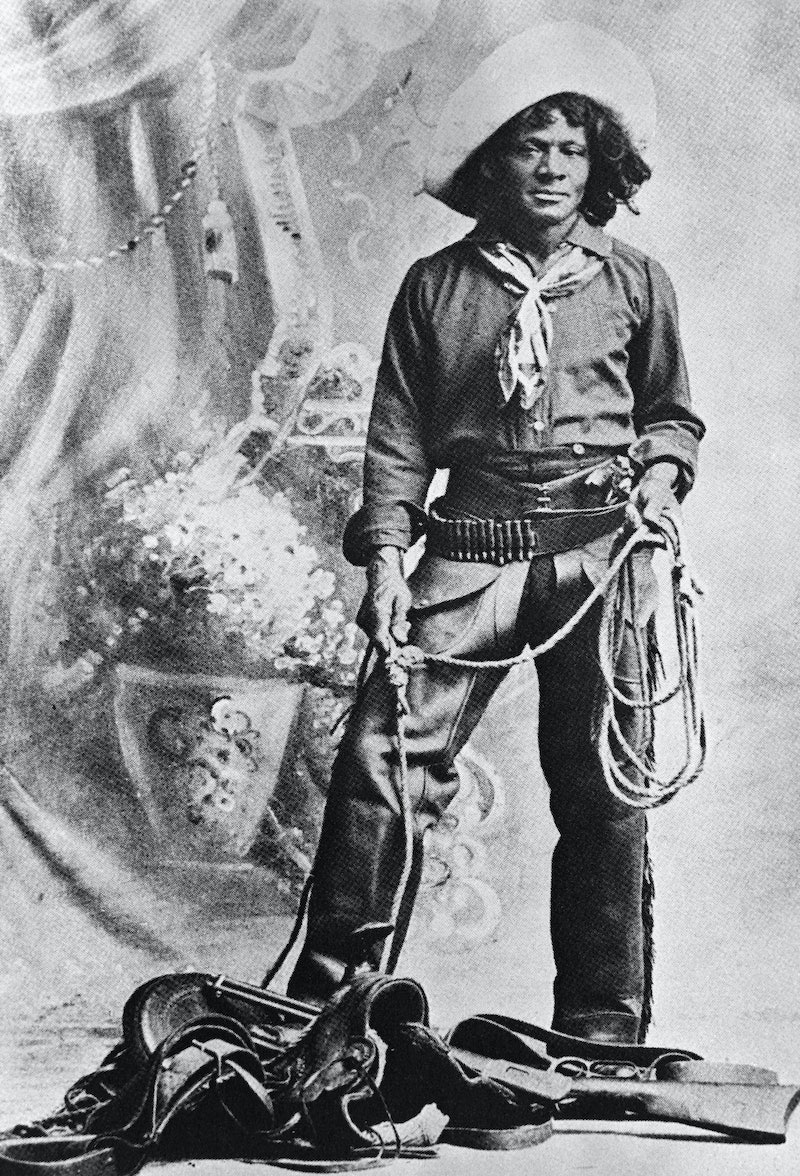 Nat Love is already probably America’s most famous Black cowboy — and with the premiere Netflix’s new film, The Harder They Fall, he’s about to gain even more popularity.

In the movie, Love (Jonathan Majors) is an outlaw who tracks down his enemy Rufus Buck (Idris Elba) with the help of his former lover Stagecoach Mary (Zazie Beetz). In real life, Love was a cowboy, not an outlaw, who worked in the Old West for many years before settling down with his wife, Alice Love, and retiring. And though he claimed to have met a number of famous people, neither Buck nor Mary seem to have been among them.

Love’s real life, however, was plenty compelling. In his lengthy autobiography, Love detailed his many (potentially fictional) adventures, preserving them for future generations. Below, what to know about the real Nat Love.

Love was born in Tennessee in 1854. After he and his father were freed following the Civil War, they worked as farmhands; the two even tried to establish their own local farm, until his father passed away after a brief illness when Love was 15. Love had developed an early talent for breaking horses, and he subsequently headed to Kansas to find work driving cattle.

Loe eventually met cattlemen from Texas and joined their group, working primarily around Texas and Arizona. During that time, he claimed he became an expert marksman, developed fluency in Spanish, and earned the nickname “Red River Dick” after proving he could ride a bucking horse. Over the course of his life, he claimed to have been shot 14 times.

In 1876, Love traveled to Deadwood, South Dakota, to deliver 3,000 cattle. While there, he participated in a contest to see who could “rope, throw, tie, bridle, and saddle and mount” their horse in the shortest time possible. Love wrote that he won “in exactly nine minutes from the crack of the gun. The time of the next nearest competitor was twelve minutes and thirty seconds.” He added, “This gave me the record and championship of the West, which I held up to the time I quit the business in 1890, and my record has never been beaten.” As a result, he earned the title “Deadwood Dick.”

He recorded his larger-than-life stories in an autobiography.

Love’s Life and Adventures of Nat Love, Better Known in the Cattle Country as ‘Deadwood Dick,’ by Himself, was published in 1907. In his book, he claims to have met such famous figures as Billy the Kid, Buffalo Bill, and Jesse James, among others, and said that he was captured by Native Americans in 1876 before convincing them to spare his life and gaining their respect in the process.

“They soon gave me to understand that I was to marry the chief's daughter, promising me 100 ponies to do so, and she was literally thrown in my arms; as for the lady she seemed perfectly willing if not anxious to become my bride,” he claimed. But Love was eager to escape, so he snuck away from camp, mounted a horse, and rode 100 miles home without a saddle.

It’s worth noting that some of these claims should be taken with a grain of salt, as historians have questioned the veracity of some of his stories. Regardless, the book solidified his status as a legendary figure.

In 1890, a year after getting married, he quit work as a cowboy and became a railway porter for the Pullman Company, which satisfied his desire to see the world. He subsequently worked for a securities company in Los Angeles, and died in 1921.