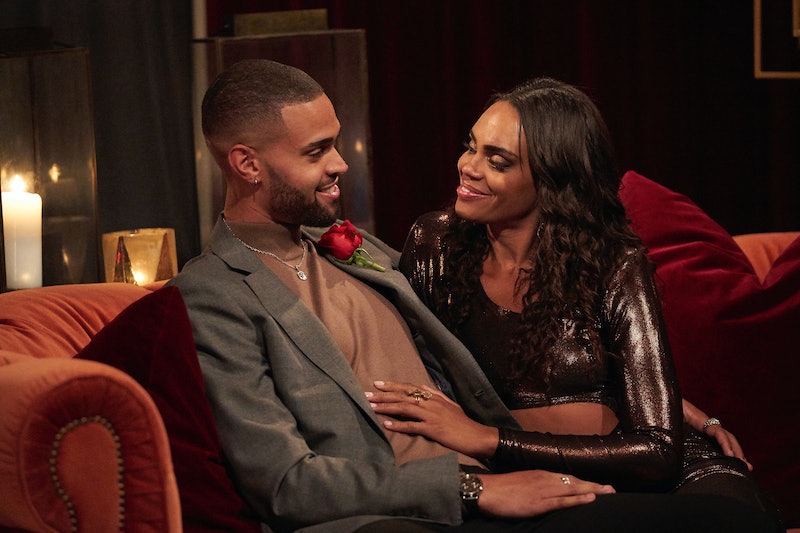 Hometown week is upon us on The Bachelorette, and frontrunner Nayte Olukoya already has a slight edge on the competition. Though he’s yet to meet Michelle Young’s family, he did get the chance to meet a few of her friends during their one-on-one date on Lake Minnetonka, so he’s past the hump of navigating potentially awkward introductions and lines of questioning about his intentions. Now the tables will turn, and Nayte will get to introduce Michelle to some of the closest people in his life.

Though Nayte’s social media doesn’t mention either of his parents, he’s opened up about them a bit throughout the season. Upon meeting Michelle, he expressed his adoration for her profession because his mother also works in the classroom. “I have crazy respect for teachers, and knowing that she's a teacher has me believing at least that she's a person that's going to want to have like conversations that are, you know, not superficial because that's what I'm looking for,” he told the cameras.

Nayte expanded on his family dynamic during an appearance on the Bachelor Happy Hour Podcast, explaining that he couldn’t relate to Michelle’s admiration of her parent’s marriage. “Something that really stuck out to me was talking about her parents being together for 33 years. That’s just beautiful. That’s what everybody aims for,” he said. “My parents got divorced when I was four, my mom and my stepdad, they just recently went through a divorce over the last two years, and I’m like, ‘Dang, I can’t relate. I want to relate but I can’t relate.” But despite not having a similar upbringing to Michelle, Nayte said he and his family are tight-knit, “I have such an amazing family but the whole happy ever and marriages that don’t end in divorce, that just wasn’t a part of me growing up.”

Viewers got a quick look at Nayte’s parents in the trailer for the Nov. 30 episode of The Bachelorette, and things got emotional fairly quickly. The short promo shows Natye and Michelle on a paddle board (apparently these two love dates in the water), and Nayte reveals to Michelle that he’s “head over heels about [her].” But the good times don’t last. Nayte’s mother tells Michelle that he’s never been in a relationship, while his father says Nayte isn’t “there yet” and he doesn’t want Nayte to hurt himself or Michelle. There’s also a shot of Nayte cryptically and disappointedly saying “it became this whole family dynamic” before tucking his head into his jacket to cry. Obviously it could be tricky editing, but this could mark the first bump in Michelle and Nayte’s otherwise smooth relationship.