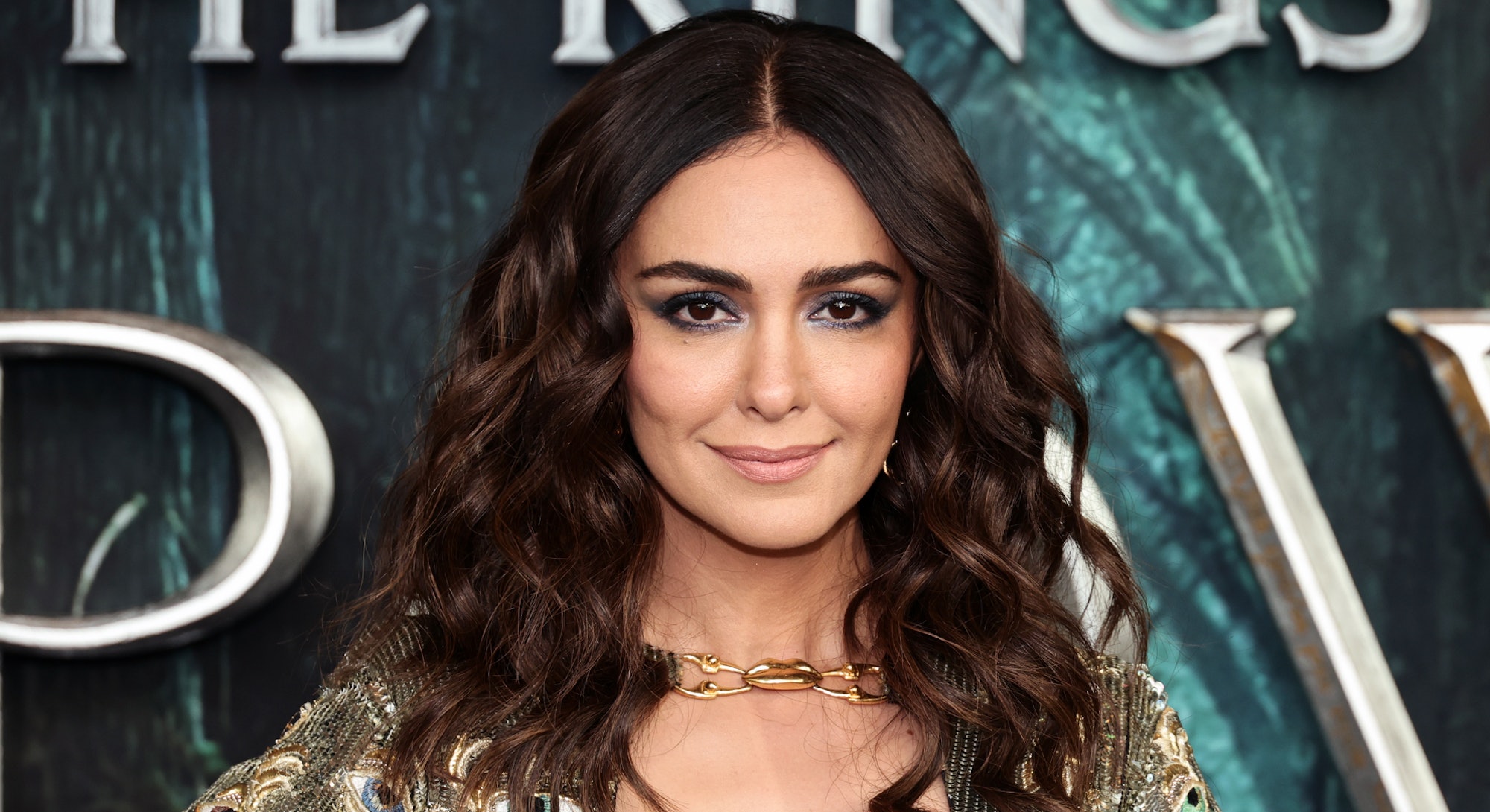 “I thought, ‘I’m the luckiest actor alive,’” Nazanin Boniadi recalls of her first moment setting foot on the iconic set for The Lord Of The Rings: The Rings Of Power. “I’m pinching myself because I keep remembering that my first comedy was How I Met Your Mother. My first drama as a series regular was Homeland, and now this is my first fantasy.” The actor is sitting across from me in a London hotel room on the same week the series is set to premiere on Prime Video. Far from just another new release, this one has made the history books as the most expensive TV production ever made.

The enormity of the occasion is not lost on Boniadi, who was an infant when she and her parents moved from their native Iran to London as political refugees, seeking sanctuary from the fallout of the Iranian Revolution. Reflecting on just how far she has come in her 16-year career, she notes: “I started acting in a post-9/11 climate. And if you told me I’d be sitting here today, starring in the biggest TV production ever made, it would be hard for me to believe, because the early days were filled with cliché, stereotypical roles. How refreshing that I can just play a person and not have to be defined by race, ethnicity, or creed.”

The hard-earned opportunity has come at the right time for Boniadi, who admits she’s now truly in a place when she can fully embrace the magnitude of the series, whilst handling the pressures that inevitably come with it. We meet before any of the reviews have dropped, but it’s not something of great concern to her. “I learned, in the first two or three years of my career, that if you believe the good, then you’re going to believe the bad, by default. The key for me is if I know who I am and that I’m doing the best job I can given the circumstances, then the rest of it is just noise.”

It’s this kind of level-headed, spirited approach that makes Boniadi the ideal person to bring Bronwyn to life. A human village healer from The Southlands, a neglected area of Middle-earth steeped in a conflicted history, Bronwyn refuses to follow the herd. Instead, she follows her heart, doing what she feels is right and best for her people. While her fellow villagers are distrustful of the elves who watch over them, single mum Bronwyn isn’t perturbed by the idea of the “other.” In fact, she develops deep feelings for a Silvan elf called Arondir (portrayed by Ismael Cruz Córdova), and their forbidden love story forms an integral part of the series’ multilayered plot.

That was the driving force behind me wanting to do the role, it was Bronwyn’s love for her people, this need to liberate them. I can relate to it as a human rights activist for my homeland Iran.

Bonaidi and Córdova share a palpable chemistry on-screen as they enact their characters’ stolen glances and slight touches. And while the actors didn’t meet for an industry standard on-camera chemistry test prior to landing their roles, Boniadi felt a natural affinity upon their first encounter. “Each one of us has faced obstacles, be it through representation or the stereotypical roles we’ve had to overcome. And here we are today breaking the rules of what these characters can and should be,” the actor explains. “I think it’s quite magical that we’ve been cast together in this story. There’s a deep understanding and connection there.”

Boniadi also felt an instant kinship with her character. “She’s a healer, and I was pre-med,” she tells me, referring to her undergraduate degree in biological sciences from the University of California’s Irvine campus. “That’s why sometimes I call Bronwyn the fantastical version of myself.” But it was Bronwyn’s rich history that really resonated with the actor, enabling her to deliver the performance needed to aptly portray the character’s intricacies. “Her ancestors had notoriously chosen the side of evil over good, and her people are now paying the price for that. Bronwyn wants to redeem them and free them from the shackles of their past,” Boniadi explains, intently. “That was the driving force behind me wanting to do the role, it was this love for her people, this need to liberate them. I can relate to it as a human rights activist for my homeland Iran.”

While Boniadi’s activism may appear to be a million miles away from the world she inhabits on the small screen, she got to unite her two passions at the London premiere of The Rings Of Power. The actor chose to mark the occasion by inviting ex-Iran detainees Nazanin Zaghari-Ratcliffe and Anoosheh Ashoori to be her personal guests. “I was really proud to have Nazanin and her husband Richard Ratcliffe, and Anoosheh Ashoori and his wife Sherry Izadi there. My own family forfeited their tickets so that I could invite them,” Boniadi shared, explaining the moment was extra special for Ashoori, who happens to be a major Lord Of The Rings fan.

Those familiar with the original material by J. R. R. Tolkien will know that Boniadi’s character is a new face, created specially for the TV series. But she more than makes her appearance in Middle-earth known. In Episode 2, the healer rushes back to her village to warn her neighbours that the orcs are coming to spread their evil. We must run, she says. But the men in the local tavern dismiss her and ignore her pleas. Bronwyn returns home to find her teenage son Theo (Tyroe Muhafidin) hiding in a cupboard as a murderous orc ransacks their home. Bronwyn, helped by her son, fights back, and after a vicious brawl, she beheads the orc. She then returns to the tavern to her naysayers, and slams the orc’s head down on the table. It’s a standout moment, and one that shows just what Bronwyn is capable of, when pushed. It was also incredibly enjoyable for Boniadi.

“It was so satisfying to walk into that tavern and have that moment,” the actor recalls. “I’m hoping that every woman, whose voice has not been heard, can relate to that moment of, ‘Oh, you didn’t believe me. Here it is. Here’s the evidence.’” As for the months of stunt and fight training that went into that scene and others like it, Boniadi says: “There were many battle scars. Every one of them was worth it.”

With Bronwyn playing a pivotal role in the overarching battle of good vs. evil, fans are eager to know what lies ahead for the character in Season 1 and beyond. (The series has already been renewed for a Season 2.) What can she tell us of Bronwyn’s personal journey and her romantic future with Arondir, I ask. Although Boniadi, much like her co-stars, has been sworn to secrecy regarding any specifics, she does indicate that her on-screen future looks hopeful. “Bronwyn is driven by love; her love for her son, for Arondir, and for her people,” the actor muses. “That makes for a brilliant character. And if you’re driven by love, you’ll find a way through.”

As for Bonaidi, she’ll be moving forward with a renewed sense of self, and it’s all thanks to Bronwyn. “I love how she is both nurturing and extraordinarily strong-willed. Sometimes, I forfeit my strength when I want to be softer and compassionate. But you don’t have to sacrifice one for the other,” she deliberates. “I think women can be all of those things. The idea of that existing for a woman in a multifaceted way is brilliant to portray on screen, but it’s also lovely to learn from in real life. We don’t have to apologise for being more than one thing.”