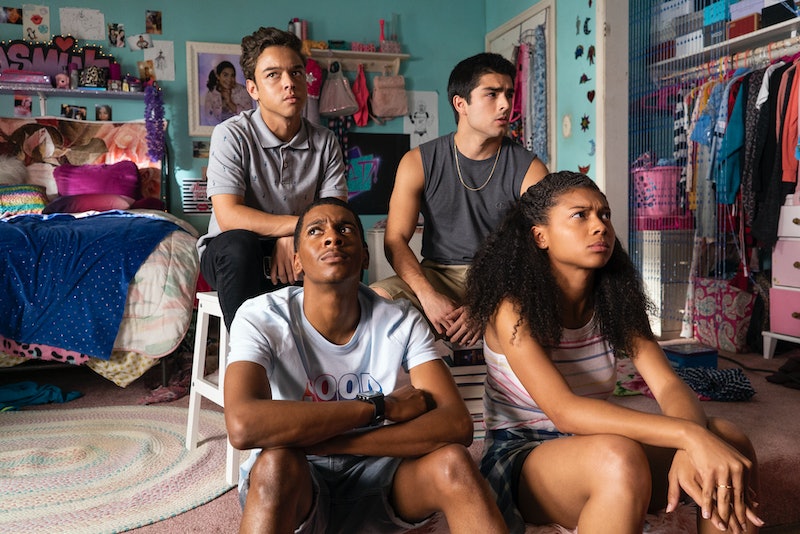 The kids are alright in Freeridge. The young adult Netflix series On My Block is ending its run with its fourth and final season. However, the spirit of the show will live on with its own spinoff called Freeridge. The series announcement arrives days ahead of On My Block's fourth season premiere, airing on Oct. 4.

On My Block is a series fraught with harsh circumstances of inner-city life in the fictional town of Freeridge. From the passing of Ruby’s cousin Olivia in Season 1 to gang affiliation, this show covers a lot. In addition to the raw way in which these topics are handled on the show, the cast's diversity has also been celebrated. Prior to Season 3, actor Sierra Capri, who plays Monse Finnie, told Bustle that she was “just glad that we’re able to represent kids who don’t get a voice.”

Now with Season 4 available on streaming and the announcement of Freeridge, fans will have more questions about how On My Block ends and where Freeridge begins. Here’s a look at what’s to come on the upcoming new Netflix series.

According to a statement from Netflix, the plot of Freeridge will feature “a new crew of friends who may or may not have unleashed a deadly curse, kicking off an unforgettable adventure.” It sounds like this spinoff is going to dive more into the supernatural versus the realistic gang rivalry seen between the Santos and the Prophet$ of On My Block.

In addition, Freeridge co-creators and co-showrunners Jamie Uyeshiro, Eddie Gonzalez, and Jeremy Haft revealed the series will be a more “female-driven show.” Oh, and if you’re a fan of the lovable “gnomies” seen in On My Block, they may just appear in Freeridge.

Netflix promised that stories about a “new Core Four,” not unlike the main characters of On My Block, will be in the spotlight. In a press statement, Netflix Head of Comedy Tracey Pakosta said, “While this chapter is closing for our OG squad this October as they reach the end of High School, we are excited to bring a brand new cast of characters and stories to life in this On My Block spinoff. She then added that “there are so many more stories to tell in Freeridge” before expressing her gratitude for continuing the journey with co-creator and co-executive producers Lauren Iungerich and Jamie Dooner as well as Gonzalez, Eddie, Uyeshiro, and Haft.

On Oct. 8, the spinoff cast was finally revealed. The troublesome foursome will include Bryana Salaz (The Voice), Keyla Monterroso Mejia (Curb Your Enthusiasm), Ciara Riley Wilson (LA’s Finest), and Shiv Pai (Uncut Gems). According to a press statement, they will be “filling these roles after making an appearance in the series finale episode of On My Block,” so be on the lookout for any clues about their characters while you watch.

As for the rest of the On My Block cast viewers have come to know and love, there’s no telling whether any of them will make a special appearance on Freeridge. Still, the exciting prospect of new characters makes the wait for the series even more worthwhile.

A release date for Freeridge hasn’t been announced, and a trailer has yet to drop. Still, with the premiere of On My Block on Oct. 4, the new show could debut sometime in 2022.

This post will be updated with more information about Freeridge.

More like this
Netflix Reveals First Look At Wednesday In The 'Addams Family' Spinoff Series
By Bustle Editors
Nicola Coughlan Shared A Lady Whistledown Excerpt From ‘Bridgerton’ Season 3
By Grace Wehniainen, Alyssa Lapid and Sam Ramsden
A New 'And Just Like That' Table Read Pic Confirms A Key Character's Return
By Jack Irvin and Grace Wehniainen
'House of The Dragon' Episode 6 Will Take Place A Decade After Episode 5
By Kadin Burnett
Get Even More From Bustle — Sign Up For The Newsletter