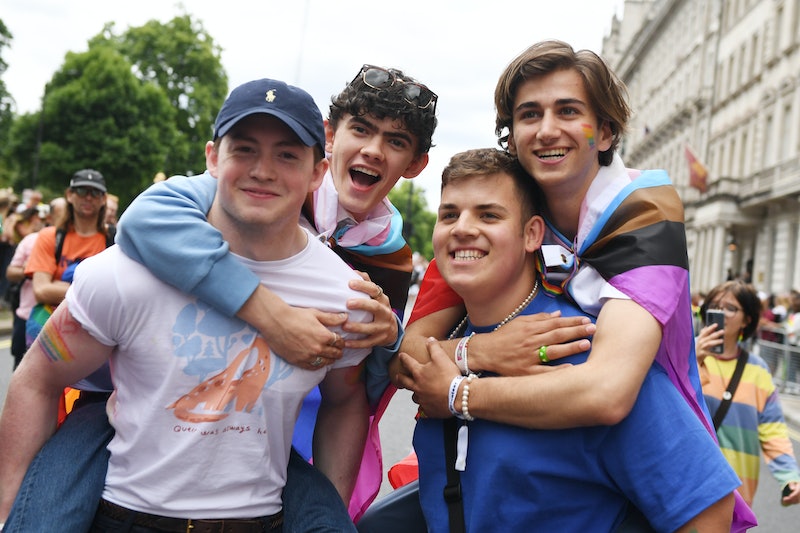 As London Pride returned to the capital over the weekend after two years away due to lockdown, revellers were delighted to see the stars of Netflix’s Heartstopper taking to the streets in support of the LGBTQ+ community. Kit Connor and Joe Locke, who play central love interests Charlie and Nick, marched hand-in-hand, gave each other piggy-back rides along the parade, and later danced the night away at Joe Lycett’s Big Pride Party.

Elsewhere along the Pride route, however, a group of anti-LGBTQ+ protesters were an unwelcome presence, and waved homophobic banners at those taking part. As a young Pride marcher nearby attempted to take away their signs, the cast of Heartstopper responded by giving the anti-LGBTQ+ protesters the middle finger, led by Joe Locke. They also danced in front of the group as Whitney Houston’s “I Wanna Dance with Somebody (Who Loves Me)” blared out of a speaker.

“Had to do my job properly,” Locke tweeted later on, as fans praised him for showing the protesters exactly what he thought of their bigotry. As well as Locke and Connor, a number of other actors from the show were spotted at Pride, including Jenny Walser, Sebastian Croft, Tobie Donovan, Corinna Brown, and Kizzy Edgell.

Meanwhile, Heartstopper, which was widely praised for its depiction of life as a young queer person and is based on Alice Oseman’s graphic novel of the same name, has been renewed for a second season. Oseman has also hinted that the show could run even longer, since there are four instalments in their original series. "It would probably be four seasons to cover the full story," they told Radio Times. "I haven't done any in-detail planning or anything, but it's quite easy to divide up the books into seasons, so four I think would do it."

Four whole seasons of our new favourite Pride protesters? We’re here for it.