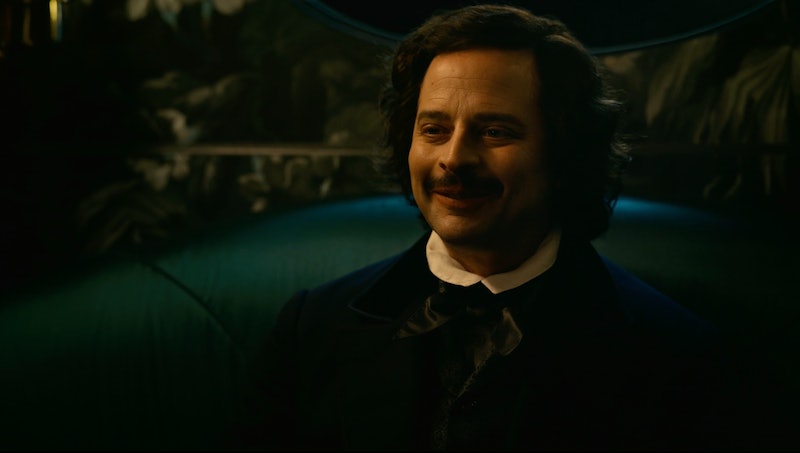 In the latest episode of Dickinson, Emily meets another inspiration to her — or at least, another famous writer. As she goes for a ride in Death’s carriage, she’s introduced to a very drunk, brazen, and also dead Edgar Allan Poe (played by Nick Kroll), who’s disappointed to hear she’s only read one of his poems.

Poe’s influence looms large over U.S. literary history. Known for works like “The Tell-Tale Heart” and “The Raven, Poe’s been lauded as the founder of the detective genre and a master of gothic literature. Like John Mulaney's portrayal of Henry David Thoreau, Kroll's Poe is also an exaggeration of the historical figure that ratchets up his absurdity.

By most other accounts, Poe was known as generally polite and meticulous in his work. But he did love to feud — usually with publishers or rival colleagues — and often misused alcohol to cope with the dire circumstances of his life. When he finds Emily in this episode, he’s much more willing to gloss over those hardships of his career and focus on the fame he achieved.

But given that Emily has spent this season pondering what it means to be famous and yield some control over her work to the outside world, Poe is in many ways the perfect author for the show to consider.

Like Dickinson, Poe had big ambitions, but his fame and influence grew much larger posthumously. Although Poe ultimately did make his living from writing, he was fairly destitute throughout his life; when he died, his grave was unmarked for years. Some of his contemporary critics saw his desire to write for the market as a fault. Just like Emily is struggling to understand how fame complicates her work, Poe wrestled with control over his image.

Despite what Death says, Poe’s cause of death is actually still considered to have happened under “mysterious circumstances” (and also “very on brand” for a man known to have a problem with alcohol). On October 3, 1849, Poe was found delirious in the street wearing clothes that were not his. After making it to the hospital, Poe died four days later, with the cause of death reported by newspapers of the time as “congestion of the brain" or “cerebral inflammation” — common euphemisms for death by alcoholism.

Whatever actually caused him to be so drunk or hysterical is still debated. Some historians have even posited he was a victim of “cooping,” a method of voter fraud where a highly intoxicated victim would be carried from precinct to precinct casting fraudulent ballots.

More like this
Maxim Baldry Plays This Pivotal Role In 'The Lord Of The Rings' Universe
By Maxine Harrison
'Firefly Lane' Season 2 Will Be The Show's Last — But There's A Twist
By K.W. Colyard and Grace Wehniainen
Rhaenyra's Sons May Not Last Much Longer On 'House Of The Dragon'
By Grace Wehniainen
Laenor’s Fate On House of the Dragon Differs from The Book In One Crucial Way
By Kadin Burnett
Get Even More From Bustle — Sign Up For The Newsletter