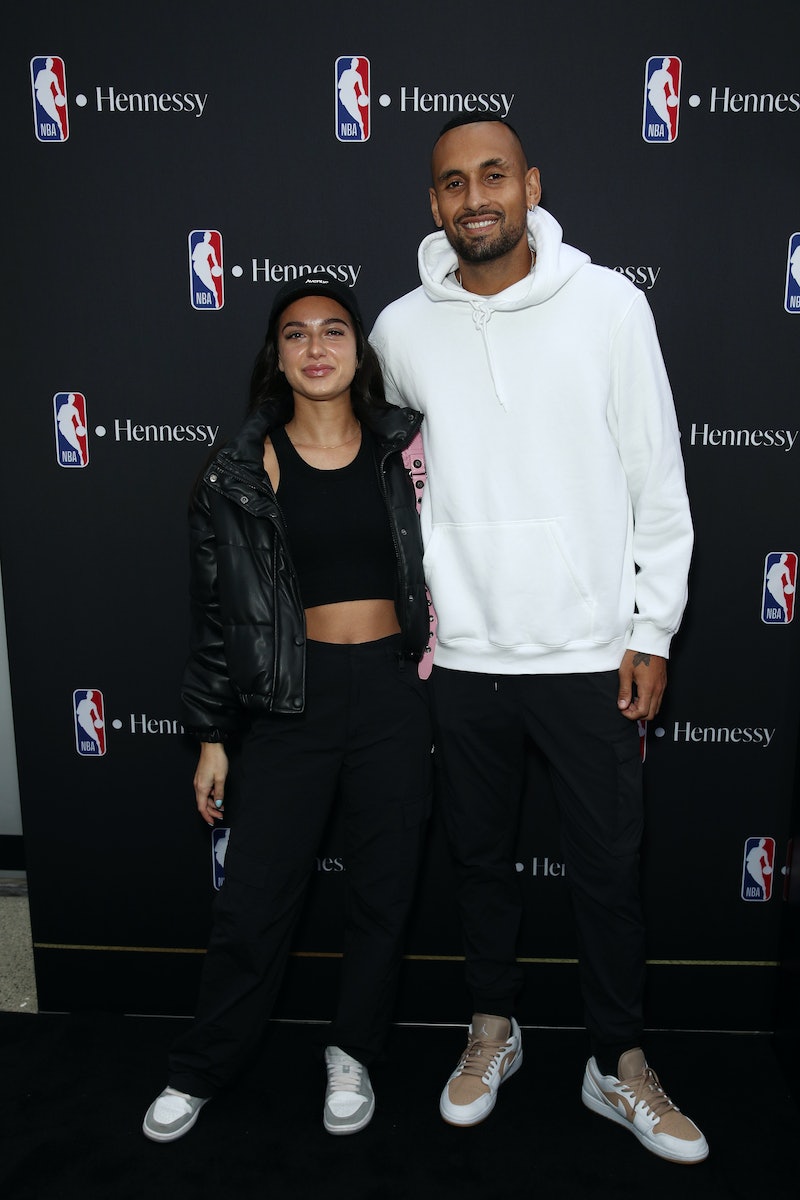 There are a lot of eyes on Australian tennis player Nick Kyrgios at Wimbledon 2022. One of the only players to beat each of “The Big Three” — Novak Djokovic, Roger Federer, and Rafael Nadal — the very first time he played them, he’s also well-known for his opinionated press conferences, on-court rants, and other controversial antics. Earlier this year, New Zealand’s Michael Venus branded the player an “absolute kn*b” after he claimed Kyrgios was encouraging crowds at the Australian Open to heckle and jeer. At Wimbledon, meanwhile, Kyrgios has been fined £8,200 after spitting at a spectator during his first round match against the UK’s Paul Jubb, and was branded a bully by Stefanos Tsitsipas after he cursed at an umpire during their third-round match, as reported by ABC.

Between matches, Kyrgios was spotted playing tennis with girlfriend Costeen Hatzi, and cuddling up courtside as he trained. But who is Hatzi, and how long have the couple been together? A fellow Aussie, 21-year-old influencer Hatzi is based in Sydney where she runs her own business Casa Amor Interiors, which focuses on minimal house decor. The pair apparently met for the first time when 26-year-old Kyrgios slid into the company’s DMs to ask about buying a mirror. “He was apparently scrolling through Insta and saw my business account post,” Hatzi wrote, on a now-expired Instagram story. “It was a professional/friendly conversation, and then he came to pick up the mirror from Sydney. I had no idea this was all a plan, I literally thought he was buying a mirror. He picked up the mirror and, as he would say, "it was love at first sight.”

The couple later sparked rumours of an engagement when Kyrgios used the ring emoji in an Instagram story posted in March 2022, and told fans that he plans on getting married “very soon,” during an Instagram Q&A.

The couple publicly unveiled their relationship in December 2021, and have since been regular fixtures on each other’s Instagram accounts. “You’ve been the biggest blessing in my life and I’m so incredibly thankful that I get to call you my best friend,” Kyrgios wrote in May 2022. “No matter what we do, I always get excited because I know that we are going to make every little moment enjoyable. There is nothing I love more than being able to make you laugh and seeing that amazing smile of yours.”

Meanwhile, on July 5, it was reported that Kyrgios has been charged with common assault against a former girlfriend in Australia. The alleged incident is said to have taken place in December 2021.

As new Sky News, a spokesperson for ACT Policing told press: "ACT Policing can confirm a 27-year-old Watson man is scheduled to face the ACT Magistrates court on the 2nd of August in relation to one charge of common assault following an incident in December 2021."

According to the publication, a legal representative for Kyrgios claimed that the athlete had not yet been charged as he has not appeared in court. The representative added that Kyrgios is "committed to addressing any and all allegations once clear".