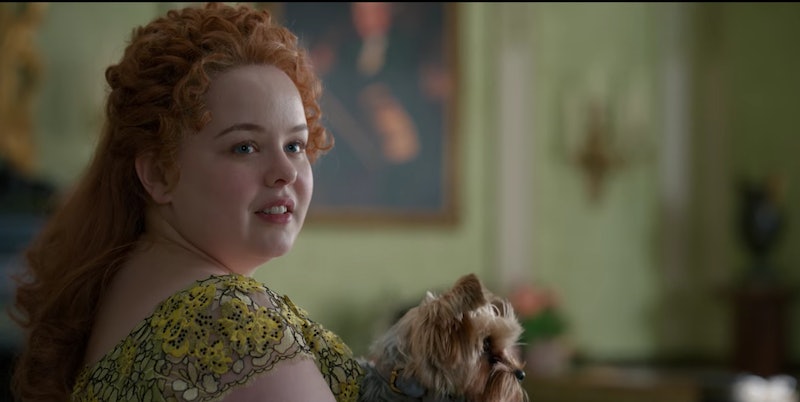 Spoilers ahead for Bridgerton. Who is Penelope Feathrington, does anyone really know? Star Nicola Coughlan helped fans uncover a Bridgerton Easter egg hidden in her character's first scene, noting that she provided an early clue for fans regarding the series' big mystery: the identity of Lady Whistledown. On Saturday, Feb. 20, Coughlan tweeted about the Bridgerton hint, writing, "Ok I’m just curious, has anyone spotted the massive Easter Egg about Penelope in the very first scene of Bridgerton?"

There were a number of incorrect guesses, but one fan tweeted the correct response, asking the actor if it was "the quill." Coughlan replied that it was, writing, "Ding Ding Ding!!" The Bridgerton star went on to quote tweet the correct response and explain, "When I filmed Penelope's first scene I chose a prop, a massive massive feather that looked a lot like... 'The quill.'"

The final episode of Bridgerton Season 1 included many surprising revelations, but among the most dramatic was the identity of London's foremost gossip columnist, Lady Whistledown. Eloise Bridgerton and Queen Charlotte spent much of the season collecting clues, suspecting Lady Danbury, a housemaid, and the dressmaker, Madame Delacroix, of holding the notorious role. The final seconds of the episode unveiled the narrator's true identity — Penelope Featherington, the youngest of the Featherington family, who was able to blend in unnoticed amid the goings-on of high society.

Coughlan added on Twitter that she appreciated fans sleuthing skills, writing, "I’m very impressed with those that spotted it!" The Derry Girls actor also encouraged followers to keep looking for hidden clues, tweeting, "if you rewatch there are lots of little hints in there, let me know if you spot any more and I can confirm/deny."

The actor kept her promise, responding to a few more fan theories on Twitter. A viewer noted another hint in the Bridgerton dialogue on Twitter, writing, "Lady Whistledown talking about how it reached her ears about Marina & Collin as she's literally sitting there on the floor listening to them." Coughlin seemed to confirm this as well, sharing a GIF of Amy Schumer putting a hand up to her ear.

One other user tweeted at the Bridgerton star and asked if, "in the scene where penelope cries in eloise's arms after losing her father, was she actually crying because she was watching Colin leave?" Coughlan confirmed this plot point, tweeting, "Oh for sure 95% of that upset is about Colin, and a little for Lord F, but mostly Colin."