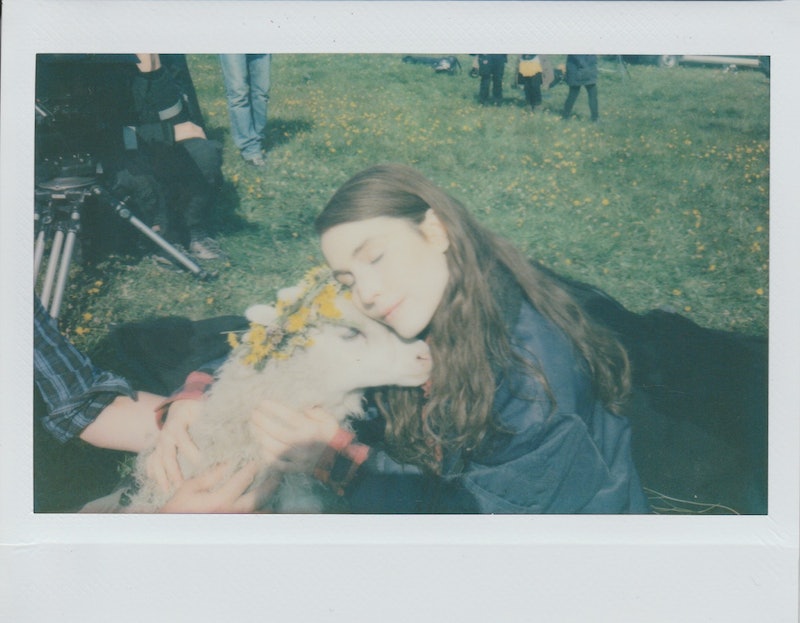 Noomi Rapace: actor, artist, mother of lambs. That’s how the 41-year-old Swedish actor will be known from now on (at least to me).

Rapace earned the latter title with her latest film, Lamb: a movie about a half-lamb, half-human baby. Unsure of how to digest the foreign fable, the American press has repeatedly labeled it “weird.” But just as its characters Maria (Rapace) and Ingvar (Hilmir Snær Guðnason) don’t care if others think it strange that they are raising the lamb-baby Ada as their own, the film resists such judgments. It insists that the chimeric child is banal, bringing Ada along for silent, long scenes of tractor-driving and fishing. And after hearing more about it from Rapace, I realize that Lamb isn’t actually weird. It’s just Icelandic.

“Growing up in Iceland, you're very aware of — my grandmother always talked about elves and fairies,” says Rapace, who spent roughly years of her childhood in Solheimar, a town founded in the 1930s as a refuge for people with disabilities, before moving back to her native Sweden. “And during Christmas, there's an evil witch called Gryla that comes on Christmas, and you kind of scare the kids with, ‘If you're not a good boy, or a good girl, the 13 Santa Clauses, they can come and take you, and they will punish you and stuff.’ It’s this overhanging threat of violence or being abducted,” she adds, laughing.

Folklore feels as real as anything — particularly in northern Iceland, where Lamb was filmed. “We shot in the valley — you drive into the valley, you lose phone signal. There’s an hour to the nearest gas station there. So you're like, this civilization and technology, it just feels like a strange dream. It’s so far from that reality.” Get far enough away from society, and its norms and strictures begin to lift.

So while to many, seeing a ewe give birth to a lamb chimera — not to mention Maria’s recurring nightmares of wild-eyed sheep herds — might seem scary, it isn’t to everyone. Director Valdimar Jóhannsson has insisted that Lamb is not a horror film, and Rapace agrees. “I don’t think it belongs to any category. Maybe we have a lamb genre from now on, you know?”

Below, Rapace reflects on her character, the primal nature of motherhood, and, of course, lamb babies.

You often do physical preparation, like exercises or movements, to prepare for roles. Did you do anything like that to play Maria?

I was spending time at farms and driving tractors, walking a lot, and isolating myself. I didn't interact with people much when Maria was living in me. She took me on: She basically felt like she hijacked my body and mind a lot. I couldn’t sleep, had problems sleeping. Also, we shot in the summer in Iceland, and it never goes dark. So in the middle of the night, it's like full-on daylight. So your body doesn't know what to do. But I couldn’t ... it was more the other way around, that the things I would normally do, I couldn’t do, when she was living in me.

Between this movie and Prometheus and Daisy Diamond, you've played a lot of characters who have complex experiences of motherhood. What is it about these stories that you’re drawn to?

I mean, motherhood feels like almost like the most, the deepest primal place, where I found myself as most violent and most raw, where your mind and your thoughts and your analytical side is kind of just cut off, when the instincts in you take over. And I’m very fascinated by that kind of terror balance, and the beautiful marriage between those two extremes — like our awareness and when we just become something so primal, when something overrides our system. And in the end of the day, we are animals. It becomes quite obvious as soon as there’s a crisis. If there’s a catastrophe or [something] like the coronavirus, people just go out and rampage, filling up their homes and protecting their whole families and kids. And I find that break point really interesting, when we stop being civilized and something else takes over.

[There’s] also great power in that. The strength in that is so powerful, and you can move mountains, and you will do anything to protect your child and your family. And that, I find really beautiful, if it’s handled right. You know?

Have you experienced that yourself, when your child is briefly in danger or something?

Every time there was a situation when my son was younger. I mean, he cut himself on a piece of glass and his face. He was 2 or 3, and there was blood everywhere. And I just became super calm and I just patched him up. I was in pajamas and running down the street into emergency center. I was like, “Move! Move!” You have to queue over there. I was like, “I’m not going there.” I was just like the mother sheep, coming in. [Laughs.] It’s like, “You have to stitch up my kid. I don't know how deep it is. I don't know if it's his eye.” And then you’re not rational anymore. It’s like the lioness in you.

And it happened a couple of times. And that side of me can kick in with friends as well, like family. I remember when I was younger, and it was some situation in the nightclub, and a man was really overstepping and quite aggressive with one of my friends. And I stopped thinking, and I just kind of protected her. Just like, “I don't care what happens to my body, I'm the shield between this danger and you.” So I have a lot of that. I feel like I've always been very connected with that side of myself — sometimes too much.

So in terms of the filming, were you mostly cuddling a real lamb? Or a CGI stand-in?

We didn’t have CGI at all. It was a mix of real babies and real lambs and sometimes puppets. We had a guy who was like, basically with a lamb head on his hand doing things, just walking in the door and stuff when we just had to look at something. But when I was interacting and acting with Ada, it was a lamb or a baby.

They don't do what you want them to do. I mean, you have to be very patient. It was a hard shoot in that way. It felt like we were always waiting for the lamb to fall asleep. And the whole crew is outside of the house. And the lamb caretaker is like, “It’s low on batteries now.” So basically, finally after 20 minutes, the lamb is sleeping. And then they call in the team. And everyone's tiptoeing in, and they hand over the lamb to me. And I'm like, “Okay.” And then they roll camera and action. And I'm just standing there. And then the lamb opens his eyes and, “Baa.” And every one out. Let’s start again.

I was thinking that when I was watching. They always say that children and animals are the things you don’t want to film with. And there were plenty of both.

At any point, did you look at that baby lamb and think, “This baby lamb is so cute. I’m going to raise it as my own little baby?”

Yeah. I mean, that is the strange thing. After halfway in, I stopped thinking about Ada as something strange. It was very much just a part of me. And it was a scene we’re shooting, when we shot ... Do you remember when I put a flower crown on her? We’re sitting outside, and the lamb just started breathing with me. And she put her face really close to my face, and she was stroking me. And I was breathing, and she was breathing in the air that I was blowing out. It was this very strange, a powerful connection. And Valdimar didn't say, “cut.” Everyone was just looking at this strange thing happening between me and the lamb.

Did filming Lamb make you want to hang out with animals more, or less?

[Laughs.] It makes me want to do more art house films. And if they contain animals, fine, I'll go with that. I prefer humans though. But no, I like to be challenged, and I embrace complex situation, and I like to force myself to be out of control. And that's a good way to do that. Working with animals and kids, you just have to be open. It's like, you never know what's going to happen, and you can't plan anything. I mean, that's how we should be in life, I would say, in relationships and in most situations. I’m so tired of politeness and empty words. I’d rather hang with animals then.

This interview has been edited and condensed. All photographs are courtesy of Noomi Rapace.