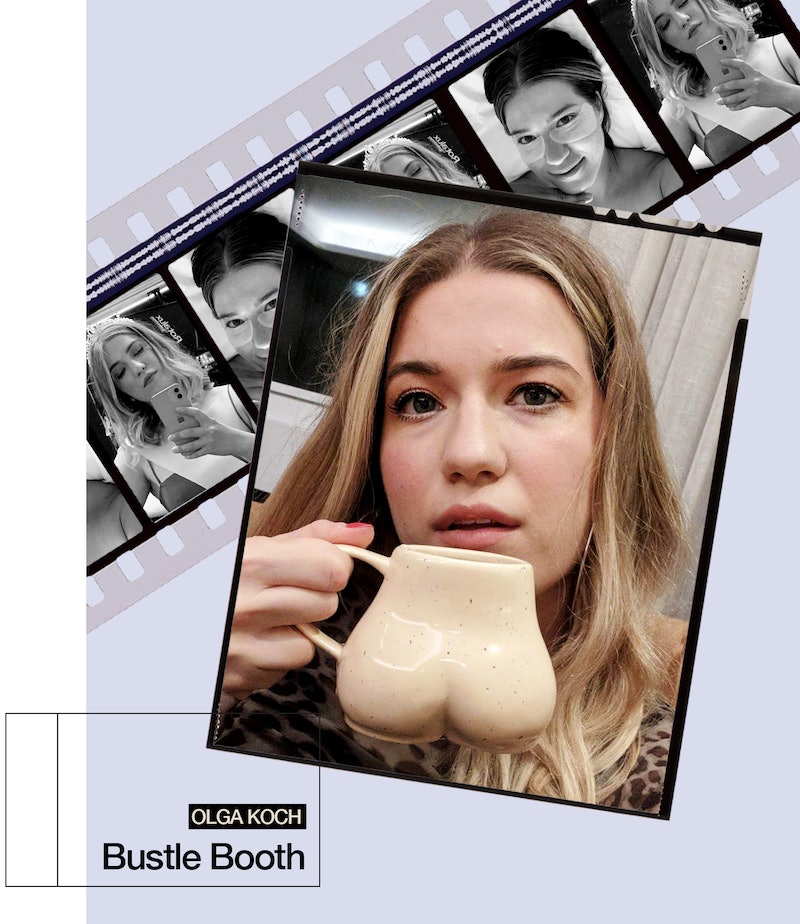 UK comedy fans will definitely recognise Olga Koch. Along with multiple appearances on shows like Mock The Week, QI, and Richard Osmond’s House Of Games, she’s also been on the stand-up circuit for many years and, in 2018, was nominated for Best Newcomer at the Edinburgh Fringe for her show Fight. It may come as a shock, then, to learn that up until a month ago, Koch still hadn’t quit her day job in computer science. Like lots of live performers, she was thrown slightly off course by the pandemic.

“I have been doing comedy to some degree since university,” Koch, who graduated from New York University in 2014, tells me over the phone. “But it wasn’t until March 2020 that I quit my other job to really pursue it. I was like, ‘I'm ready to go full time.’ And the world was like, ‘I don't f*cking think so.’”

I’m surprised, I tell her. It’s strange to think that she was doing office work during the day and then spent her evenings at a TV studio or performing to packed-out rooms (or Zoom calls, as was the case for 2020). “What I learned over time is that no one cares,” Koch laughs. “I put Mock The Week on my CV. No one asked me about it.”

Luckily things are back on track for the performer. Koch is about to start a country-wide tour with her new show Homecoming, including gigs at huge venues such as London’s Soho Theatre and the Brighton Komedia. Homecoming is a show about immigration, with a focus on Koch’s own story. The comedian was born in Russia but left at the age of 13. Her father Alfred – who served briefly as the deputy prime minister for Russia – had to flee the country after speaking out against Vladimir Putin. The family eventually settled in Surrey and Koch attended The American School In England. She became a British citizen in 2020.

Homecoming will explore Koch’s feelings about the immigration system and will question “how we identify and how fluid the very idea of nationality is,” she says. It will touch upon her experience of straddling three different cultures: Russian, American, and British.

Speaking about the latter, Koch says her “baptism” into Britishness came as a result of watching lots of budget reality TV. She was already a fan of American shows, but the the UK ones really spoke to her.

“I think the less polished a British reality show is, the more authentic it feels,” Koch says. “Like, I don't know, Five Guys in a Week. You watch that and you're like, ‘This is phenomenal.’ This is so not The Real Housewives and I love that. And, I mean, there’s a place in my heart for Selling Sunset but it’s no Take Me Out.”

Below, we delve even deeper into the world of reality TV and discuss Koch’s exact science for finding the perfect karaoke song.

What is your coffee order?

An Americano with a whisper of oat milk.

It's from the movie 10 Things I Hate About You and it's the part where the rager is about to start at someone's house and one of the nerds hears the doorbell and says, “That must be Nigel with the brie.”

Johnny Bravo. It was so inappropriate.

What's one movie or TV show you're currently obsessed with?

American Pie. Forever and ever. I love the original, obviously. And then there was a comfort in the first four, but all the spin-offs I'm not on board with. Actually, I think that's too harsh to say... All the spin-offs I just... they don't feel as sort of comforting as the four before.

If you had to be on a reality TV show, which one would it be?

The Bachelorette. But the key is, they always wait until the last episode to have sex. I'd have sex on the first episode. And also, during the first week or so, they will have the eligible bachelors and then they will have the crazy ones. Like, the people who show up in a huge bunny costume or the magicians or the ones that take pride in not bathing. They’re there for entertainment value and are really quickly weeded out. But my theory is, the ones that are crazy are probably the best at sex.

What's your go to karaoke song?

OK, so. I had COVID over Christmas and I got a karaoke machine so I wouldn't be lonely, my boyfriend got it for me as a gift. So I was like, “I'm going to go through every possible song and see what the best karaoke songs are.” And I have scientifically proven that “Dynamite” by BTS is one of the best karaoke songs ever. First of all, a karaoke song has to be a certain length. It doesn't have to be really short, but sometimes they go on and on. For example, “Just Like a Pill” by Pink. It's an incredible song but the ending? It's just a lot of the chorus and at some point you’re just going to give up. Another thing is that the perfect karaoke song has to build. If it's a song that's consistent throughout, it's going to get boring. You need a real climax to it. You also don't want to go too popular. You don't want to be like... I don't know, “Hit Me Baby One More Time”. It’s amazing but it's too predictable. You want a song that people forgot they knew. And then it has to be audibly accessible. So if you're doing Celine Dion, it's good in theory, but you're never going to be able to sing it.

What is something that's inspiring you lately?

I mean, maybe I'm late to the party, but I read Detransition, Baby and found that very, very inspiring and I absolutely loved it.

What’s something that you would want people to say about you?

Olga Koch is touring the UK with Homecoming from September 6. Tickets and more info can be found on her website.

More like this
David Beckham’s Controversial Qatar Deal Skyrocketed His Net Worth
By Catharina Cheung
Rita Ora Finally Opened Up About Marrying Taika Waititi & Their "Perfect" Wedding
By Sophie McEvoy and Catharina Cheung
Emily Atack’s Net Worth Would Make Charlotte Hinchcliffe Proud
By El Hunt
Twitter Has Renamed Ekin-Su After *That* 'Dancing On Ice' Performance
By Sophie McEvoy
Get The Very Best Of Bustle/UK
Sign up for Bustle UK's twice-weekly newsletter, featuring the latest must-watch TV, moving personal stories, and expert advice on the hottest viral buys.