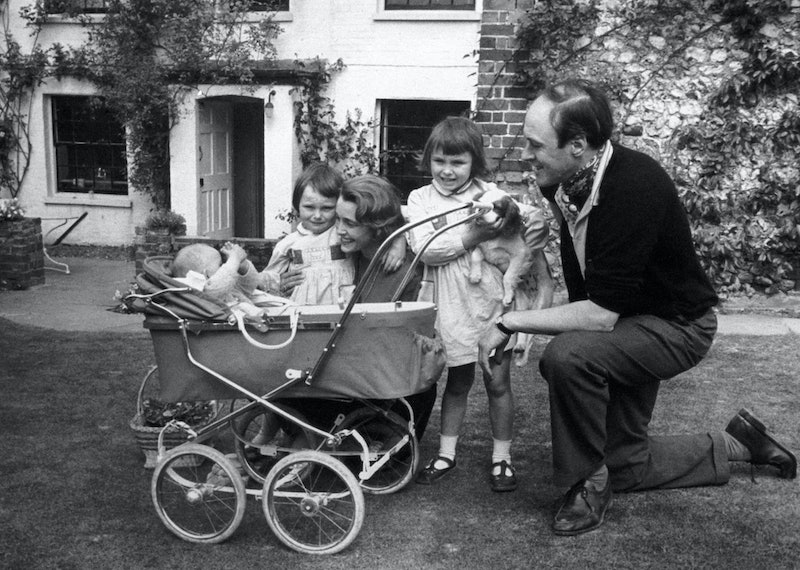 Inspired by Stephen Michael Shearer's An Unquiet Life, Sky's forthcoming drama To Olivia charts the relationship between a husband and wife (famed novelist Roald Dahl and Academy Award-winning actor Patricia Neal) as they struggle to cope with the tragic loss of their young daughter, Olivia. But, how did Olivia Dahl die?

Per the New York Times, Olivia Dahl died at the age of seven from encephalitis caused by measles in 1962. She was the eldest of Roald Dahl and Patricia Neal's five children (Tessa, Ophelia, Theo and Lucy).

As mentioned, the aftermath of Olivia's death is the subject of the Sky original film To Olivia, which depicts the "shared grief" between parents Dahl and Neal that winds up changing their lives forever. "It’s 1962 and Roald Dahl, an eccentric, burgeoning children’s author and his wife, Patricia Neal, a glamourous Hollywood movie star, have retreated to the English countryside to bring up their expanding young family," the show's official synopsis reads. "Tragically, their lives are turned upside down by the devastating death of their daughter Olivia and as the couple struggle through the unimaginable loss."

His daughter's death also inspired him to write an essay about the importance of vaccinations. Written 1986, 24 years after Olivia's death, he recounted the hours before she passed away. "Olivia, my eldest daughter, caught measles when she was seven years old. As the illness took its usual course I can remember reading to her often in bed and not feeling particularly alarmed about it," he wrote.

"Then one morning, when she was well on the road to recovery, I was sitting on her bed showing her how to fashion little animals out of coloured pipe-cleaners, and when it came to her turn to make one herself, I noticed that her fingers and her mind were not working together and she couldn’t do anything. 'Are you feeling all right?' I asked her. 'I feel all sleepy,' she said. In an hour, she was unconscious. In twelve hours she was dead."

He added: "Incidentally, I dedicated two of my books to Olivia, the first was ‘James and the Giant Peach’. That was when she was still alive. The second was ‘The BFG’, dedicated to her memory after she had died from measles. You will see her name at the beginning of each of these books. And I know how happy she would be if only she could know that her death had helped to save a good deal of illness and death among other children."

To Olivia stars Downton Abbey's Hugh Bonneville and Bodyguard's Keeley Hawes, appearing as the couple at the centre of this devastating true story. Outlander's Sam Heughan stars as Hollywood acting legend Paul Newman, while Game of Thrones actor Conleth Hill appears as American director Marty Ritt. Per the Express, Sky's To Olivia is also the final role of Geoffrey Palmer, who sadly passed away at the age of 93 in November 2020. In the film, Palmer portrays Roald’s headmaster Geoffrey Fisher, who later became the Archbishop of Canterbury after joining the priesthood.

The film was co-written and directed by John Hay (There's Only One Jimmy Grimble), and discussing the upcoming release, the Director of Sky Cinema and Acquisitions at Sky UK & Ireland, Sarah Wright, teased viewers can look forward to the real story of this seemingly "glamorous" couple.

"We are all familiar with the extraordinary Roald Dahl and Oscar-winning actor, Patricia Neal, but in To Olivia, audiences will discover the true story of the heartache and struggles the outwardly glamorous couple experienced prior to their immense success," Wright commented.