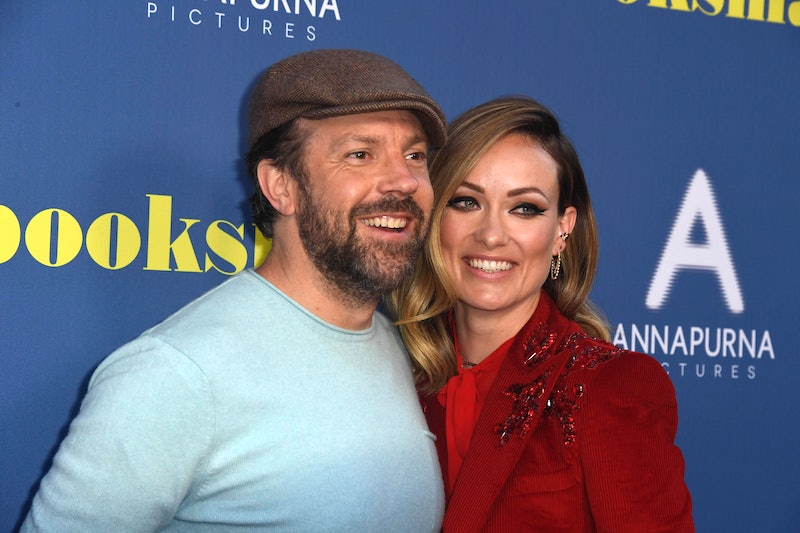 There are many favorite celebrity couples out there, and that list long included Olivia Wilde and Jason Sudeikis. It's hard to believe the actors have called it off after roughly eight years together, but the length of their relationship is proof that these two were very much committed to each other. If you're a fan and want to know more about the course of their love, Olivia Wilde and Jason Sudeikis' relationship timeline breaks down their many shared milestones.

It was pretty much love at first sight (more on that in a bit) for the Booksmart director and Sudeikis. That said, it took a while for Wilde and the former Saturday Night Live cast member to even exchange numbers. But, once they did, it got serious for the couple who was engaged for several years and had two children together.

They definitely seemed meant to be. For example, Wilde wrote about Sudeikis for his birthday in September 2017 on Instagram, "Last post before this guy's birthday is officially over in the East Coast and/or instagram shuts me down for copious displays of affection. Whatever, I crush hard. Find someone who makes you swoon. H B D, A B C, B B D." See? Meant. To. Be.

But, now that it's over, let's take a deep dive into their relationship. They may no longer be together, but Wilde and Sudeikis made one beautiful couple.

Based on two separate interviews both Wilde and Sudeikis gave in 2013 and 2017, respectively, the two met sometime in fall 2011. As Allure's October 2013 cover star (via USA Today), Wilde opened up about meeting Sudeikis at a Saturday Night Live finale party. "I met Jason, and I thought he was so charming," she told the magazine. "He's a great dancer, and I'm a sucker for great dancers. But he didn't even get my number."

The two repeatedly ran into each other after that, but Wilde had to make the first move. As Wilde recalled to Allure, one of her friends went over to Sudeikis one day and said, "This is Olivia's number. Use it." And "that was the beginning," she explained.

During an April 2017 appearance on The Late Show With Stephen Colbert, Sudeikis said about meeting Wilde, "I met her at a finale party for SNL. We hit it off that night." He continued,

I actually came off looking a little cooler than I really am because I had heard through the grapevine, through mutual friends who weren’t exactly her best girlfriends, who would report back, "Oh you know, I think she’s dating someone." So I didn’t make any moves. I was just very, very busy with other things. And next thing you know, I stopped being busy, she stopped dating someone, and then it was off to the races.

December 2011: They Made Headlines As A Couple

In December 2011, Wilde and the Drive actor first made headlines as a couple. At the time, a source informed Us Weekly that Wilde attended an SNL afterparty with Sudeikis on Dec. 4. "They walked in holding hands. She's come to the [SNL] studio at Rockefeller Center, and they've gone out to dinner after rehearsals."

That same month, they were also spotted for the first time together at University of Kansas Jayhawks basketball game in Lawrence, Kansas. According to People's report at the time, neither of their reps had comments on the dating rumors involving them.

October 2012: They Admitted They're So In Love

People reported in October 2012 that the former Vinyl star and Sudeikis were very much in love and also living together. During a These Girls monologue reading hosted by Glamour in New York City, Wilde admitted she was "blissfully, hopelessly, wildly in love" with Sudeikis.

December 2012: They Made Their Red Carpet Debut

It appears that the two made their red carpet debut (above) as a couple while attending the The American Museum of Natural History Gala in New York City in December 2012. That same month, Wilde also shut down engagement rumors. She tweeted on Dec. 13, "No, I'm not engaged, but I am at the Stones show and holy sh*t Ronnie Wood you got style, boy. It's just a fact. Trying to score a shoe pic."

January 2013: They Got Engaged

The two really did get engaged in January 2013, one month after engagement reports surfaced. A source told People about their happy news, "They are so excited. And very, very happy." Wilde also took to Twitter on Jan. 13 and shared a heartfelt tweet. She wrote, "Thanks for all the sweet congratulatory love, friends! And may I compliment your savvy use of that nifty engagement ring emoticon."

Nine months after they got engaged, a rep for the former House actor confirmed to Us Weekly that Wilde was pregnant with her first child.

April 2014: They Welcomed Their First Child

Pretty much two years after Otis' birth, Wilde announced she and Sudeikis were expecting their second child together. She also shared a cute Instagram of Wilde and Otis sitting on a bed together showing off their "Matching baby bumps."

This same month, Sudeikis discussed whether or not he and Wilde would be getting married anytime soon. He joked during a Watch What Happens Live With Andy Cohen taping, "We are good in many many ways. I believe that we won't get married until weed is legal in every state. Gosh darn it!"

As for Wilde, she told The Edit in February 2018 that she and Sudeikis weren't hurrying to have a wedding, especially since they both had previously been married. She also made it clear that they "are seriously connected. Before you have a child, marriage is the ultimate commitment and promise to one another, and then once you have a child, it’s like, 'Oh, we’re committed and promised already.'"

In October 2016, Wilde gave birth to baby girl. She announced their daughter's arrival and name with the most heartwarming photo. Her caption read, "There goes the neighborhood. Daisy Josephine Sudeikis. Born, like a boss, on #internationaldayofthegirl." For those unaware, Oct. 11 is International Day of the Girl.

Another major step they took in their relationship is when Sudeikis joined Wilde's directorial debut film, Booksmart. This marked the first time she ever directed him in a project. In April 2019, she discussed what it was like working with her significant other. Wilde told People, "That was great. He’s one of the best improvisers in the world so I knew I could cast him. He’s like spinning a top and just letting it roll. It’s really amazing to see him do his thing."

February 2019: They Still Prioritized Each Other

As parents, Wilde and Sudeikis made time for each other, too. While attending the opening of Alice by Heart in New York in February 2019, Wilde told Us Weekly that the pair still put in the effort to go on dates.

"We were both really social people when we met, and we didn't want to give that up when we became parents," the actor-director said, "so we're really consistent about our time with them, but we also prioritize a couple of date nights a week."

November 2020: Their Split Came To Light

With 2020 being, well, 2020, it fittingly marked the end of Wilde and Sudeikis' relationship. The couple reportedly broke up at the beginning of the year, but the news didn't break until November. A source told People that "it's been amicable and they've transitioned into a great co-parenting routine. The children are the priority and the heart of the family's relationship."

And there you have it. That's Wilde and Sudeikis relationship timeline. Even though they ended things, they had quite the journey and will remain tied together for years to come.

More like this
Dixie D’Amelio & Noah Beck “Love Each Other” Despite Breakup Rumors
By Julia Emmanuele, Jordyn Tilchen and Grace Wehniainen
Olivia Wilde Addresses *Those* Florence Pugh & Shia LaBeouf Rumours
By El Hunt and Sam Ramsden
Rita Ora Celebrates Finding Her "Fairytale" Ending With Taika Waititi
By Sophie McEvoy and Catharina Cheung
Clayton & Susie Broke Up, Citing "A Significant Amount Of Pain" After 'The Bachelor'
By Jordyn Tilchen
Get Even More From Bustle — Sign Up For The Newsletter

This article was originally published on May 24, 2019