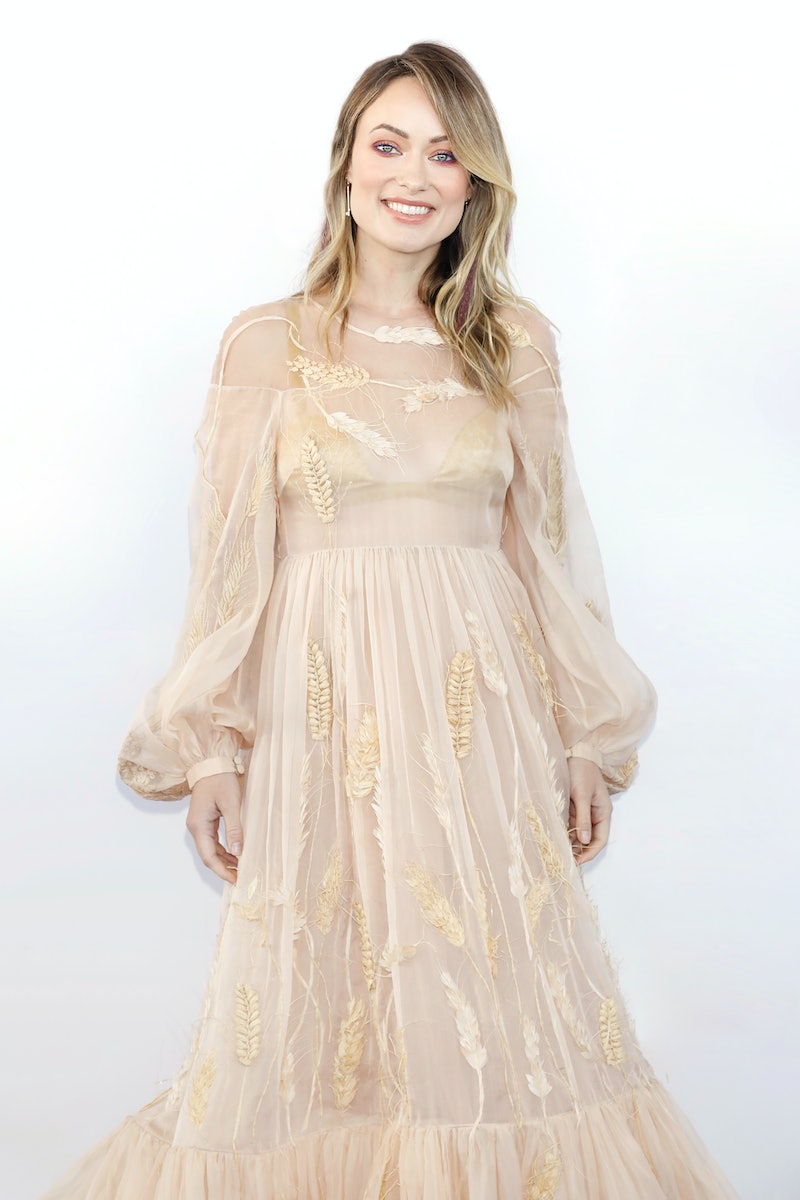 After months of remaining mum about her rumored boyfriend, Olivia Wilde is (finally!) gushing about Harry Styles on Instagram. Her tribute to the singer arrives as filming wraps on Wilde's upcoming film, Don't Worry Darling, the project which introduced the potential couple. Wilde's post for Styles is the latest in a string of shoutouts on her grid to various members of the production, including star Florence Pugh and cinematographer Matthew Libatíque.

The feature marks Wilde's second directorial effort, following 2019's Booksmart. She began her post by acknowledging the hurdle female filmmakers face in hiring male actors for supporting roles in their projects. "Little known fact: most male actors don’t want to play supporting roles in female-led films," Wilde explained. "The industry has raised them to believe it lessens their power (i.e financial value) to accept these roles, which is one of the reasons it’s so hard to get financing for movies focusing on female stories," she continued, adding, "No joke, it is harrrrrd to find actors who recognize why it might be worth it to allow for a woman to hold the spotlight."

That's when Wilde turned her attention to Styles and his role as "Jack" in Don't Worry Darling. "Not only did he relish the opportunity to allow for the brilliant @florencepugh to hold center stage as our “Alice”, but he infused every scene with a nuanced sense of humanity," Wilde wrote alongside a black-and-white photo of the actor sitting atop a vintage car. "He didn’t have to join our circus, but he jumped on board with humility and grace, and blew us away every day with his talent, warmth, and ability to drive backwards. 👊 #dontworrydarling." Wilde, 36, also tagged her rumored beau, 27, in the post.

This is the first time that Wilde has addressed Styles on social media, although they both follow each other on Instagram. The co-workers were first linked as a couple in early January, after photos of Wilde and Styles holding hands at his manager's wedding made the rounds online. A source told People at the time that Wilde and Styles have been dating "for a few weeks," and that romance blossomed while working on set. "What started out as a close friendship, quickly turned romantic," the outlet's source said. "Everyone saw it coming. During breaks, he's hasn't been able to stay away and visited her trailer."

That same insider claimed that Wilde, who split from her longtime fiancé Jason Sudeikis in early 2020, had been referred to as Styles' "girlfriend" amongst their circle of friends. Neither Wilde, nor Styles has commented on reports of a romance. However, the rumored couple appear to be going strong after their first Valentine's Day together. Page Six captured photos of Wilde moving bags into Styles' Hollywood Hills home from the residence she previously shared with Sudeikis, with whom she co-parents children Otis, 6, and Daisy, 4.

Alas, Wilde's doting words for Styles almost didn't happen. The former One Direction member reportedly replaced Shia LaBeouf, whom was fired by Wilde prior to shooting Don't Worry Darling. Luckily, the stars aligned for the first surprise celebrity couple of 2021.

More like this
Who Is Nick Cannon Dating & How Many Kids Does He Have?
By Jordyn Tilchen and Radhika Menon
Olivia Wilde Addresses *Those* Florence Pugh & Shia LaBeouf Rumours
By El Hunt and Sam Ramsden
Hailey Bieber Just Responded To *That* Viral Met Gala Moment
By Radhika Menon and Sam Ramsden
Adam Devine Hilariously Let Everyone Know He’s *Not* Accused Cheater Adam Levine
By Brad Witter
Get Even More From Bustle — Sign Up For The Newsletter