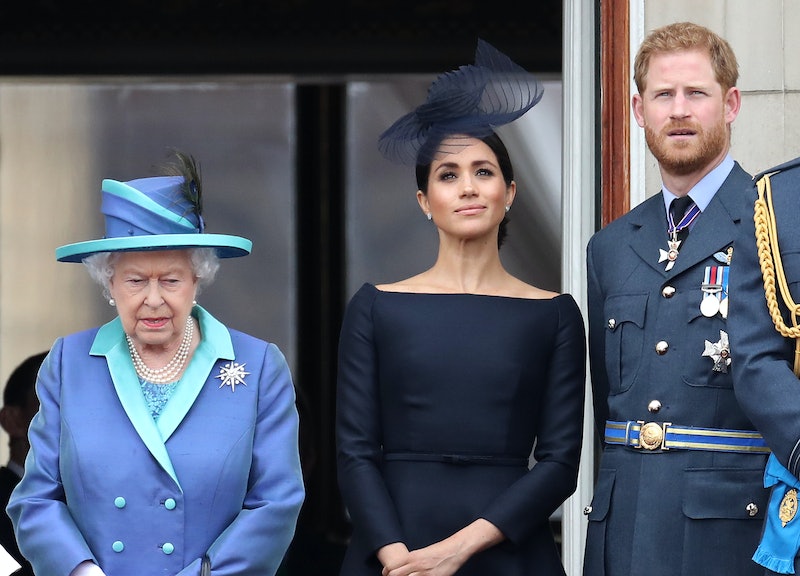 Oprah Winfrey isn't done spilling tea. Following her bombshell interview with Meghan Markle and Prince Harry that aired March 7 about their infamous January 2020 exit from the royal family, Winfrey revealed on March 8 that Queen Elizabeth and Prince Philip were not the Royal Family members who raised concerns about Archie's skin color before his birth in May 2019.

One of the biggest revelations from Meghan and Harry's interview was that royal family members had "several conversations" with Harry about "how dark [Archie's] skin might be when he's born" and "what that would mean or look like" for the image of the royal family. Meghan identifies as biracial, having a Black mother and a white father. Winfrey was just as shocked at rest of us, asking Meghan, "What? Who is having that conversation with you? What?"

However, the couple decided not to reveal the people involved in those conversations, with Meghan noting it would be "very damaging to them." While Harry also refused to share specifics, he did acknowledge how uncomfortable it was. "That was right at the beginning: what will the kids look like?" he revealed. "That conversation I'm never going to share. It was awkward. I was a bit shocked."

Following the interview, Winfrey appeared on CBS This Morning to speak with close friend and correspondent Gayle King, who just happened to lend her California home for the interview. Winfrey shared a message from Prince Harry, who wanted to make it clear to her after the interview that Queen Elizabeth and Prince Philip were not the family members who had those concerns about their then-unborn child's skin color. That child, Archie, will turn 2 on May 6.

"He did not share the identity with me, but he wanted to make sure I knew and if I had the opportunity to share it that it was not his grandmother nor his grandfather that were a part of those conversations," Winfrey explained. "He did not tell me who were a part of those conversations. As you can see, I tried to get that answer on camera and off."

Although the couple spoke at length about mistreatment from both members and advisers of the royal family, Harry did defend Queen Elizabeth and expressed that he felt his grandmother could "be manipulated" within the institution. He recalled a phone call he made to the queen after his and Meghan's invitation to visit her at Sandringham Estate was rescinded by a member of her staff following their royal exit.

"That night I said, 'I was thinking about coming anyway, but I hear you're busy,'" he recalled. "She said, 'Yes, there's something in my diary that I didn't know.' I said, 'Well, what about the rest of the week?' She says, 'That's busy now, as well.' OK. I didn't want to push because I knew what was going on." Reflecting on Harry's remarks, Winfrey said she thinks the royal family's staff have a lot of "influence and input" in their actions. "There are people surrounding the family who are advisers to the family, who have been there for a long time, and that's a part of the hierarchal structure."