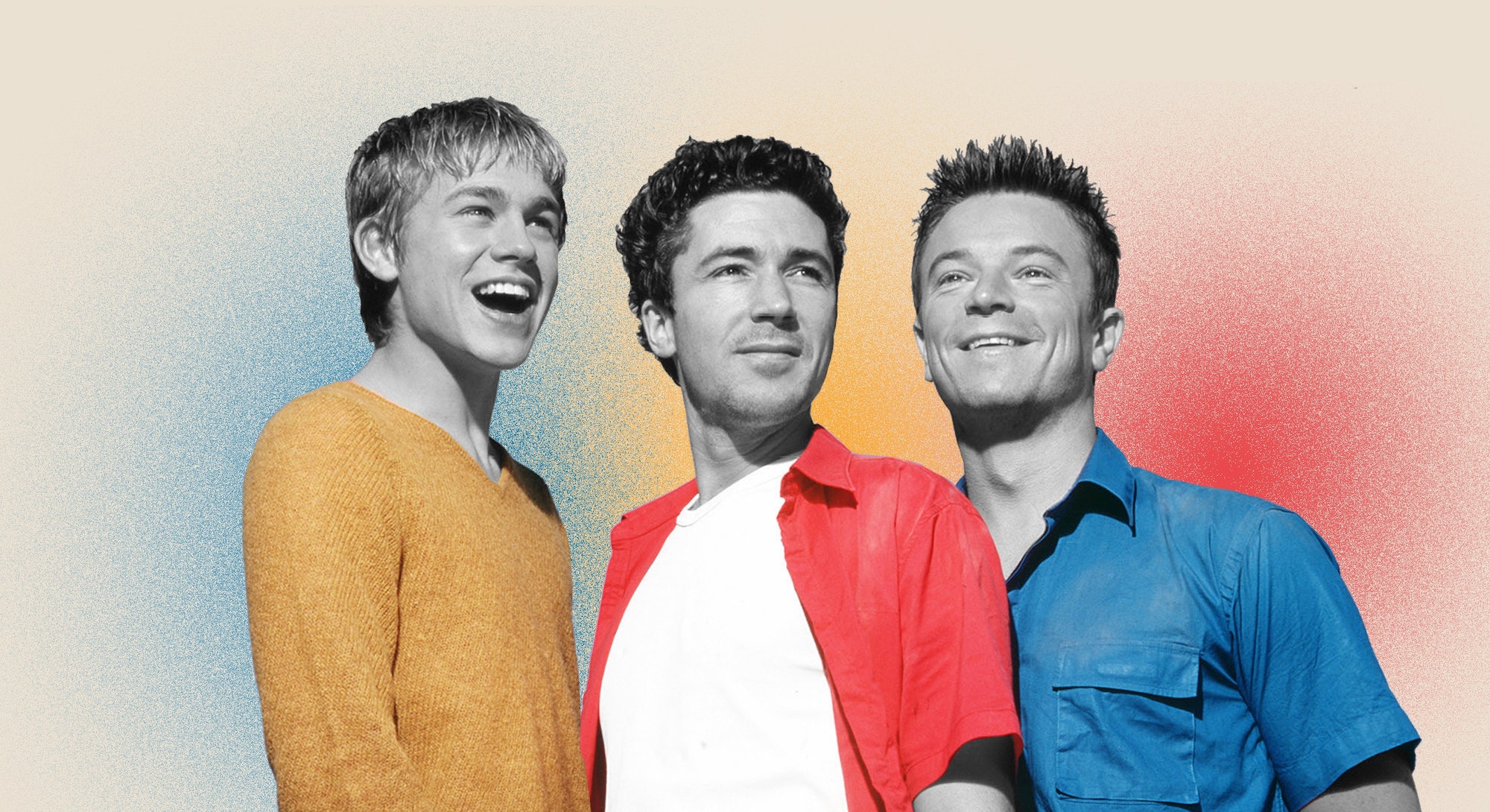 To call Channel 4’s Queer as Folk pioneering would be something of an understatement. Debuting in 1999, the series arrived at a time when Margaret Thatcher’s Section 28 legislation continued to prohibit the so-called promotion of homosexuality in British schools and when almost 50% of the population disapproved of consensual sexual relations between two adults of the same sex.

Created by screenwriter Russell T Davies (who went on to pen Years and Years and, more recently, It's a Sin), the show revolves around the lives of three gay men: the confident and overtly sexual Stuart (played by Aidan Gillen), his long-time friend and admirer Vince (Craig Kelly), and the fresh-faced high school student Nathan (Charlie Hunnam). Offering a depiction of British queer life against the backdrop of Manchester’s “Gay Village,” the series had a fearless approach to delving into a range of controversial themes, most notably drug use, underage sex, and homophobia.

With unfavourable attitudes toward gay people woven into the fabric of mainstream British society at that time, Queer as Folk sparked a wave of pearl-clutching from viewers and the media. Per the Guardian, the Channel 4 drama received more complaints than any other programme broadcast on TV at that time, with one reviewer from the Daily Mail writing:

“Queer As Folk proves that we need censorship. ... Certainly we shouldn't be at liberty to watch naked actors having relentless homosexual sex. Any nation which allows this without any voices raised in dissent is lacking in both wisdom and self-respect. It's hell-bent on destruction.”

The backlash became so strong, in fact, that by the show’s fourth episode, Beck’s Brewery decided to withdraw its sponsorship of the drama.

The Channel 4 production also garnered complaints from the very community it aimed to portray, with some LGBTQ+ viewers calling out the show’s decision to not explicitly address the HIV and AIDs epidemic, Attitude reported.

Amid the criticism, however, Queer as Folk was breaking new ground as the United Kingdom’s first ever gay-centric TV drama, quietly laying the foundations for a television landscape that would slowly begin to embrace LGBTQ+ storylines. Its legacy can be felt in shows such as Sugar Rush; The L Word; Feel Good; Love, Victor; and so many more.

Now, more than 20 years later, and in the wake of Davies’ record-breaking success with It’s a Sin, I wanted to take a look back at Queer as Folk and find out more about its creation. To do this, I spoke to leading man Gillen, who has gone on to star in other cult shows including Game of Thrones and Peaky Blinders, and the show’s BAFTA-award-winning executive producer Nicola Shindler, who recently set up a new production company, Quay Street Productions, marking a new chapter in her stellar career.

Below, Gillen and Shindler reflect on how Queer as Folk came to life and speak of their experiences working on a series that would change British television forever.

On The Birth Of Queer As Folk

In the late ’90s, Channel 4 set out to create a drama that put gay men at the forefront. When it approached Shindler, she knew just the man for the job. Luckily, Davies already had the perfect idea in mind.

Nicola Shindler: I’d set up Red Production Co. and wanted to work with Russell, and Channel 4 wanted to work with me and Russell as well. So I went to meet Russell and said, “What do you want to write?” And Channel 4 were saying, “Look, why don’t you write something where the lead characters are gay for a change, instead of the minor characters?” And Russell obviously had Queer as Folk in his head already, and he had the characters and the setup. So, it was all kind of waiting for him to put in on the page, and once he delivered the first couple of scripts, Channel 4 were really enthusiastic, and we were green-lit to go straight into production. ... Channel 4 felt like the right place because it’s a place where you can do a kind of cheeky, provocative drama that aims for a big audience but can be quite risque as well.

Aidan Gillen: The script’s arrival was old school: It came in a brown envelope. Four scripts, in fact. It had Queer as F*ck on the title and I thought, OK, that’s bold. I read it, or half-read it, but it was my ex-wife, Olivia, who read it properly and encouraged me to go back to it. On a second pass, I could really see the character clearly, how well-drawn the world and characters were. I also got the first inkling that this drama was really about Nathan, not Stuart or Vince, it was a story about a kid who was going to kick against the pr*cks. And that’s what really hooked me.

Queer as Folk auditions commenced almost immediately. Gillen says he left his audition convinced he was never going to get the part — but luckily producers were impressed by some of his previous accolades.

Shindler: We started the process as soon as we got a green light, and we auditioned. No one was offered a part without an audition. I think we cast Craig [as Vince] first, and from what I remember, we then cast [Aidan as] Stuart. Then we saw a lot of young kids, and we auditioned people a few times for Nathan before we got Charlie.

Gillen: I flew over to Manchester — I was living back in Dublin at the time, after 10 years in London — and read scenes at Granada [Studios], which [was] very real. The Coronation Street set was just there — beside the canteen. I did some bad acting, snogged a few fellas, and I think I might have been trying to sound like Robbie Williams or something. I left in the same way I left most auditions: in a cloud of shame. I dumped the scripts in a mailbox at the airport and went home. I later heard what got me the role wasn’t so much the audition (it usually isn’t) but the way I walked down the road in a film called Mojo. The whole film is on YouTube, and you can spot me around the nine-minute mark.

On The Cast & Crew

Shindler and Gillen have different memories from set, but both talk of a positive atmosphere among the crew. Gillen says he got off on the wrong foot with castmate Craig Kelly, but both of them were dedicated to making the show as good as it could be.

Shindler: [The cast members are] all different. But they were a great cast, they were really enthusiastic. ... They understood what we were trying to do and Russell’s humour. So it was positive. Very positive. I was producing then as well as executive producing. Which is not really possible, but I did it. So I was there every minute of every day and into the night with all of them. We were a really close team. I think we realised we were doing something that was going to stand out.

Gillen: Charles McDougall, the director of Episodes 1 to 4, was great, and we’ve remained close friends since. We shot a scene in Russell’s house, and that was the time I talked to [Russell] the most, if I remember right. Outside of that, you’re talking old-school Manchester and Granada crew, all of whom are great. From Robin the driver to Dave Oldroyd on camera, and the guy from catering who happened to be Mani’s brother from Stone Roses.

[I remember] early on, Craig Kelly and I had a kind of falling out. I mean, we were literally about to have a punch-up on Day 3. It was stupid really, all down to misinterpretation. My recollection is that, in a very early scene we were shooting, I think it was the aftermath of Phil’s funeral, I was leering at Craig but in character. The only way I could play a character like Stuart — who was so far away from what I was myself around then — was to really push into certain characteristics, and there was a selfish dark streak running through Stuart. So I was giving Craig a dirty look and he took offence.

In a later scene, I think it was the one where I was following Craig in the jeep while he was on foot, he mentioned afterward the tension created between us was a good thing.

I always thought Craig was great in it, for the record — the real anchor of the story. He did a fantastic job as Vince, and the project always comes first, so we got on with it.*

On Working With Russell T Davies

Shindler: He’s a monster! Terrible human being! [Laughs] I always have a great time working with Russell. He works so hard that it makes you work hard. And he pays so much attention to detail, so that’s what you have to do as well. So he makes you better, really. But it’s never not a laugh; it’s always funny. Even in the darkest moments when things are going terribly wrong, we did manage to find humour in them all.

Gillen: Russell writes in panoramic, so your job is to make the tiny bits of a huge picture work and fit together. Russell was around, but not all the time. Nicola, on the other hand, was there all the time. It was my first experience of a really creative producer being right by the camera always, and I liked it.

On Filming In Manchester

At the heart of the drama is Manchester’s thriving gay district. Filming on Canal Street may have proved difficult at times, but its presence in the series was key.

Shindler: The fact we didn’t have enough money, it was very difficult filming on Canal Street because we couldn’t close down the street. So we would get people shouting and things. But that was all part of the atmosphere. I think it all added to it. ... Having everyone come ’round and be suddenly so interested in the whole process was really a challenge but really good as well. Because you realised this filming meant a lot to [the LGBTQ+] community [on Canal Street].

Gillen: I remember a lot of freezing cold nights standing around in Manchester at 2 a.m. in a short-sleeved shirt trying not to look freezing cold. ... My idea of Manchester was formed around my love of Joy Division, New Order, and The Smiths, and it was exactly what I expected: cold, austere, and a time portal to the heights of the industrial revolution. ... [But] I fell in love with Manchester; that’s ongoing. From my first night in the Britannia hotel, sweating in a bed about what was going to happen the next day while people were going crazy in the room next door — there was a full-on party in there. So, I was sh*tting myself a little, but [I was] also a little crazy with anticipation for what I knew could be something brilliant, but only if we did it right, of course.

*Bustle reached out to a representative for Craig Kelly to ask for comment on Aidan Gillen’s memories from set but we did not hear back.