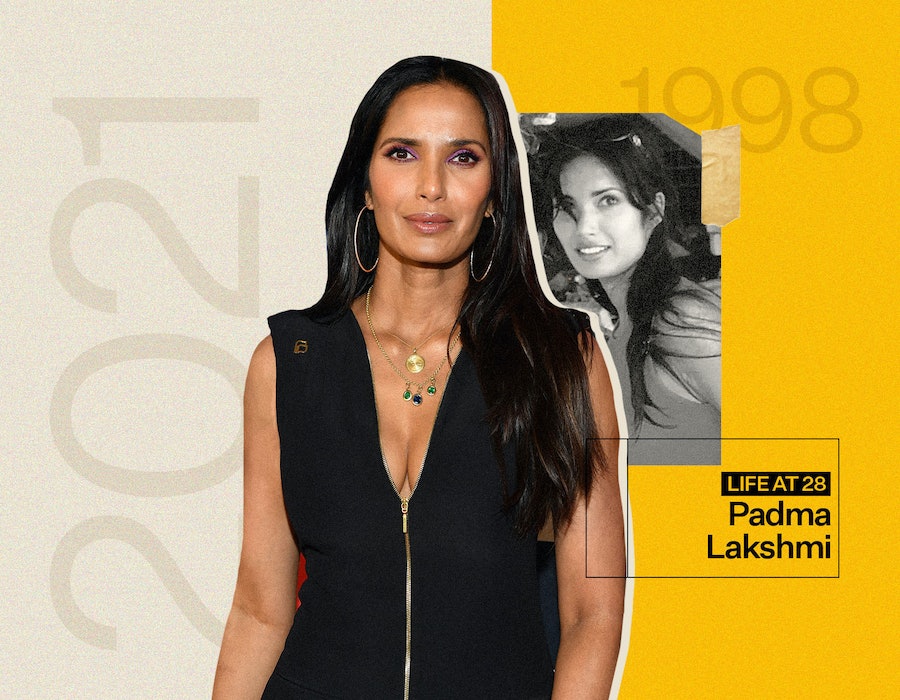 In Bustle’s Q&A series 28, successful women describe exactly what their lives looked like when they were 28 — what they wore, where they worked, what stressed them out, and what, if anything, they would do differently. For Top Chef’s Padma Lakshmi, it was the year her career in food started.

Twenty-eight was a pivotal age for Padma Lakshmi. She’d spent the past several years working as a model in Paris and Milan, acting in European TV miniseries, and co-hosting a Rome-based Sunday variety show, ​​Domenica In. But at 28, she bid her European tour goodbye and moved back to Los Angeles, where her mother lived and where she’d spent her preteen years. She hoped to find success stateside, but it didn’t feel predestined.

“It took me a lot longer than I thought it would to get an agent,” Lakshmi, who’s now 51, tells Bustle over the phone. “The media landscape was so white at that time.”

Soon after — and in another unexpected career pivot — Lakshmi found herself with a cookbook deal. “That was the year my food career started,” she says of age 28. “None of it would’ve been possible without that first book.”

The book, Easy Exotic: Low-Fat Recipes from Around the World, was her, ahem, entree to the industry; her book tour the first time she appeared on the Food Network. Since then, of course, she’s hosted 17 seasons of Bravo’s Emmy-winning Top Chef cooking competition, written two additional cookbooks plus a bestselling memoir, and debuted her Hulu show, Taste the Nation. In the latter show, which she conceptualized, hosts, and executive produces, each episode highlights the cuisine of an immigrant culture in America — Mexican burritos in El Paso, Peruvian ceviche in New Jersey, Chinese chop suey in San Francisco — weaving in the historical and sociopolitical forces that have shaped it. “Taste the Nation is a combination of the things I've always thought about,” says Lakshmi, who immigrated from India when she was 4, “but never thought about connecting as deeply as I do in the show.”

Last week, she premiered a special holiday edition — four new episodes, all streaming now — in which she celebrates Hanukkah with Jewish friends on New York City’s Lower East Side, Nochebuena with Cuban Americans in Miami, and Thanksgiving with members of the Wampanoag Native American tribe in Cape Cod. Along the way, she underscores the persecution, misrepresentation, and genocide the cultures have endured while eating crunchy latkes, slow-roasted pork, and hot quahog chowder.

On a day off from filming Season 19 of Top Chef in Houston, Lakshmi spoke to Bustle about that formative year of her life — and, of course, what she was eating.

“I had no idea that I was embarking on a lifelong career.”

I had just moved back to America after being in Europe for more than six years. Everything looked rosy [in Europe], but I knew that the road was limited because I was an Indian American girl in Italy, and I was always going to get ethnic parts. So I moved to L.A. I was going on auditions as an actor, I was modeling, and I was putting the finishing touches on Easy Exotic.

How did the cookbook deal come about?

I had done a movie where I had to gain weight. I had never really tried to diet, but after the movie finished, I was still making most of my living as a model, [so I had to lose weight]. I took calories and fat out of the recipes I was making to make them healthier. I met my publisher, [Harvey Weinstein], at a film event, and I think I got the deal only because of a marketing hook. Everyone wants to know what a model eats. No one actually thought the book would be any good. But after it came out, and I won an award at the [Gourmand] World Cookbook Awards, people started taking notice. There weren’t yet a lot of global, multi-cuisine cookbooks. And that was the way I ate, the way all the people I was around ate. I wanted to do a book that reflected that.

What was your go-to meal to cook for yourself at that time?

When I was home, it was a lot of beans. I would make a white bean stew with a lot of vegetables, like bell peppers and tomatoes and onions.

Tell me about how that experience was for you, learning how to cook on your own and for yourself in your 20s.

As a model, being able to go to places like Morocco, like Bali, like the Seychelles, like Sri Lanka, allowed me to try different foods in their native lands, cooked by native people. I got an understanding of world cuisine and how recipes are related. Every culture has rice dishes, every culture has dumpling dishes. You start to see patterns.

Did you have a picture in your head of what “making it” professionally would look like?

It was a steady income, having enough money in the bank so I didn't have to worry. As an actor, unless you’re really successful, you’re always a little bit worried: Is this role going to be my last? You’re always living on the edge of anxiety.

What advice do you have for 28-year-olds today?

Everything takes longer than you think it’s going to take. Twenty-eight is still really young. Take the time to be an expert at something. We all want to do a million things, but there’s merit in being really good at what you do, and leaning into that craft, and getting as much knowledge and experience as you can. [But also] give yourself as many opportunities to succeed as possible because you never know what’s going to come of it. I said yes to everything because I wanted to work. Even when I was lucky enough to get that cookbook deal, I just thought, “OK, this will be a fun project to do, and we’ll see where it goes.” I had no idea that I was embarking on a lifelong career.

More like this
Gabby & Rachel Reveal How That 'Bachelorette' Rose Ceremony Twist Happened
By Grace Wehniainen
Talking About Mental Health In Sport Is Crucial, Says England Legend Karen Carney
By Sam Ramsden
Tacos Are Chef Kay Kay’s True Love Language
By Maxine Harrison
How Director Quinn Shephard Turned Dylan O’Brien Into A “Viral Weed Blogger”
By Samantha Leach
Get Even More From Bustle — Sign Up For The Newsletter