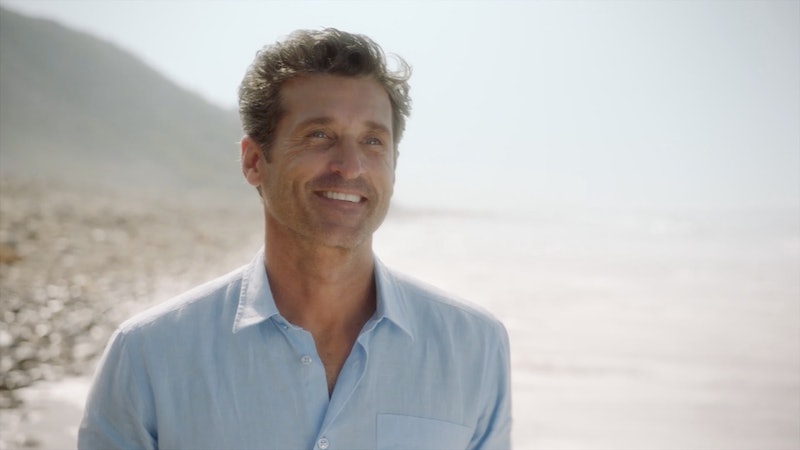 Derek and Meredith may have reunited in paradise on the Season 17 premiere of Grey's Anatomy, but back in the halls of Grey Sloan Memorial, it seems like the situation is pretty dire. While talking about his big return to the medical drama during a recent appearance on The Ellen DeGeneres Show, Patrick Dempsey confirmed Meredith's coronavirus diagnosis, teasing that McDreamy will be a kind of "angel" to help support Ellen Pompeo's character through her illness.

Dempsey, who left the show in 2015, revealed that the inspiration for his big return came about in July when he and Pompeo joined forces to encourage people to wear masks to prevent the spread of COVID-19. "We were playing catch-up, and she said 'What would you think of coming back to the show? Here's our idea of what we want to do for Season 17," the actor recalled. "I just thought ... how great it would be for the fans to see everyone reunited in this really bizarre way. And to the credit of the writers, Krista [Vernoff] came up with this great idea where I will come and visit her in her COVID dream."

While Vernoff, the Grey's showrunner, has avoided confirming whether or not Meredith has the coronavirus, Dempsey's comments do line up with what fans saw on the season premiere. In the final moments of the episode, the surgeon — who had been looking after COVID patients at the hospital — suddenly collapsed in the parking lot. And in a preview for the Nov. 19 episode, Meredith is seen wearing PPE and an oxygen mask, which led many fans to believe that she caught the virus while caring for sick patients.

Meredith's diagnosis wasn't the only thing Dempsey dished about, though. The actor also explained that McDreamy will "come back to visit" multiple times throughout this season, adding that he sees his character's return as a way to bring joy and peace to both Meredith and the fans watching at home. "The response [to Derek's return] has been incredibly overwhelming and very moving," Dempsey said. "It was nice to be able to have it work out this way. There are so many souls that we have lost right now so the idea of having angels around us is very comforting, at least to me."

Pompeo echoed those sentiments in a recent interview with Deadline, where she explained that she wanted the new season of Grey's Anatomy to bring some hope and joy to fans during these extremely uncertain times. "There's just so much darkness, and we knew that coming together would be a little ray of light," she said. "I think [Dempsey and I] had the same idea, at the core, to want to help people and bring a smile to people's faces."

"He loved the idea, and we were just so excited, and we had a ball filming it," Pompeo added later. "It was very healing to come back [to work], and know that we're doing something good, putting out a positive story, a healing story, going to make people smile, and I think, for me, I'm really grateful for the opportunity to be able to be at this place in the show where we can do this."

Both Pompeo and Dempsey have done quite a bit to advocate for public health amid the ongoing coronavirus pandemic. In July, Dempsey referenced one of Derek's most iconic lines when he encouraged fans to wear a mask on Instagram; while celebrating his big return on social media on Nov. 14, Pompeo used the moment to remind Grey's fans about the importance of PPE. "Let's love, let's heal, let's wear a mask..." she wrote, and hopefully fans everywhere will continue to follow the (TV) doctors' orders.

More like this
Shonda Rhimes' Net Worth Makes Her One Of The Wealthiest People In TV History
By Hugh McIntyre
'Grey's Anatomy's New Intern Got Advice From Dr. Bailey Herself
By Grace Wehniainen
A New 'And Just Like That' Table Read Pic Confirms A Key Character's Return
By Jack Irvin and Grace Wehniainen
Did 'Grey’s Anatomy' Just Drop A Major Taylor Swift Easter Egg?
By Grace Wehniainen
Get Even More From Bustle — Sign Up For The Newsletter