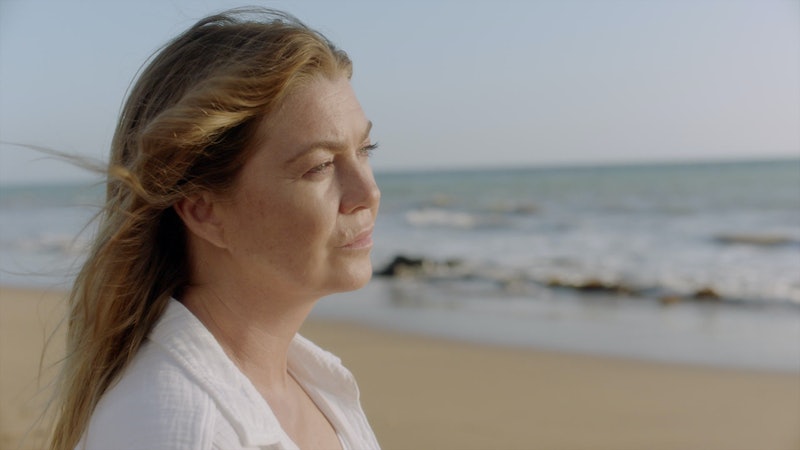 Spoilers ahead for the Grey's Anatomy Season 17 premiere. No, you're not McDreaming: Patrick Dempsey really did return as Dr. Derek Shepherd in the Grey's Anatomy Season 17 premiere. After McWidow discovered Meredith passed out in the Grey Sloan parking lot, ABC gifted fans the ultimate twist, reuniting the famed surgeon with her late husband on a beach somewhere deep in her subconscious. Not to worry: Meredith isn't actually dead, just dreaming, and fans will learn more in Episode 2 about what exactly is going on with her.

Though the remaining seconds of the premiere left only enough time for a stunned Meredith to respond to Derek's call by uttering his first name (while clutching her chest, like the rest of us), the preview for the second episode shows a tiny bit more of their exchange. "I miss you," she tells him, before Derek responds, "I know."

In an episode that saw the doctors of Grey Sloan combatting the coronavirus pandemic, losing an increasing number of patients, and dealing with a lack of PPE, Derek's return was meant to "bring joy, and escape, and fan candy" showrunner Krista Vernoff explained to Deadline. After approaching Ellen Pompeo (Meredith) about the prospect of bringing back a dead character for her to dream about, it was the Pompeo's idea to make Dempsey that person.

"There's just so much darkness, and we knew that coming together would be a little ray of light," Pompeo told Deadline. "And so, I think we had the same idea, at the core, to want to help people and bring a smile to people's faces. So, he loved the idea, and we were just so excited, and we had a ball filming it."

Vernoff also teased that viewers will see more of Derek outside of the initial beach scene — and Dempsey is game to appear in more episodes, too. "I really love the message of what the dynamic is in this story," he said. "I think it can be really helpful and healing to so many people."

More like this
A New 'And Just Like That' Table Read Pic Confirms A Key Character's Return
By Jack Irvin and Grace Wehniainen
Netflix Reveals First Look At Wednesday In The 'Addams Family' Spinoff Series
By Bustle Editors
Did 'Grey’s Anatomy' Just Drop A Major Taylor Swift Easter Egg?
By Grace Wehniainen
A New Scooby-Doo Movie Confirmed Velma Is Gay & Twitter Is Pumped
By Radhika Menon
Get Even More From Bustle — Sign Up For The Newsletter