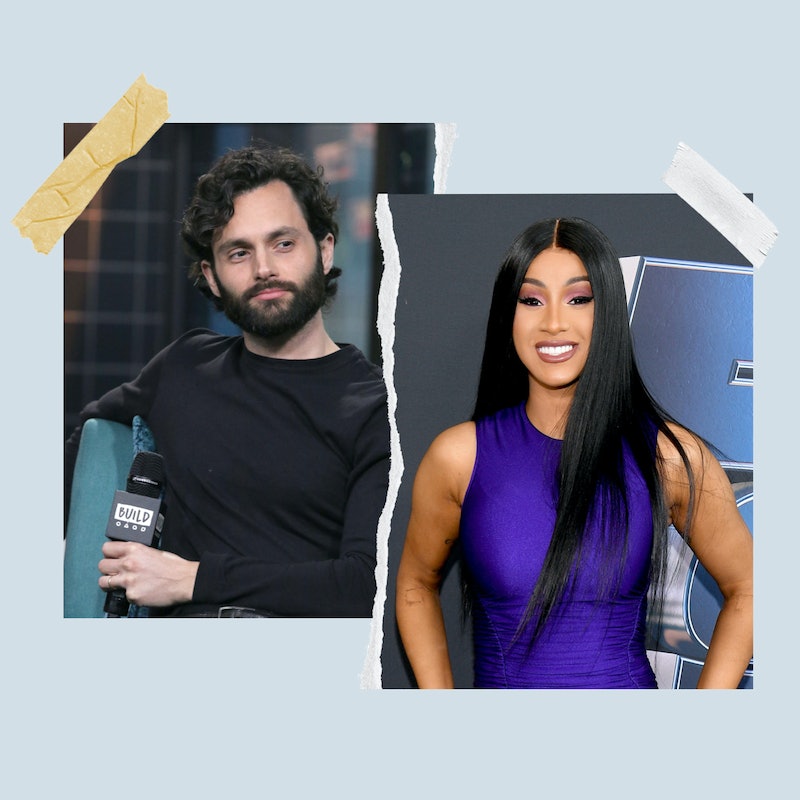 Will Penn Badgley and Cardi B make the switch from internet friends to co-stars? The YOU star isn’t so sure. Roughly one week after the Gossip Girl alum and the rapper fangirled over each other on Twitter, late-night host Jimmy Kimmel asked the actor about Season 4 of the hit Netflix series and whether or not the “WAP” artist will make an appearance.

The duo’s unlikely friendship began on Sunday, October 17, when the rapper saw an old interview of Badgley praising her for her authentic social media presence. “I actually really appreciate people who have this sort of second nature relationship to [social media],” Badgley said in the clip. “I feel like she has an incredibly authentic relationship to that, and that’s why people like her so much.”

The nearly two-minute-long video was first brought to Cardi’s attention by one of her followers, and after watching the clip for herself, she couldn’t hold back her excitement. “OOOOMMFFFGGGGGG HE KNOWS ME!!!” she tweeted. “OMMMGGGG!!!!!! Yoooo like I’m famous famous.” Badgley was totally speechless.

Things only escalated from there, and shortly after their back-and-forth on social media, the rapper and the YOU star swapped out their profile pictures for photos of each other. Then, the official Netflix account tried to get in on the fun. “Petition to get Cardi B to guest star in Season 4 of YOU,” the streaming service wrote in their Twitter bio.

Cardi clearly isn’t opposed to guest-starring; she even has some ideas about how to kick off her storyline. “So it’s episode 1 and I’m at Paris Fashion Week shutting it down!” she wrote. “I turn around and there stands YOU. Ok finish it off @Netflix.” Her followers were into it. “I’m here for this!!!!!!!” one fan wrote. Someone else joked that Badgley’s character would lock Offset in his glass cage.

Unfortunately, fans may be getting a bit ahead of themselves. When Kimmel asked Badgley if Cardi would be on the show, he didn’t have a clear answer. “Well, I don’t know,” the 34-year-old actor said, adding that even if he did, he “definitely can’t say.” But Kimmel isn’t the only one wondering. Apparently, fans have been petitioning to make this happen. “There is actually — I believe this is true — there’s an actual change.org petition,” he said. Well, where do we sign?

More like this
Here’s Everything Coming To & Leaving Netflix In October
By Jake Viswanath
Shaina Explains Why Natalie’s 'Love Is Blind' Text Claims About Shayne Have “No Validity”
By Grace Wehniainen
The ‘Emily In Paris’ Season 3 Release Date Is Here, Plus The First Footage
By Bustle Staff
How To Apply For 'Survivor' & Tips On How To Get Cast
By Meg Walters
Get Even More From Bustle — Sign Up For The Newsletter