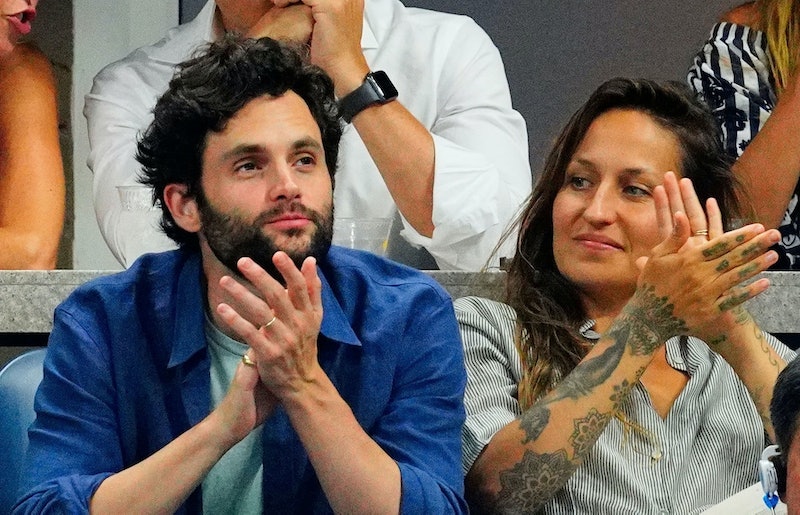 Penn Badgley and his infamous YOU character, Joe Goldberg, now have something in common: they’re both married men — and fathers. On the third season of Netflix’s controversial drama, our favorite stalker and serial murderer gets hitched to Love Quinn, the apple of his eye in Season 2 who is later revealed to have a murder streak and obsessive tendencies of her own. They’ve moved to the California suburbs to raise their newborn son, who’s in for a wild ride considering how quickly the couple revert back to their old habits. In real life, however, Badgley’s relationship isn’t toxic.

Badgley met his wife, Domino Kirke, a singer and doula to A-listers like Amy Schumer, in 2014. They got married nearly three years later in February 2017, and after another three years, the couple took the next step by welcoming their first child together in August 2020. Prior to getting hitched, Badgley had his fair of high-profile relationships, dating his Gossip Girl co-star Blake Lively and fellow actor Zoë Kravitz over the years. As for Kirke, she has an 11-year-old son, Cassius, with ex-boyfriend Morgan O’Kane.

After nearly seven years together, Badgley and Kirke’s relationship timeline proves that they’re living happily ever after, though they tend to keep their relationship and family life fairly private.

Badgley started dating Kirke sometime in 2014, PEOPLE reported. But as she told Hey Mama in 2018, they actually weren’t all that serious at first, as she was primarily concerned with raising her son. “I was sort of getting used to being a single mom, maybe a little too used to it,” she explained. “I had a really good thing with my kid and we were like this little team. Penn and I were dating, but it wasn’t nearly as serious as it is now, of course. I didn’t think marriage was in the cards for us. So I was sort of just chugging along, surviving, and getting through the days, and I think the difference now is that I’m really living.”

2015: They Watch Gossip Girl Together

As Badgley told his Gossip Girl co-star Chase Crawford in an “Actors on Actors” interview for Variety, the last time he watched his breakout show was with Kirke — and that may happen again in the near future. “It would be very interesting to watch it now,” he admitted. “I watched with my wife, with Domino, before we got married. It must’ve been six months after we met. She had never seen it, and that’s the last time I can remember seeing an episode.” Fans are still waiting to hear what she really thought of her future husband being Gossip Girl.

February 2017: They Get Married

Not only did Badgley and Kirke tie the knot in 2017, they got married twice. The couple first said “I do” in an intimate Brooklyn courthouse ceremony in February, with only close family and friends in attendance, including Kirke’s famous sisters Jemima and Lola. A few months later, the couple held a much larger ceremony and reception in Upstate New York, attended by celebrity friends like Debra Messing, Zac Posen, Heidi Klum, and Mariska Hargitay.

Initially, the couple refrained from commenting on their marriage online. But after their second ceremony, Kirke confirmed their union on Instagram by making a dad joke about their duel weddings. “You only get married twice, once,” Kirke wrote in a since-deleted Instagram post, as per The Cut.

September 2018: Penn Gushes About Her

A year after they tied the knot, Badgley opened up about his relationship to PEOPLE, describing his connection with Kirke as “divine love,” which is an aspect of the Baha’i faith that he has studied. “I don’t think I could truly value human love until I developed divine love,” he said. “[Domino and I] very much had a romantic beginning, and I think that you discover in marriage that what sustains a marriage for decades — there are less and less people who can tell us this — but I think it has something to do with [divine] love.”

In a rare interview about their family life, Kirke opened up about Badgley taking on a fatherly role in her son’s life, calling him a “really great stepdad” to now 12-year-old Cassius. “He doesn’t have to be ‘dad’ so he can have more fun with him,” she explained to Us Weekly in October 2019. “It’s really nice. The stepparent thing is definitely uncharted territory for me ’cause I didn’t grow up with one, but … he takes care of him really well.”

On Dec. 10, 2019, Badgley took to Instagram to pay tribute to Kirke on her birthday. Sharing a couples’ portrait and a video of his wife laughing as snow falls in their neighborhood, the actor wrote a “super-brief review” of Kirke’s “invisible qualities” that made him fall in love with her. “A truly radiant soul, you seem to spark alight almost everyone you meet, like a 99% success rate. It’s really impressive, and quite mysterious,” he wrote. “You encourage others to be honest, and brave, and gentle, and expansive. Your great capacity for empathy is obvious, something anyone can get warm by like a glowing stove.”

Badgley also nodded to Kirke’s day job helping out other expectant parents. “Your desire to be of service to others is miraculous. It is in your DNA,” he wrote. “For me, it is a joy to witness you when you are happy. For you, I always hope to be a source of joy. I’m really glad we’re married.”

Kirke announced that she and Badgley were expecting their first child on Feb. 10, 2020, on Instagram, sharing a celebratory photo of her baby bump. In the since-deleted post, she also revealed that the couple had experienced two miscarriages in a row prior to that pregnancy, which was especially difficult to navigate as a doula for other expectant mothers.

“I stopped trusting my body and started to accept the fact that I was done,” she wrote. “As a birth attendant, I’ve seen and heard it all. It takes everything I’ve got to detach lovingly from the losses I’ve been present for and be in my own experience.” She ended her touching note by addressing her new addition directly. “You’re already teaching us how to stay in the day in a way we’ve never had to, little one,” she wrote. “Thank you.”

On Sept. 20, Kirke announced that she and Badgley had welcomed their first child — more than a month after she actually gave birth. The singer took to Instagram to share a photo of her placenta on a piece of paper. “His heart shaped home,” she wrote, adding the hashtag “#40dayspostpartum.” If the timeline is accurate, that means she and Badgley gave birth on Aug. 11, 2020.

A couple weeks later, on Oct. 5, Kirke shared the first baby photo (which has also since been deleted) on Instagram, posting a snapshot of her husband gazing into their son’s eyes. However, they still declined to reveal the baby’s name, leaving it a mystery to this day.