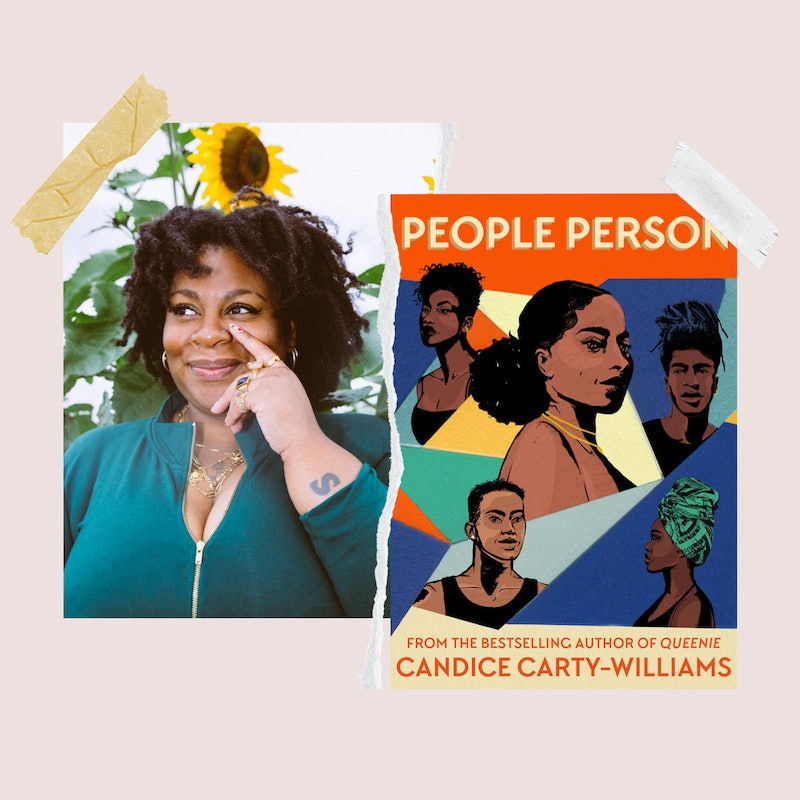 It’s hard to believe that Candice Carty-Williams’s much celebrated Quennie was published in 2019. In some ways, it feels like a lifetime ago – long before the concepts of “lockdown” and WFH ever entered our lives, let alone our lexicon. And in other ways it feels like it’s not even been five minutes. Either way, there’s no question about the joy that the author’s return, with People Person, brings.

People Person tells the tale of the Pennington siblings: Dimple, an aspiring influencer with terrible taste in men; and her four half siblings, Nikisha, Danny, Lizzie, and Prynce, who come to Dimple’s rescue when she finds herself in a rather tricky situation. Joined by little except a shared absent father (who cares more for his garish gold Jeep than his children or the four women he shares them with) the novel explores the importance of family, and its role in shaping identity and relationships.

In this excerpt, a stressed out Dimple and ever-chill Prynce, the youngest of Cyril’s children, are getting to know each other. Having been brought together by a dramatic event, they are waiting around while bossy older sister Nikisha decides what to do next. Standing in the garden, Dimple and Prynce discuss their future and aspirations, subtly illustrating the way in which the absence of their father has shaped their lives, aims, and perception of the wider world.

Surrounded by weeds that came up past their thighs, Dimple and Prynce stood close to each other, sharing the one solid block of concrete that had been placed arbitrarily in the garden.

‘So you do actually want to be’ – Prynce took a drag on his vape, a slim black thing that looked no different in size and shape to a tube of liquid eyeliner – ‘an influencer?’

Dimple shifted her weight from one foot to the other.

‘Well it wasn’t what it is now,’ Dimple told him.

Prynce passed her the vape, then looked up at the sky. His dark skin seemed to absorb the final offering of sun the winter afternoon gave them and hold it in there, glistening.

‘How you mean, “it wasn’t what it is now”? You must have more to say than that now you’ve got the numbers.’

‘I thought I’d like it more. All those people talking to me, all the time.’

‘But why did you think you’d like it at all? Why did you even want to be that?’ Prynce asked. ‘’Cause it’s not like it was an option at your school careers fair.’

‘Because I’m a people person,’ Dimple told him.

‘Are you?’ Prynce asked her. He wasn’t so sure. ‘Don’t you have to be an extrovert to be a people person? You aren’t very outward-facing. You see Dad? From what I remember, he’s a people person.’

There was a trace of admiration for their dad in Prynce’s voice that surprised and annoyed Dimple. When had Prynce last seen him?

‘It’s not just about that. And the whole thing is harder than you realise, so.’

‘Okay, okay,’ Prynce said, narrowing his eyes to think about it. ‘But, like, it’s not that hard to do, is it? Like, all you need to do is talk to a camera and get sent stuff.’

Dimple took a deeper pull as Prynce stepped away from her and waded into the weeds. He bent down and grabbed a handful, pulling them from the earth.

‘Yeah. I don’t follow you or anything, ’cause I don’t have social media, obviously. But look at when we helped you with that video – it’s not like what you do is hard.’

‘Why don’t you have social media? What’s wrong with it?’ Dimple asked Prynce. ‘You one of those people who think they’re on a higher plane because they don’t have Instagram?’

‘Nah. Not that. I just think it’s easy to get sucked in to a fake lifestyle,’ he said. ‘I know you know that none of it’s real, blah blah. But do your thing, init. Let other people validate you.’

‘Remind me what your job is?’ Dimple asked, folding her arms.

‘I’m not making a dig or anything, you know?’ Prynce said.

‘I’m just asking questions. It’s not that deep. You don’t need to be spiteful.’

‘Okay, well, I’m asking you a question,’ Dimple mimicked Prynce’s voice, so well that he jerked his head back, impressed.

Prynce bent over again. ‘I dunno what I want to do yet.’

‘Don’t you feel a bit like you’re feeding into people’s insecurities? Genuine question. And, like . . . aren’t you insecure yourself? You know what I mean?’

It was Dimple’s turn to jerk her head back, amazed that her brother could ask such pointed and rude questions as if he was asking her what the time was.

‘’Cause, like, I don’t see how you couldn’t be insecure,’ Prynce continued. ‘If I was, like, putting myself out there all day every day for people to watch me, I’d just be paranoid that people were always watching me. Where does it stop?’

People Person (published by Trapeze) is out now.

More like this
Everything To Know About The 'Daisy Jones & The Six' TV Series
By Maxine Harrison and Brad Witter
Your Guide To Watching 'Everything Everywhere All At Once' In The UK
By El Hunt and Sophie McEvoy
The Song At The End Of 'The Last Of Us' Ep 1 Has A Deeper Meaning
By Sophie McEvoy
Turns Out George Clooney Is A Huge Fan Of This Classic British Game Show
By El Hunt
Get The Very Best Of Bustle/UK
Sign up for Bustle UK's twice-weekly newsletter, featuring the latest must-watch TV, moving personal stories, and expert advice on the hottest viral buys.