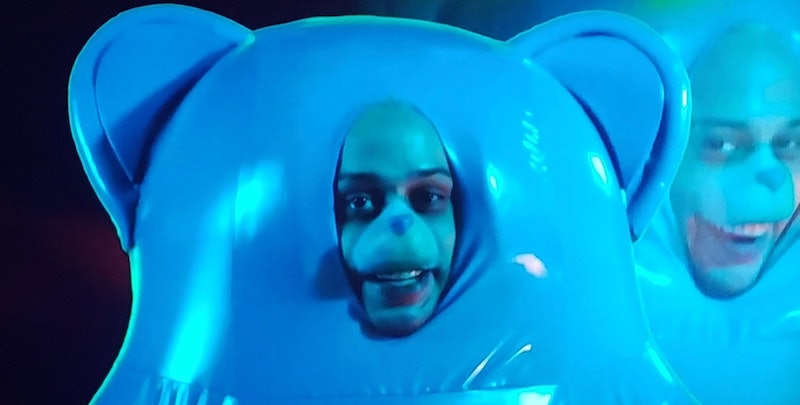 The skit opens with King's character, Williams the Negotiator, showing up to attempt to defuse a tense standoff situation. Before she gets started, though, she tells Bowen Yang's cop character, "Oh, by the way, I hope you don't mind, but I ate all those gummy bears you had in your car." When he looks confused, she adds, "Those neon-colored gummy bears. The ones that kind of smell bad. The ones you had hidden in the bag that said 'evidence.'"

This mistake, of course, leads to her having an amusingly psychedelic trip, hallucinating Davidson's gummy bear standing behind the men that Williams is trying to negotiate with. Wearing a giant plastic suit and sporting a perturbing prosthetic nose, the bear is, to be quite frank, nightmare fuel.

As Williams struggles to stay focused, the gummy bear sings, "I'm a weed gummy, yes, I'm a weed gummy! You should not have eaten me." He adds, "I'm going to tell your family. You're going to be high forever."

"I think I died," Williams tells Yang's character when he asks if she's OK. "I'm pretty sure. I'm definitely dead."

While some Twitter users found Davidson's suit terrifying, others pointed out that the song was ridiculously catchy.

The skit also featured Aidy Bryant, appearing as a second weed gummy, who nonsensically sings about "a race of volcano people" as an animation plays in the background. Melissa Villaseñor also had a cameo as Marge Simpson, who tells Williams that she's actually the devil, adding, "And you're my greatest creation!"

The skit ends with the kidnapper actually giving up. "You know what, this is all starting to freak me out, so you guys win," he says. Williams of course, ends up dancing around with all the characters she imagines before taking a giant nap on the top of the car.

Davidson's straight-faced gummy bear may be horrifying, but it's ultimately a fun skit that allowed King to play an unabashedly silly role — and it gave us a surprising new bop, too.