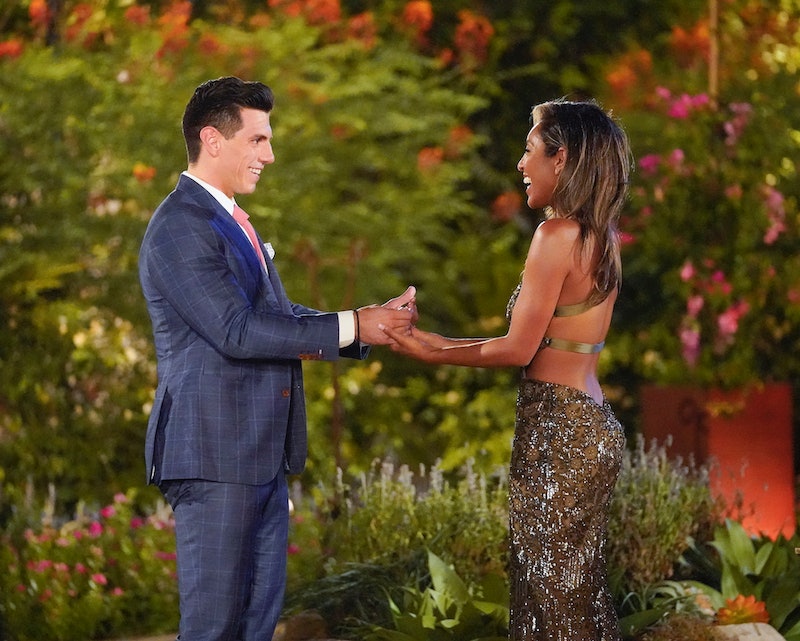 One of Tayshia Adams' new suitors has just tested positive for COVID-19. Bachelorette contestant Peter Giannikopoulos, who arrived at the La Quinta Resort & Club for the first time on the Nov. 10 episode of the show, revealed his diagnosis on Instagram — but the troubles do not end there. Peter got into a car crash shortly after getting diagnosed, and fortunately, he came out of the situation relatively unscathed.

"The past 24 hours have truly been some of the hardest in my life," the real estate advisor wrote. "Yesterday I tested positive for Covid and have begun two week quarantine. I am going through a lot of emotions at the moment with so many thoughts in my head as to how this happened." He added that while he had been following the proper protocols, the diagnosis has been a reminder that "no matter who we are or what we do, we are all vulnerable."

Peter then revealed that he lost consciousness behind the wheel due to anxiety surrounding his diagnosis, causing him to veer off the road and into a pole. "All I remember was waking up to people shouting for help, as I was in a deep daze and confusion," he wrote. "I didn't know where I was, how I got there, or what happened. Luckily I came out of it with only a small gash on my nose."

Citing the overwhelming anxiety that can come with battling the virus, Peter finished his caption by calling on people to come together during these uncertain times. "Although my symptoms are evident, I am going to fight this and win," he wrote. "I understand so many lives have been impacted and my heart goes out to every single person affected. It's okay to be nervous, anxious, and feeling uncertain, but just remember we are all in it together."

The diagnosis and subsequent accident certainly mark one of the more harrowing debuts in Bachelorette history — one that is fitting for what's so far been a turbulent season. Tayshia finally made her Bachelorette debut, and while many of the contestants were excited about the new start, some struggled with the switch. Jason Foster left the show due to his lingering feelings for Clare Crawley, ushering in four new suitors and brand new drama.

The Bachelorette airs on Tuesdays at 8 p.m. on ABC.