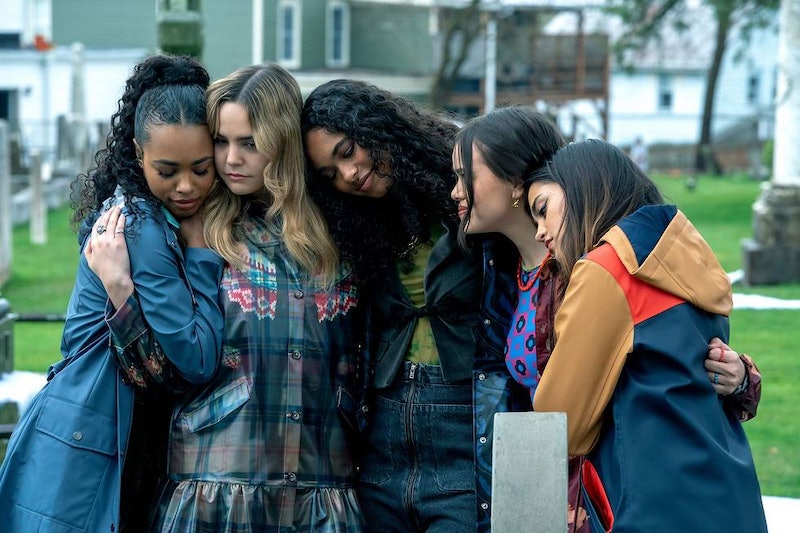 Major spoilers for Pretty Little Liars: Original Sin Season 1 ahead. Being a high schooler is tough, but few teenagers suffer more than those in the rogue suburbs of the Pretty Little Liars universe. That was the case for the latest group of Liars in the spinoff, Pretty Little Liars: Original Sin. Much like its predecessor, Original Sin revolved around another team of high school girls being terrorized via text message, courtesy of an unknown harasser using the alias “A.” It might seem very familiar until the spinoff unabashedly pays homage to horror movie lore, setting itself apart from the original series by creating more scares and mysteries. It all led to a happy-ending-turned-cliffhanger in the Aug. 18 finale, which leaves the door open for the newly announced Season 2.

The coming-of-age slasher was renewed by HBO Max on Sept. 7, and the streamer seems quite excited about its future. “We are so proud of the incredible response both critically and from fans that ‘Pretty Little Liars: Original Sin’ has received,” said Sarah Aubrey, head of original content at HBO Max, in a statement Wednesday. “Viewers have embraced our new generation of Liars, and Roberto and Lindsay’s brilliantly dark, horror-fueled take on this iconic franchise.” She went on to add that they’re “beyond excited” to continue telling stories with the liars, adding, “As Tabby would say, ‘There’s a sequel in the offing!’”

The finale reveals A’s identity as Archie, the twin brother of Angela, the victim of the Liars’ moms’ bullying. (For the complete breakdown on why Archie was set on revenge, read Bustle’s full Season 1 ending explainer.) After a violent confrontation, a pregnant Imogen takes down Archie, the man who killed her mother, before giving birth to her child. But the episode's final moments reveal the masked killer is not dead. After taking out two more victims — albeit the show’s other villains – Archie is free to continue his killing spree.

If one thing feels certain, Archie will only complicate the Liars’ ability to move on from his terror. Madison says Imogen is finally getting “a chance to heal,” and a second season could explore that part of her journey. “What does the aftermath of that look like when you put a face to the person who did that and when you have physically given birth to a child? You’re going to be carrying those feelings with you no matter where you go,” she explains. And now with the renewal, it seems like Madison and the team behind the show can continue telling those stories. Let’s break down what fans could expect in Season 2.

If you’ve seen the finale, you know some big names won’t be returning. For instance, Chip (Carson Rowland) got axed along with Sheriff Beasley (Eric Johnson) before the season's end. Principal Clanton (Robert Stanton) also ended the season behind bars for his plot to avenge his daughter by torturing the Liars and their mothers, so it remains to be seen if he’ll appear again. A, aka Archie, is still at large, so the knife-wielding behemoth will likely pop up in Season 2. But what about the Liars? Since they all survived, it’s a near certainty that Imogen (Bailee Madison), Tabby (Chandler Kinney), Faran (Zaria), Mouse (Malia Pyles), and Noa (Maia Reficco) will be back if Season 2 is renewed.

“Dynamic-wise, I’d love to see the Liars come and be together for a lot more,” Madison says. The actor not only would like to see the team investigating more mysteries but also just hanging out in the cafeteria or throwing movie references back and forth with Tabby. “That would be a big one for me, just getting to be with my girls a bit more,” she adds.

It’s hard to know when exactly Original Sin will be back on our screens. The first season took nine months to film, so now that Season 2 has got the green light, fans can assume it’ll take roughly a year for it to premiere. Late 2023 seems like a safe bet for Season 2, likely debuting in the summer or fall.

The Season 1 cliffhanger with Archie on the loose all but confirms that the Liars’ nightmare isn’t over. Despite Imogen’s hopeful message of hope that almost closed out the season, there’s still plenty of terror roaming the streets of Millwood.

As for where the series may go, Madison cited the Scream franchise as one of her inspirations, not only for her portrayal of Imogen but for the trajectory of the Liars’ story. “So many of these movies [like Scream] can exist, and it’s still done so well. It doesn’t get old,” she explains. “Neve Campbell is such a joy to watch. When Sidney comes back on screen, you’re like, ‘Something’s about to go down.’ It’s so entertaining and enjoyable.”

Much like Campbell’s Sidney cannot escape her past in Woodsboro, the traumas of Millwood would also follow the Liars. Season 1 borrows a lot from horror mythology and iconography, so it would make sense that the Liars, like Scream’s Sidney, would also become hardened by their tribulations. “It would be fun to experience these girls getting to grow, get stronger, face things, and not take bullshit from anybody,” Madison says. “In a horror world, that can exist and be done so beautifully. There are elements that we can continue to take and push the boundaries for.”

This post will be updated as more information about Pretty Little Liars: Original Sin Season 2 is available.

This article was originally published on Aug. 18, 2022