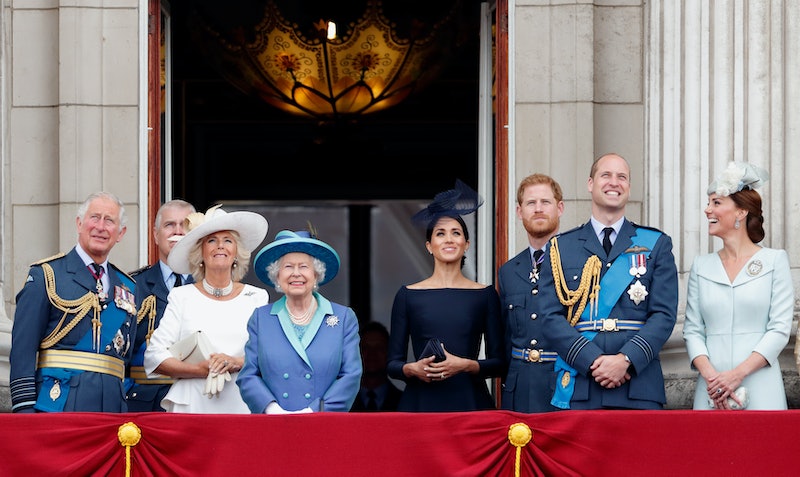 While Meghan Markle and Prince Harry are no longer staying silent about their time as working members of the royal family, Buckingham Palace certainly is. Harry’s father, Prince Charles, dodged a question about Meghan and Harry’s explosive interview with Oprah Winfrey on Tuesday, March 9, which is... what most viewers expected from most royals.

The Prince of Wales was leaving a pop-up COVID-19 vaccine clinic in London when a photographer asked him, “Sir, what did you think of the interview?” According to royal reporter Matt Wilkinson, Charles was seen “nervously chuckling” and simply ignored the question as he walked out the door. Charles’ clinic visit, meant to combat vaccine hesitancy among the British public, marked the first official royal engagement since Meghan and Harry’s interview aired on March 7. Evidently, he has no comment... yet.

The royal family has yet to respond to the interview or the accusations made against them, like the Meghan and Harry’s claim that a family member had “several conversations” with concerns about how dark their son Archie’s skin would be prior to his birth. However, the BBC reports that the Palace has had “crisis talks” since it aired, and many outlets and royal experts expect a response within the week.

Speaking to Winfrey, Prince Harry went into detail about his relationship with his father, saying Charles “stopped taking [his] calls” when he was attempting to negotiate his royal exit. “By that point, I took matters into my own hands,” he said. “It was like, I need to do this for my family. This is not a surprise to anybody. It's really sad that it's gotten to this point, but I've got to do something for my own mental health, my wife's, and for Archie's, as well, because I could see where this was headed.”

He went on to explain how he could see parallels between Meghan’s mental health and his late mother Diana, who was relentlessly targeted by tabloids during her marriage and divorce from Charles before her untimely 1997 death at the hands of paparazzi. While Harry clarified that Charles now takes his calls, their relationship remains damaged, as he feels his father wasn’t there for him for guidance. “There's a lot to work through there, you know?” he said. “I feel really let down, because he's been through something similar.”