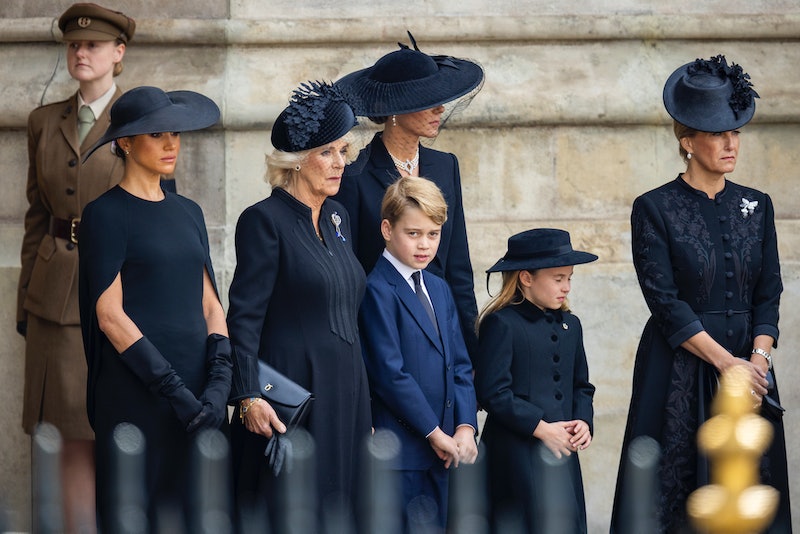 Queen Elizabeth II’s funeral is the grandest state funeral in living memory, but a particularly poignant time for the royal family, especially the youngest royals. Nine-year-old Prince George was seen being comforted by his great aunt, Sophie, the Duchess of Wessex, at the Queen’s state funeral on Sept. 19. As the royal family was leaving the funeral service at Westminster Abbey, the Queen’s daughter-in-law was seen putting her arm around the young prince in a sweet gesture.

Prince George attended the funeral with his seven-year-old sister Princess Charlotte, arriving with Camilla, Queen Consort and their mother, Catherine, the Princess of Wales. The prince and princess also walked in the funeral procession, escorted by their parents, and followed by their uncle, Prince Harry, and aunt Meghan Markle, the Duke and Duchess of Sussex. Prince George is now second in line to the British throne, following his father.

During the hour-long funeral service, Sophie also lent a comforting hand to her husband, Prince Edward, the Queen’s youngest son, by handing him a handkerchief during an emotional moment. Her Majesty The Queen passed away on Sept. 8, surrounded by members of the Royal Family.

Sophie was known to be quite close to Queen Elizabeth II, even referring to her as “Mama” in an October 2019 speech honoring the work of her mother-in-law’s Diamond Jubilee Trust. “They genuinely liked one another, and they spent a lot of time together,” royal expert Jennie Bond told Good Housekeeping. “They seemed to very much enjoy one another’s company. I think it was very much a two-way relationship. It wasn’t just about an adoration of the queen by Sophie; it was a mutual friendship.”

Edward and Sophie paid tribute to the matriarch in a Sept. 16 statement, sharing memories of his “beloved mama” with their 18-year-old daughter Louise and 14-year-old son James. “The Queen's passing has left an unimaginable void in all our lives,” they said. “Sophie and I have taken huge pleasure in seeing our James and Louise enjoying the places and activities that their grandparents loved so much. Given that my mama let us spend so much time with her, I think she also rather enjoyed watching those passions blossom. Those times together, those happy memories, have now become massively precious to each and every one of us.”