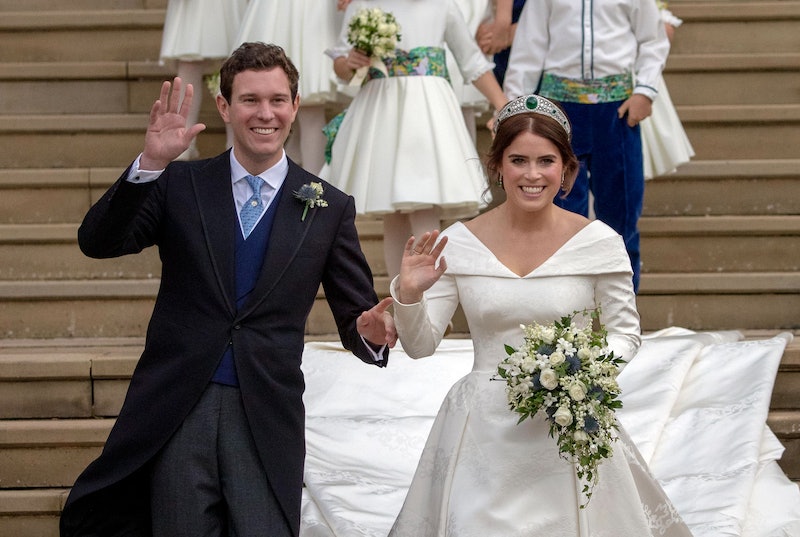 From one growing royal family to another! Following the Duke and Duchess of Sussex's move to Los Angeles, Princess Eugenie has moved into Frogmore Cottage, Meghan and Harry's home in Windsor, as she and husband Jack Brooksbank prepare to welcome their first child together. The house "is a private residence of the Duke and Duchess of Sussex and any arrangements is a matter for them," a Buckingham Palace spokesperson told People of the big move.

A source close to the U.S.-based royals told the outlet that they are "happy" to have Harry's cousins live there ahead of the birth of their child. "Frogmore Cottage continues to be the Duke and Duchess of Sussex’s residence in the U.K.," says the source, "and they are delighted to be able to open up their home to Princess Eugenie and Jack as they start their own family."

The Sun first broke the news about Frogmore's new residents on Nov. 20, when a source told the UK-based outlet that moving vans had been spotted outside the cottage in the middle of the night. "Emptying their home and handing over the keys is a pretty strong sign Harry and Meghan have no plans to return," the source continued. "It appears they are tying up loose ends as they plan to extend their stay in the U.S. perhaps permanently."

In the years since Eugenie and Jack got married in October 2018, the pair have been living in Ivy Cottage on the grounds of London’s Kensington Palace; however, according to People, they have spent quite a bit of time in Windsor during the ongoing coronavirus pandemic. It makes sense that the couple would decide to move back to the town where they got married before their first child's birth, as Eugenie's parents, Prince Andrew and Sarah Ferguson, live at the Royal Lodge in Windsor Great Park, while her grandparents reside at Windsor Castle.

The princess announced that she and Jack are expecting their first child on Sept. 27, by sharing a photo holding a tiny pair of teddy bear slippers on Instagram. "Jack and I are so excited for early 2021...." Eugenie captioned the post, which also included a beaming photo of the parents-to-be. The big news was confirmed by the official royal family Twitter account on the same day. "Her Royal Highness Princess Eugenie and Mr Jack Brooksbank are very pleased to announce that they are expecting a baby in early 2021," the announcement read. "The Duke of York and Sarah, Duchess of York, Mr and Mrs George Brooksbank, The Queen and The Duke of Edinburgh are delighted with the news."

The following month, Eugenie celebrated her two-year wedding anniversary with a touching tribute to her husband on Instagram. "Been the best 2 years married to you and 10 years with you in total .. happy memories always my dear Jack," she wrote, alongside a montage of photos from the course of their relationship, set to London Grammar's "Baby It's You."

Meghan and Harry's time in Frogmore Cottage was fairly short. After extensively renovating the residence, they moved in ahead of the birth of their son, Archie Harrison, in April 2019. Less than a year later, in January 2020, they announced their decision to become "financially independent" and began settling in North America, first in British Columbia, Canada, and then in California. By September, a spokesperson for the Duke and Duchess of Sussex said that Harry "fully covered" the renovation costs, which were said to be around $3 million. (The costs were originally paid by the Sovereign Grant, the U.K. fund set aside for royals that is fueled by taxpayers, which caused controversy when they stepped back as senior royals.)

"A contribution has been made to the Sovereign Grant by the Duke of Sussex," the statement said. "This contribution as originally offered by Prince Harry has fully covered the necessary renovation costs of Frogmore Cottage, a property of Her Majesty The Queen, and will remain the U.K. residence of the Duke and his family."

And now, it will also be the residence of Princess Eugenie and her growing family.

More like this
The Difference Between The Royal "Institution" & "The Firm" Shows Who's Really In Charge
By Savannah Walsh and Meguire Hennes
Why Was Sandra Oh At The Queen's Funeral? She Represented Order Of Canada
By Radhika Menon
Prince George & Sophie Wessex Shared A Tender Moment At The Queen’s Funeral
By Jake Viswanath
8 Photos Of Prince George & Princess Charlotte At Queen Elizabeth II's Funeral
By Jake Viswanath
Get Even More From Bustle — Sign Up For The Newsletter