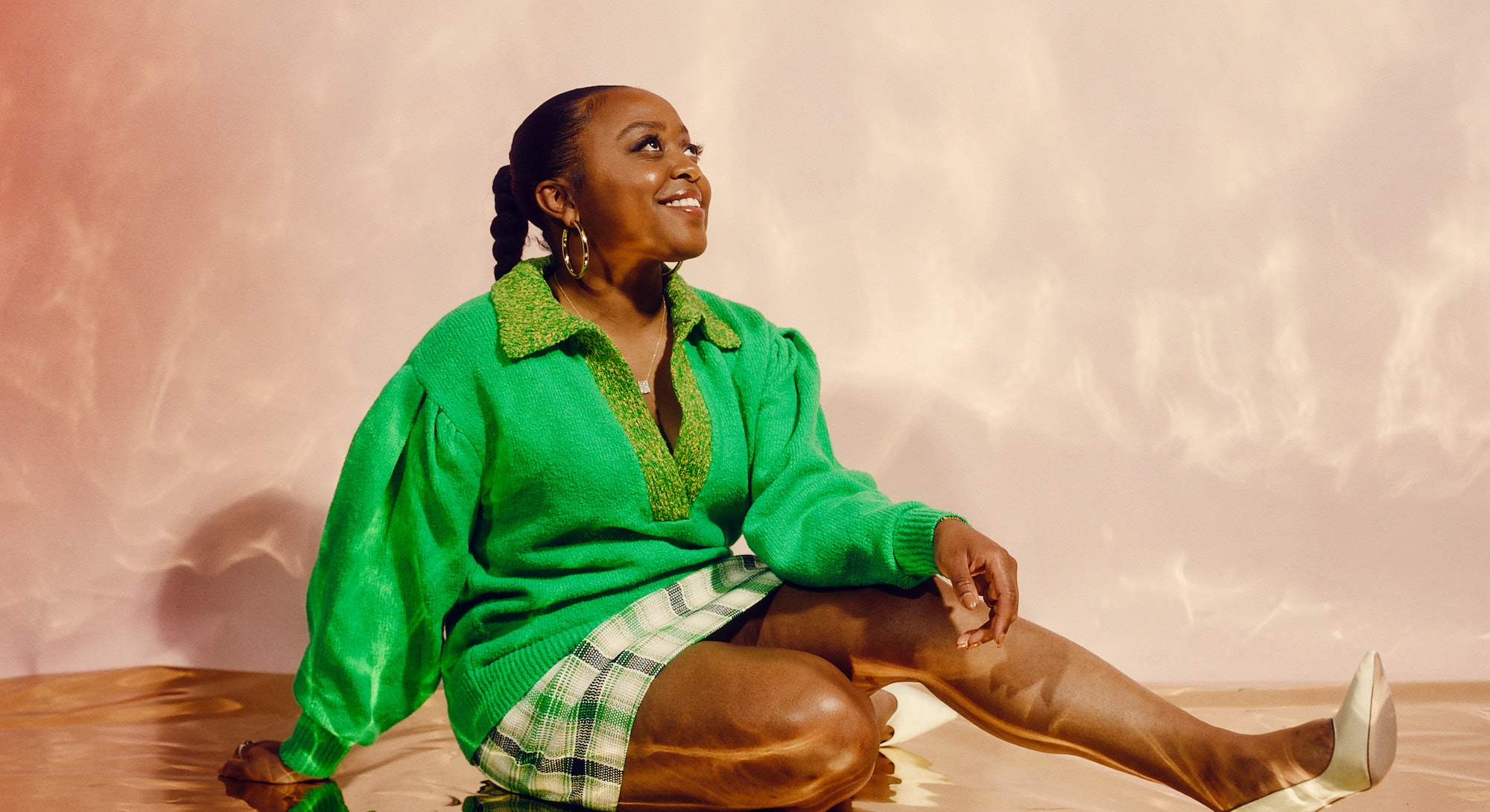 Getting an at-home mani-pedi in your sun-drenched Los Angeles home — just days after a slew of photo shoots, late-night TV appearances, and dinner with Kid Cudi in New York — is not the picture of relatability. But when I first connect with Quinta Brunson over Zoom and glean that exact scenario, her affability is what I notice most. She’s wearing a simple black T-shirt emblazoned with #BuiltPhenomenally — a hashtag created in support of a Ford campaign voiced by Angela Bassett — and her face is makeup-free. In the three months leading up to our conversation, Brunson’s show Abbott Elementary has become a feverishly viewed and critically acclaimed ABC sitcom amid Hollywood’s current wave of marathonable, hours-long dramas and docuseries — a rare feat that stands to propel her to a higher echelon of fame. But she’s taking this Zoom from her phone, which keeps toppling over to reveal the ceiling’s exposed wood beams.

Brunson is still wrapping her head around the show’s success, describing the Abbott-related attention she received recently at a wedding with amusement. “The amount of women who came and grabbed my cheeks … and they’re like, ‘I love Barbara and Ava, and we need you to leave Tariq!’” Brunson says. “They’re so invested.”

She may be marveling at the reception to her show, which has already been renewed for Season 2, but the 32-year-old creator, writer, and actor has long been confident in her own ambition. “I believed that I would have my own show one day,” Brunson says. “That was my dream.” Before Abbott Elementary, she’d gotten tantalizingly close to realizing that dream: She had developed and sold pilots, fronted a Facebook video series, and played roles in shows like Big Mouth and A Black Lady Sketch Show. Abbott just happened to be the breakthrough. “The timing of Abbott came at the right place for where I was in my career,” she says. “It all kind of lined up.”

Growing up in Philadelphia, Brunson was a student of sitcoms. The Jeffersons, 227, and The Fresh Prince of Bel-Air were household favorites that she watched with her parents and four siblings. Her tastes were varied; she was a fan of The Andy Griffith Show, even though it’s “old as dirt,” and still feels strongly that a certain Nickelodeon show was slept on. “iCarly came on TV the other day and I was like, ‘Man, that was a good sitcom, right?’ It doesn’t get enough credit because it was a Nickelodeon show, but it actually is such a well-written sitcom.”

Though Brunson knew early on that she wanted to write and perform comedy, for years she “found it to be unrealistic,” partly because aside from Wanda Sykes, there weren’t many people who looked like her being funny on TV. Will Ferrell and Tina Fey were entertaining, but not the most relatable performers to a Black girl from Philly. Plus, her parents wanted her to have a “standard, good old-fashioned career,” so she shelved her comedic aspirations to study advertising and broadcast telecommunications at Temple University. It didn’t last long: She soon started traveling to Chicago while in college to take classes at the renowned improv and sketch theater Second City. Eventually, much to her parents’ disapproval, she left school and moved to LA.

By the time she was living on the West Coast, Brunson had fewer doubts that her TV aspirations would come to fruition. But it was the first time she wondered if her 4-foot-11-inch height — something she’d previously considered to be cute and funny in her comedy — would pose a challenge in Hollywood. “When I got to LA and I started really thinking about whether or not I could be an actress, I was like, ‘Oh, dang, nobody is 4’11”... We may have encountered a problem we didn’t think about here,’” Brunson says. She Googled actors she presumed to be her height like Nia Long and Lady Gaga, but learned that they were all taller than her except Kristin Chenoweth, who also stands at 4-feet, 11 inches. The discovery was promising. “I was like, ‘All right, it has been done before, it can be done again!’”

Between a job at the Apple store fixing iPhones and occasional fashion assistant work with stylist Yashua Simmons and then-fashion director at Elle Samira Nasr, Brunson was making comedic videos for Instagram and YouTube, memorably introducing the world to The Girl Who Has Never Been on a Nice Date — a character enshrined in internet-meme history for the phrase “Ooo, he got money.” A following emerged around Brunson’s first brush with virality, but financial gain didn’t — at least not immediately. “This was before you could make money off of Instagram,” Brunson explains.

When her friend Justin Tan, then a staffer at BuzzFeed, asked her to appear in a video for the burgeoning website — and, most importantly to Brunson, told her she'd be paid $250 — her answer was an immediate yes. The video, in which she tastes several flavors of Doritos, led to a few months of freelance work, after which Brunson expressed interest in joining BuzzFeed full time. “They were kind of like, ‘Are you sure? You have your own presence.’ And I was like, ‘Yeah, but I’m broke; that presence stuff doesn’t matter.’” In her full-time role, she began making videos “more specific to the Black experience and then my own experiences,” she says.

Since leaving BuzzFeed in 2018, Brunson has continued to draw from her lived experiences when writing, producing, and acting. Abbott Elementary is inspired by her mother — a retired kindergarten teacher — set in an underfunded school in Philly, and named after one of Brunson’s former teachers. “There’s wish fulfillment television, and then there’s realistic television,” she says. “When you’re watching The Batman, both Zoë Kravitz and Twilight look like someone you don’t know, and that’s what’s exciting about the movie,” she says, nicknaming The Batman star Robert Pattinson after his most (in)famous project. “But something like this, I wanted the people to feel familiar.”

Tyler James Williams, who plays substitute teacher Gregory, “looks like someone you know from school or your neighborhood,” while almost everyone has had a teacher like Barbara, a warm but stern motherly figure embodied by legendary stage and screen actor Sheryl Lee Ralph. As a former Teach For America teacher, I recognized the world instantly: I worked with questionably qualified administrators like Ava (Janelle James) and no-nonsense teachers like Melissa (Lisa Ann Walter), and my corps was largely composed of Jacobs (Chris Perfetti) and Janines (Brunson) — naive and idealistic but extremely dedicated and well-intentioned.

The success of Abbott was immediate, with ratings quadrupling after the premiere — a first for ABC. Such a strong showing for a freshman comedy is unprecedented, but Brunson has been working toward network television success for years. “There were shows I sold before Abbott that didn’t go to air,” she says. “I could think of them as rejections, but then when you get to make a show like Abbott, you look at them as blessings.”

With the show renewed for a second season, Brunson and her team are met with the challenge of maintaining its luster. “I know Abbott feels very well formed to people, and it is, but that takes constant work to make sure that our voice is consistent. [And] it’s not just talent... it’s a business. There’s so much involved that isn’t just being funny.” Business does have a cutoff time, though, and unlike the teachers at Abbott, Brunson doesn’t take her work home with her. “I really try to be done with all work at 6,” she says. “If I can be done by 5, I prefer that. I want to have adequate time to spend at home with my partner, with my family, with friends.”

As Abbott’s profile has risen rapidly, so has Brunson’s. She’ll have to get used to the rabid interest in her work. Before we end our second conversation, she tells me that at a recent party, a handful of young actors were milling around long after they’d introduced themselves to her; it took Brunson a moment to realize that they were fans of her work who wanted to keep the conversation going. I tell her that a few days prior, I was on the subway next to a woman who had torn Brunson’s Time interview out of the magazine and was reading the single sheet.

“The woman tore out the page?” she asks, her eyes widening in disbelief. “I don’t even know what to say about those kinds of things. I’m still quite speechless.”