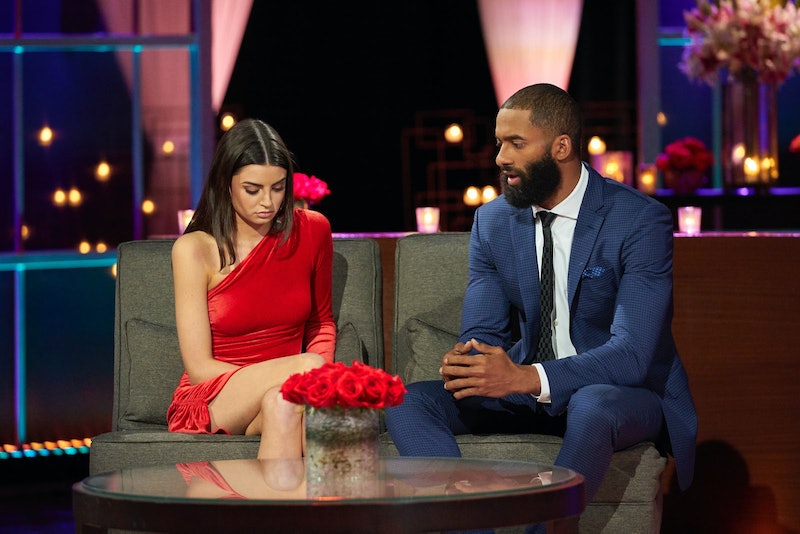 Rachael Kirkconnell is not here for people hating on Matt James. Following their split, which was addressed heavily on this week’s After the Final Rose special, Bachelor Nation had mixed feelings about how Matt should’ve handled Rachael’s past racist behavior. But while many viewers understood the reality star’s decision to part ways with the 24-year-old, there were some fans of the show who hurled racist abuse his way simply for breaking up with her.

“I am taken aback by what I’ve seen tonight,” Rachael wrote on her Instagram stories on Wednesday, March 17. “If you think that attacking a person I care about with racist insults is what I would ever want, you haven’t been listening. Some of the things I’ve seen being said to and about Matt are repulsive. I respect the decisions that Matt has had to make during this experience. If you are directing hate towards him, please stop. Recognize someone’s humanity and think about the impact your words have.”

During the special, Matt revealed that he called things off with Rachael in February after photos surfaced of her at an antebellum plantation-themed party in 2018. Rachael addressed the photos directly when prompted by host Emmanuel Acho, explaining that she “didn’t think about” the pictures or her ignorance. “At that point, it was just me taking some photos with my friends and I didn’t think anything of it,” she said. “I didn’t think of the trauma that it would cause.”

Anyone who tuned into ATFR could tell that Matt was extremely hurt by the images. “The most disappointing thing was having to explain to you why what I saw was problematic and why I was so upset,” he said of the role the photos played in their breakup. “When I’m dating someone, [I’m] on track to get married. And so when I questioned our relationship, it was in the context of you not fully understanding my Blackness and not understanding what it means to be a Black man in America, and what it would mean for our kids to see those things floating around the internet.”

Despite their split, Rachael confirmed on Monday night that she is still in love with Matt. “You were the only reason that I decided to do the show,” she said. “That includes every single part of you, and that obviously includes you being a Black man. I’ve never experienced a love like this, so I don’t see anyone else out there for me. At this point, I just don’t see how I can have these same feelings for someone else.”

Rachael doubled down on her love for Matt in her latest Instagram post, writing that she “knew from the first night” that Matt would be an important part of her life. “While I never expected this outcome, I respect his decision completely,” she wrote. “Of course I wish circumstances were different, but I still feel blessed for the time we did have together and the memories we made. I got to fall in love, and I truly believe he was the love of my life. He will always hold a piece of my heart. I’ll always be hopeful and believe what’s meant to be will be.”

More like this
Here's Exactly When Rachel & Tino's Fight Happened After 'The Bachelorette'
By Grace Wehniainen
'The Bachelor's Peter Weber & Kelley Flanagan Are Reportedly Back Together
By Grace Wehniainen
Where Is Former Bachelor Host Chris Harrison Now & What Is His Net Worth?
By Hugh McIntyre
Everything To Remember About Lace Morris Before 'Bachelor In Paradise' Season 8
By Grace Wehniainen
Get Even More From Bustle — Sign Up For The Newsletter