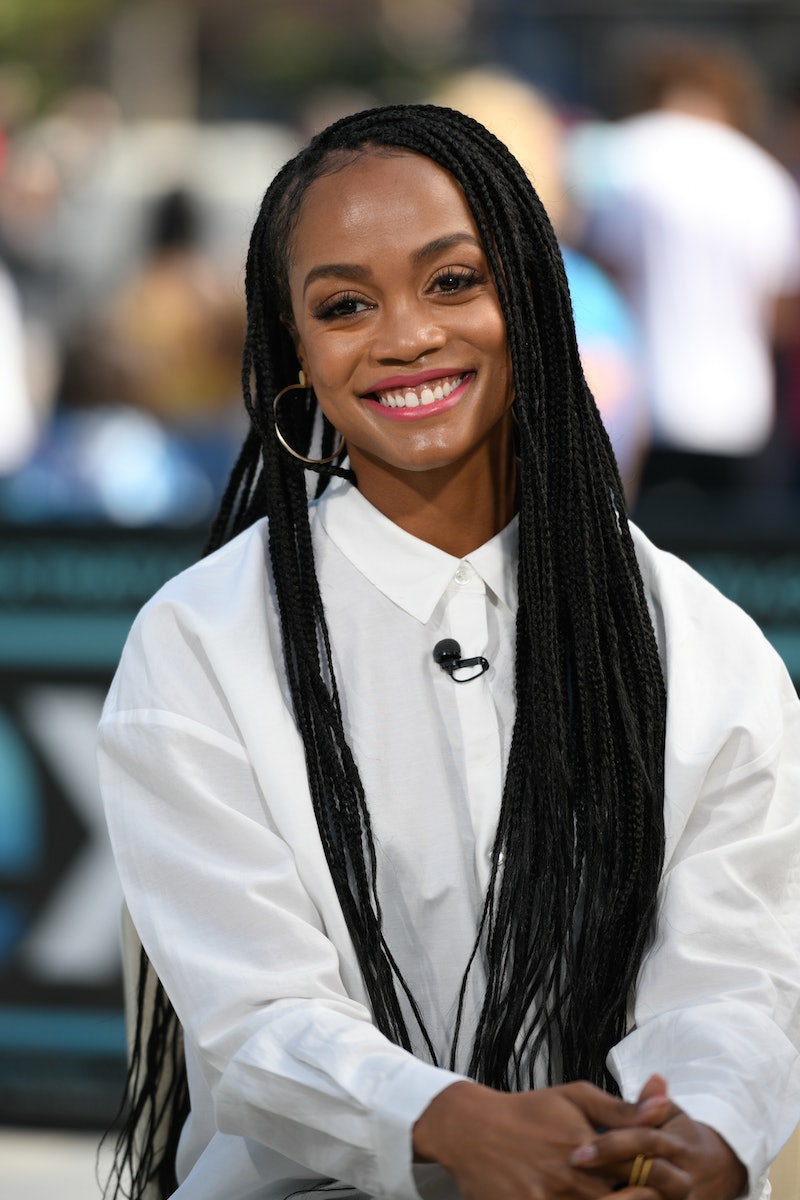 Two days after a controversial interview with The Bachelor host Chris Harrison went viral, Rachel Lindsay intends to break ties with Bachelor Nation. Never one to shy away from spotlighting the franchise's issues with racial diversity and representation, she spoke to Harrison about rumors surrounding Matt James' frontrunner Rachael Kirkconnell. Over the course of Lindsay's Extra interview with Harrison, the longtime host often came to Kirkconnell's defense for past racist actions, including attending an antebellum plantation-themed college party in 2018. His comments caused widespread fallout, including a petition for Harrison's removal as host of The Bachelor.

"During that conversation, he talked over me and at me, during that conversation," Lindsay, 35, said during Thursday's episode of the Higher Learning with Van Lathan and Rachel Lindsay podcast. "He never gave me room to talk. And he never gave me room to share my perspective. He wasn’t trying to hear it. He was just trying to be heard. And that’s because I felt like he had an agenda that he was trying to push." Lindsay, who became the first Black Bachelorette in 2017, said, "The things that were boiling to me the most were the compassion and the grace and the space that Chris Harrison wanted to give to Rachael but couldn't give it to this Rachel in the interview. [He] couldn't give it to the people that were offended by the things that she did. Where was the compassion for them? Couldn't give it to them."

After receiving widespread backlash from Bachelor Nation, Harrison issued an apology on Feb. 10, explaining that his "intentions were simply to ask for grace in offering her [Kirkconnell] an opportunity to speak on her own behalf." He continued, "What I now realize I have done is cause harm by wrongly speaking in a manner that perpetuates racism, and for that I am so deeply sorry." But Lindsay said on the podcast that she was "having a really, really hard time... accepting this apology.

"When I finished that interview with Chris Harrison, he had no problems with it," Lindsay added. "He was fine. He texted me after. He appreciated the conversation. ... He was like, 'Yeah, I'll probably get a little flack,' but thought it was great that we could disagree but do it in a civil way. It wasn't until the backlash came the next day. It wasn't until people start talking, people start demanding and calling for different things, that he then apologized to me and then apologized publicly."

She went on to say, "I'm trying to reason — well, which one is it? Because to me, Tuesday was your truth and Wednesday is after the fact. Wednesday was a response to the backlash." (Kirkconnell has also released her own apology via Instagram, one that Lindsay said was a "baby step," but "put Chris' to shame.")

Lindsay's sole Instagram grid post following the interview is a shot of herself doing yoga. "God grant me the serenity to accept the things I cannot change, Courage to change the things I can, and Wisdom to know the difference 🖤," she captioned the image.

Lindsay, who also co-hosts the Bachelor Happy Hour podcast alongside former Bachelorette Becca Kufrin, is now looking to part ways with the ABC franchise. "As far as me, I'm f*cking tired. I'm exhausted. I have truly had enough," she said on Higher Learning. "My entire reason for doing The Bachelorette — and I was lucky that it worked out for me in the most beautiful way in finding Bryan [Abasolo, her husband since August 2019] — is that I wanted to be representative as a Black woman to this audience. And I wanted to pave the way for more people to have this opportunity. In some ways, that has happened."

Still, Lindsay admitted to wanting "the franchise to be better," adding, "I have a love/hate relationship with it. I'm connected to it. It did stuff for me, and I'll never forget that. But how much more do I want to be affiliated with this? How much more can I take of this?" She then said, "I can't take it anymore. I'm contractually bound in some ways, but when it's up, I am too. I can't. I can't do it anymore."

Since both Kirkconnell and Harrison's apologies, James shared Lindsay's latest Instagram post on his Story. He wrote, "I am beyond grateful to have Rachel as a mentor during this season. Your advocacy of BIPOC people in the franchise is invaluable, I stand with you and the rest of the women advocating for change and accountability." The other cast members on James' season released the following statement regarding recent developments:

"We are the women of Bachelor Season 25. Twenty-five women who identify as BIPOC were cast on this historic season that was meant to represent change. We are deeply disappointed and want to make it clear that we denounce any defense of racism. Any defense of racist behavior denies the lived and continued experiences of BIPOC individuals. These experiences are not to be exploited or tokenized."

Despite the ripple effect of Lindsay's interview with Harrison, she revealed that some asked why she didn't "press harder" during the sit-down. "It is a struggle being a Black woman on television," she said on the podcast. "I have to stay calm. I cannot react. I cannot show emotion. And the reason is, once I do that, that is all people will see. I will be angry. I will be aggressive. You will not hear what I'm saying. You will not hear what the other person — Chris Harrison, in this instance — is saying. You will only see the reaction."