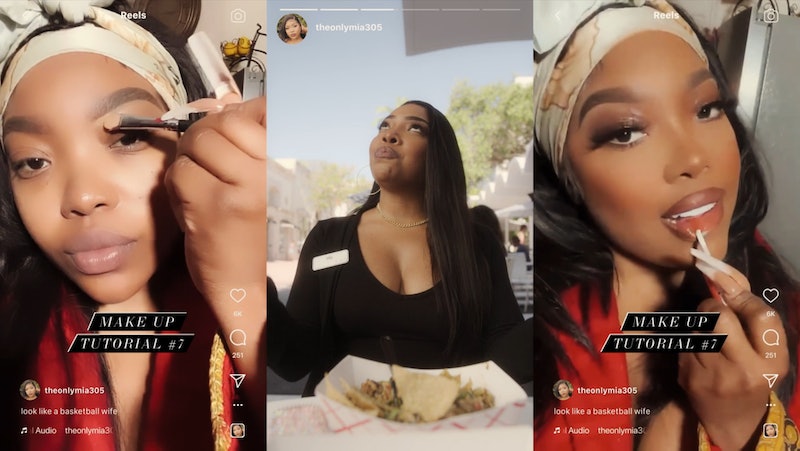 The first 60 seconds of Issa Rae's new HBO series Rap Sh!t are a glorious whirlwind. The Earth spins, zooming into Google Maps’ street-level view of Miami before transitioning to a swirl of Instagram stories that moves down South Beach. We’re introduced to the show’s protagonist Shawna (Aida Osman) via a hotel guest’s video, and the texts and notifications don’t stop there — they’re constantly in frame, mimicking the 24/7 rhythm of life in the social media age. While the dramedy about two friends with rap girl dreams is nominally about music, it’s social media — and the ways Shawna and her friend Mia (KaMillion) use it as they navigate their lives — that steals the show.

Watching text messages pop up onscreen or viewing a scene via video call certainly isn't new to television. Yet first-time showrunner Syreeta Singleton prefers to use social media to develop her characters rather than simply advance the plot, showing how 20-somethings Shawna and Mia move through their lives and careers by weaving in their curated personas across various social interfaces.

While the initial draft of the Rap Sh!t pilot was told entirely through social media and screens, director Sadé Clacken Joseph was tasked with finding more balance in navigating the space between the real world and what Shawna and Mia document online. “The script has such a unique perspective,” Joseph tells Bustle. "It was just a matter of, 'How do we still make the use of social media and devices feel very prominent in the piece?' Then, when we're outside of the world, it's only enhancing or showing us something completely different that we're not seeing in the digital language of social media."

With Mia and Shawna using everything from Instagram, to TikTok, to OnlyFans, to Google Maps, it would be easy for the constant barrage of apps and notifications on screen to distract from the actual story. So Joseph created a visual bible for how scenes from social media and scenes from the real world would look that involved using different cameras and lenses for each. "I didn't want to do anything that we've seen before when it comes to using social media,” she adds.

Beyond aesthetics, the key to Rap Sh!t’s stylistic approach to social media is its understanding of how its characters use it. Eagle-eyed fans will notice that the social-media savvy Mia's platforms look very different from the esoteric, introverted Shawna's. Mia, who is on her "fine bitch shit," knows how to put on an act. “I wanted Mia to feel different when she was on Instagram Live versus OnlyFans versus when we see her talking to her mom,” Joseph says. In every photo and clip she shares with her sizable following, Mia puts her best foot forward, showcasing bonding moments with her young daughter, her makeup skills in countless tutorials, and her humorous advice for dealing with men. But while Mia may appear put together and carefree, in reality, she’s struggling financially and constantly at odds with her daughter’s father, Lamont (RJ Cyler).

“There are always different levels of how we present ourselves to the people around us,” Joseph says. “I've always been fascinated by stuff like this; I studied anthropology in undergrad, so it was a lot of fun to try and get it right."

As for Shawna, she clings to her social media as a time capsule for her deferred dreams. Determined to subvert the male gaze in her music, she often appears in an oversized black hoodie and printed mask. Still licking the wounds from her failed record deal, she spends her days working at a boutique Miami hotel. “I think it was fascinating to highlight where Shawna comes from because we're going to see her change so much throughout the season,” Joseph says.

For Joseph, chronicling the highs and lows of Shawna’s career reflects the challenges and sacrifices Black artists face in the music industry today. “We don't see where Megan Thee Stallion started or the City Girls,” she says. “I think it's imperative to show people the struggle, what it takes, and what we lose of ourselves as artists, especially if you're a woman in the industry.”

In that way, Rap Sh!t is also about the politics of creation, self-promotion, and myth-making. “This story is about making it in this day and age and how we're forced to present ourselves in a certain way. It's tied to our success, and we have to sometimes compromise who we are or lean into different versions of ourselves to make it. It just feels very authentic in the show,” Joseph says. “We put our hearts and souls into it.”

More like this
At 14, Tatiana Maslany Was Obsessing Over Tamagotchis & The Spice Girls
By Gabrielle Bondi
At 14, D'Arcy Carden Was Sneaking Out To Parties & Crying Over Kurt Cobain
By Ivana Rihter
Here’s Why 'Pretty Little Liars: Original Sin' Season 2 “Won’t Be The Same”
By Kadin Burnett
On 'Industry,' Marisa Abela Takes Control
By Morgan Leigh Davies
Get Even More From Bustle — Sign Up For The Newsletter