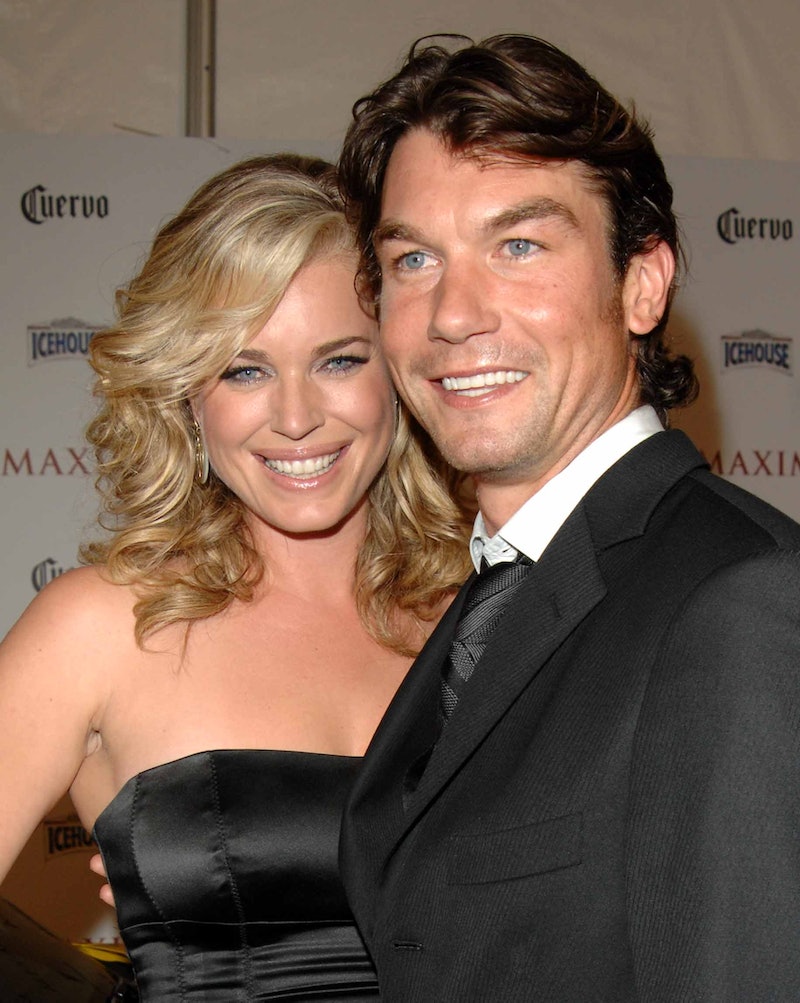 The iconic show The Love Boat is back with a new twist. The Real Love Boat takes cues from the 1970s series, trading the original cruise ship for a luxury liner that sails the Mediterranean while singles look for love onboard. The series will feature mixers and challenges; one lucky couple will walk away with a cash prize.

Longtime couple Rebecca Romijn and Jerry O’Connell will host the new CBS series, tapping into their own tips and tricks for a happy marriage along the way. They met almost 20 years ago when they were both involved with other people, but soon began dating once they were single. In 2007, they tied the knot, and a year after welcomed twins together. Since then, it’s been smooth sailing for O’Connell and Romijn. Here’s a closer look at their relationship timeline.

The future couple met at a Maxim Hot 100 pool party in Las Vegas in 2004 while Romijn was in the midst of divorcing Full House star John Stamos, whom she had been with for 10 years. O’Connell was previously seeing Giuliana Rancic but decided to make a move on Romijn. “My friend said, ‘get her number’,” Romijn recalled on an episode of The Talk. “And [O’Connell] said, 'she's on a date.' And she said, 'I hate that guy. Get her number.’”

But before he could get her number, O’Connell first had to find a way to get to her in the VIP section. “Rebecca was in the VIP section of the party and I was not,” O'Connell told audiences in 2019 while guest-hosting The Wendy Williams Show. “I saw you in the VIP section and you were newly single and I was like, ‘I got to get some of that, right there.’ It was a pool party, so I took my shirt off, I did some pushups right there and got some oil. I was super flexing. I had met my wife once before that at the time. But through the rope I was like, ‘Hey, Rebecca!’”

Once O’Connell made it into the exclusive section of the party, the rest was history. “He looked good,” Romijn admitted. “He was in a bathing suit.”

From there, the relationship flourished and they quickly began seeing one another. “We had a couple dates in Las Vegas and then I flew home and I needed a ride home from the airport,” Romijn recalled on The Wendy Williams Show. "And I called Jerry and he drove me home and basically never left.”

After getting engaged in 2005, the pair married in an intimate ceremony two years later. According to People, they “exchanged vows in front of 100 family and friends. The couple’s two dogs Taco and Better – dressed in black bow ties – also joined in on the festivities, running around the grounds.”

Romijn and O’Connell wanted the affair to be personal and even told their friends and family they were hosting a “special barbecue” before they arrived at the wedding in their backyard. “Having the wedding at home makes it personal,” O'Connell told InStyle at the time. “It becomes more about you as a couple.”

Celebrity friends like Josh Duhamel, Fergie, and Vanessa Williams were in attendance.

A year after their wedding, the couple announced they were expecting twins. They are the parents of twin daughters Dolly and Charlie.

Romijn told People that parenting twins have allowed her to be less of an overbearing parent. “It’s hard with twins because it prevents you from being too much of a helicopter mom. You’ve got two at the same time to take care of, and the one who needs you the most is the one who gets you.” She continued, saying that it wouldn’t work without the teamwork with O’Connell. “In our efforts to raise normal, loving children, we tag-team with work, typically,” she said. “So when he is traveling for work, I usually am the mom at home, and vice versa — when I’m traveling for work, he stays home.”

After four years of marriage, the couple decided to renew their vows on the auspicious 11/11/11 date. 11:11 has been a significant time and date within their marriage. “If we happen to look at our phone and it’s 11:11, one of us always texts the other,” O’Connell said. “There’s two of us — Rebecca and I — and the two of our kids.”

They waited until the clock hit 11:11 before restating their love for one another in an intimate ceremony near New York City’s Hudson River. “I didn’t think [renewing our vows] was gonna be so emotional, but it was … I think I was more emotional than my wife,” O’Connell said of the special moment.

O’Connell and Romijn shared in February 2012 that they still make each time for each other between their careers and raising their children. “ Once a week we have a date night. But sometimes I don’t really keep up with that promise a lot because we do have two little kids and we can’t always find a sitter,” O’Connell explained to OK Magazine. “I’m working here in New York, and Rebecca has been in L.A. for a little bit, so I fly out on my day off. It’s tough, but we do try to get at least one day a week for just the two of us, so we don’t go crazy.”

Adding: “Otherwise, all of our dates would consist of going to see animated movies and eating mac-and-cheese at family-style restaurants.”

2019: Sharing The Secret To Their Marriage

In October 2019, O’Connell told Hollywood Life the secret to their long-lasting love. O’Connell joked: “I’m as shocked as you, I’m more shocked than anybody. What is our secret? Have twins, and then you can’t get divorced because neither one of you wants the twins by yourself so you have to stay together.”

He added that their love of animals also plays into their strong connection, gushing about fostering and adopting animals. “No, you know what? Lot of animals, we have a lot of animals in our house, and that helps too.”

It was announced in June 2022 that the couple would be hosting CBS’s reboot of the dating show, sailing the Mediterranean in a luxury cruise ship looking for love.

“After years of consuming, arguing about and dissecting unscripted television, hosting a reality series where a group of singles look for love while aboard a Princess Cruise ship, seemed like a dream come true,” Romijn and O’Connell said in a statement via The Wrap. “When we heard it was aboard ‘The Real Love Boat,’ that dream got an iconic theme song: ‘We promise something for everyone.’” Bon Voyage!

In July, the happily married couple celebrated their 15th year of marriage. Both took to Instagram to share their love and photos of their favorite moments together.

O’Connell posted a snap from vacation captioning it, “15 Years Today! This one puts up with my Mommy Issues, cheapness and is infinitely out of my league. INFINITELY. HAPPY ANNIVERSARY! Love ya, Babe!”

Meanwhile, Romijn simply referenced their happiness together saying, “Still smiling after all these years.”

Intimacy has been the secret to a long and healthy relationship, and both have commented on their “romantic” marriage. “Whenever there’s a movie coming out that he knows I would like — there were four of them in a row last year and every weekend he would take me out, not tell me what we were seeing, made me cover my eyes when we’re walking into the theater, took me out to dinner, took me to a movie,” Romijn said while O’Connell was hosting The Wendy Williams Show. “There were four great movies in a row. I love mystery dates!”

Elsewhere on the show she also teased him about working on his “endurance” in the bedroom. O’Connell defended himself jokingly saying, “Sometimes I’m a little fast, okay. I mean, it happens sometimes. Listen, it’s a difficult — we have kids running around. Sometimes it’s like, ‘You have 10 seconds to do this right now. You have 10 seconds, go, go, go, go go!’ And you have to like train yourself to be fast.”