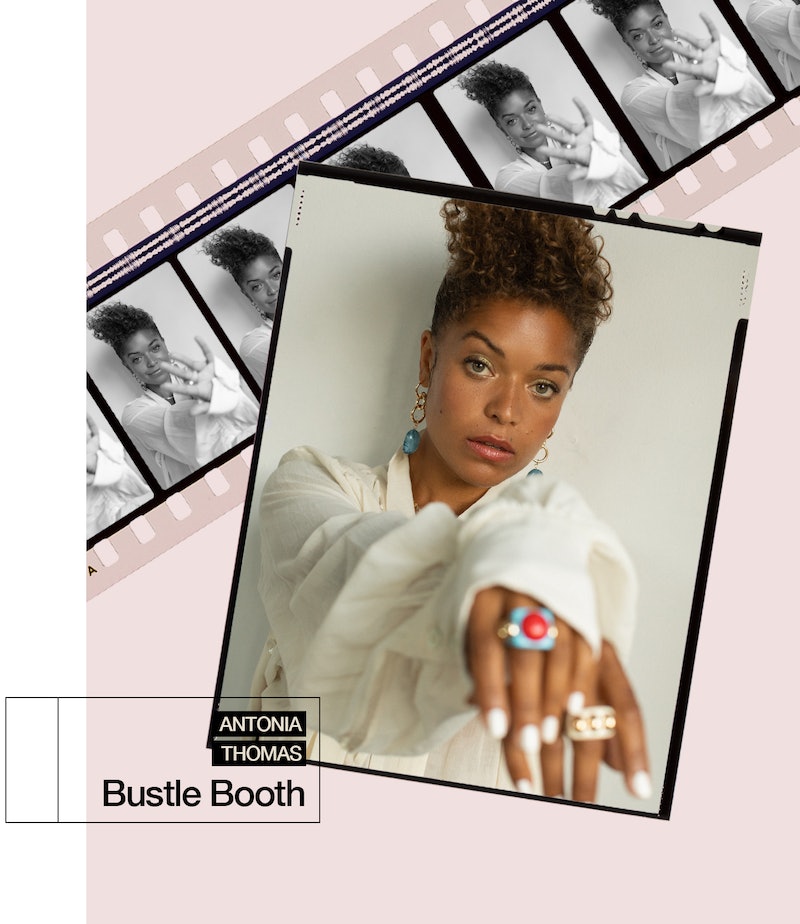 When Antonia Thomas and I sit down for our Zoom chat a few days ahead of Red, White & Blue’s BBC premiere, the actor is looking out over a very grey morning in Vancouver – a “souped-up London,” as she calls it. Thomas is just about to begin a day of shooting for The Good Doctor, a medical drama where she stars opposite a fellow Brit, Freddie Highmore.

The Good Doctor may not have name recognition in the UK quite yet, but over in the U.S., it’s recently taken over Grey's Anatomy to become ABC's most watched drama. “A lot of people here just know me for playing this American character,” Thomas tells me. “It's new and cool because I’ve always wanted to work in America, but also I still feel very British.”

I tell her the feeling is mutual, admitting I’ll always think of her as Alisha in Misfits, one of the most iconic British shows of the 2010s. Does she get that a lot, I ask? “Yeah, Misfits is still the one I get recognised for,” she says. “But I kind of love it in a way, because even though it was sort of my first job, it's still one of the ones that I'm proudest about. It was just a great thing to be a part of.”

And then there’s Lovesick, a show where Thomas’ character Evie is caught up in a three-season-long will-they-won’t-they relationship with Dylan, played by folk singer and Emma star Johnny Flynn. Lovesick became rapidly popular when it made the transfer from Channel 4 to Netflix, and fans are dying for a reunion. “Aren't we all? I would love to do Lovesick season four,” Thomas tells me, describing Flynn as a “diamond.”

Thomas’ latest project is one of her biggest yet, starring in Red, White, and Blue, the third instalment in Steve McQueen’s Small Axe series. “It was a really special experience,” she says, telling me that McQueen was top of her ‘Directors I’m Desperate To Work With’ list.

Thomas plays Gretl in Red, White and Blue, the wife of Leroy Logan, a real-life figure whose story the film portrays. The chemistry between Thomas and her on-screen husband John Boyega is easy and endearing, with moments of tenderness between them working beautifully to contrast the hardship Leroy faces elsewhere. Thomas describes Boyega as a “generous” screen partner. “He just made me feel incredibly comfortable. It was very easy working with him. He's lovely.”

Red, White and Blue is based true events in Leroy’s life, including the brutal attack his father Kenneth faced from police officers which made him question his decision to sign up to the force and the continual overt racism he (and his community) faced from colleagues within the Met.

“Red, White And Blue is quite particularly about police brutality and institutionalised racism,” says Thomas, “and all of the things that we know to have been true then, and to be true now. I think it's really important. It allows us to look at where we were and how far we have come in a lot of ways but also think about how far we have to go. It shows us we have to keep pushing, to keep learning, and to keep our minds open.”

Get to know more about Antonia in her Bustle Booth questionnaire below.

"Here’s looking at you, kid"

If you had to go on a reality TV show, what would it be?

"Never Ever" by All Saints

What’s something that's inspiring you lately?

Red, White & Blue, part of Small Axe, is coming to BBC One and iPlayer on Sunday Nov. 29.

More like this
'Abbott Elementary' Fans Probably Missed This 'Parent Trap' Easter Egg
By Sam Ramsden
Adam Ali Hopes 'Waterloo Road' Will “Subvert” Queer Misconceptions
By Sam Ramsden
Yes, 'The Price Of Glee' Is Available To Watch In The UK
By Catharina Cheung
A New Netflix Doc Will Explore The Unsolved Murder Of Jill Dando
By Sam Ramsden
Get The Very Best Of Bustle/UK
Sign up for Bustle UK's twice-weekly newsletter, featuring the latest must-watch TV, moving personal stories, and expert advice on the hottest viral buys.