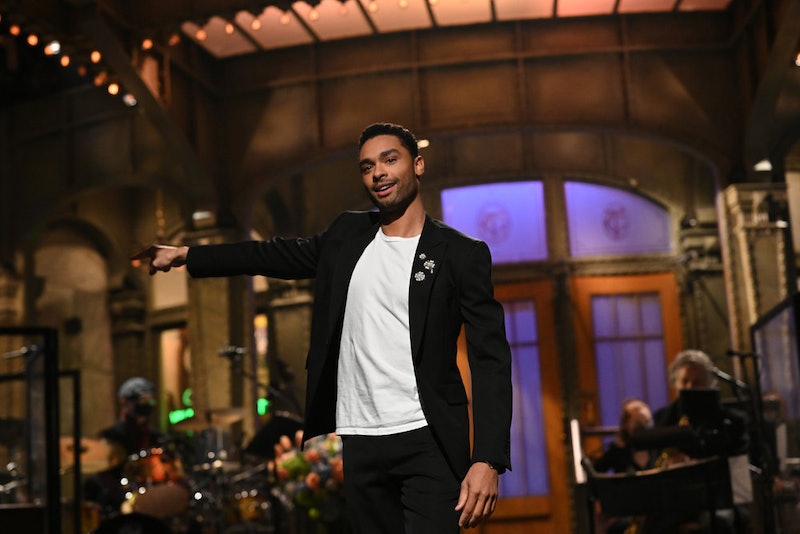 Not since Berger wrote, "I'm sorry. I can't. Don't hate me—" to Carrie on Sex and the City has a Post-It note garnered this much attention. But the office supply is having "a moment" after Schitt's Creek star Dan Levy started a new Saturday Night Live tradition for incoming hosts. When he hosted the series in early February, the 37-year-old left a Post-It for Regina King, who was set to host the following week. "Regina! You got this! Much love, Dan," the note read, which she shared in a mirror selfie on her Instagram story.

King, 50, paid Levy's gesture forward and left Bridgerton's Regé-Jean Page a bit of encouragement. "You got next and you are going to be amazing," King wrote to Page, 31. "I'm a big fan." Page then posted the photo to his own Instagram story, writing, "The feeling is very mutual." Sticking true to form, he passed a note to Nick Jonas, who pulled double duty as both host and musical guest for the Feb. 27 episode of SNL. "Just have the BEST time, Nick!" Page penned to Jonas, 28. He shared his selfie to Twitter, adding, "That's the plan! Thanks for the note @regejean."

Ahead, a look at the chain of recent SNL hosts with their Post-It note selfies.

Maya Rudolph is poised to host Saturday Night Live next when the series returns on March 27. She's no stranger to Studio 8H after spending seven seasons as a full-time cast member from 2000 to 2007. Then Rudolph made her hosting debut in 2012 and has returned multiple times since, most recently portraying Vice President Kamala Harris in the lead-up to the 2020 election. But although she's a seasoned SNL professional, it would feel like a major blow to see this host rite of passage end anytime soon.