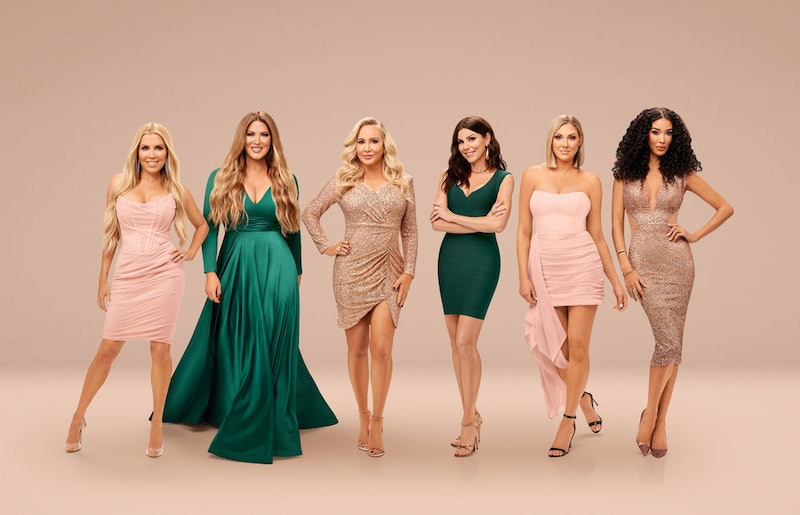 To give Bravo’s The Real Housewives of Orange County a “reboot” for Season 16, executive producer Andy Cohen recruited Fancy Pants herself, Heather Dubrow, to make a comeback. Speaking to Entertainment Weekly ahead of her return, Heather explained that Andy told her the network wanted to “bring back some glory of previous seasons” and take RHOC “in a different direction,” following the exits of Kelly Dodd, Braunwyn Windham-Burke, and Elizabeth Lyn Vargas. “And when they explained to me the direction of the show and what kind of cast they were looking for, I felt comfortable that that would be a situation that I would be happy in,” she added.

Looking ahead to RHOC Season 17, however, Bravo might experiment with another cast shakeup, in light of declining ratings. After the April 13 finale brought in the season’s lowest viewership to date, Bravo announced the reunion would air in only two parts. In comparison, recent RHOA, RHOBH, and RHOP reunions featured four parts, though they did have Erika Jayne’s legal drama and a Nicki Minaj guest-hosting gig, among other things, to include.

After Kelly called out the show’s ratings in a December tweet, asking Andy how “that reboot” was going, her former boss replied, “Reboot going great. Feels like a return to form for #RHOC. Look at the delayed numbers, not live. That’s what’s measured.”

Though it’s unclear if his opinion has since changed, Kelly — who refers to herself as a “Former Real Housewife of Orange County REJECT” in her Twitter bio — continued to take shots at the show and her former castmates all season, including in real-time while Heather was on Watch What Happens Live in December. As such, she likely won’t be returning to Season 17, but here’s everything to know in the meantime.

Only three women — Emily Simpson, Shannon Storms Beador, and Gina Kirschenheiter — returned for Season 16, which also introduced new cast members Heather, Dr. Jen Armstrong, and Noella Bergener to fill the vacancies left by Kelly, Braunwyn, and Elizabeth. However, Bravo doesn’t typically confirm casting until about a month before a new season premieres, so it’s unclear which of the women will be back for Season 17.

RHOC alum Tamra Judge, who recently starred in Peacock’s The Real Housewives Ultimate Girls Trip Season 2, confirmed her RHOC return on July 20. She broke the news with the help of Andy Cohen on an episode of WWHL. Judge first teased in February that she would come back to RHOC, telling Cohen, “I am so thankful for everything you’ve ever given me, so...”

On August 1, People reported RHOBH alum Taylor Armstrong will be joining the cast of RHOC for Season 17. The announcement of Armstrong’s casting makes her the first full-time cast member to switch from one franchise to another in Real Housewives’ history. Armstrong was an original member of the RHOBH cast when the show premiered in 2010 and left after three seasons. The addition of Armstrong to the RHOC cast comes on the heels of her return to reality TV as a member of the cast of Peacock’s The Real Housewives Ultimate Girls Trip: Ex-Wives Club, where she starred alongside Judge and RHOBH co-star/nemesis Brandi Glanville.

Other possibilities could include some second-generation cast members. During an April 11 WWHL after-show, RHOC alum Lauri Peterson’s daughter Ashley Zarlin also revealed that she and Kara Keough are ready to follow in their moms’ footsteps and become the first legacy Housewives. “We started it all, it’s so crazy to see how big it’s gotten,” she said of Bravo’s first Real Housewives franchise, telling Andy that she’s “still waiting for the opportunity” to hold her own orange.

While any sort of potential retooling would likely cause a delay (see: RHONY’s current hiatus), most Housewives franchises typically return in less than a year. Depending on when RHOC begins production, filming typically lasts about three months before the editing process starts. RHOC Season 16, for example, began filming in July 2021 before premiering in December. If the next installment follows the same schedule, viewers could expect a new season as early as late 2022, but early 2023 seems to be a safer bet.

This post will be updated as more details about RHOC Season 17 become available.

More like this
Everything To Know About 'RHONJ' Season 13
By Brad Witter and Jake Viswanath
‘RHOSLC’ Star Jen Shah’s Arrest & Legal Drama, Explained
By Brad Witter and Jake Viswanath
The 'Bachelor In Paradise' Schedule Shifts To 4 Hours Every Week After The Season 8 Premiere
By Brad Witter
Nicola Coughlan Shared A Lady Whistledown Excerpt From ‘Bridgerton’ Season 3
By Grace Wehniainen, Alyssa Lapid and Sam Ramsden
Get Even More From Bustle — Sign Up For The Newsletter

This article was originally published on April 27, 2022