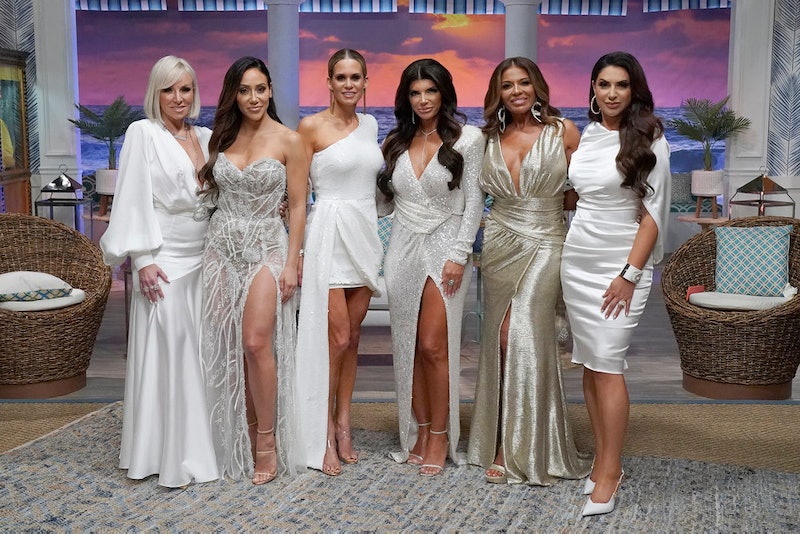 On May 17, The Real Housewives of New Jersey wrapped up Season 12 with a bag with its third and final reunion episode. And while Bravo has yet to renew RHONJ for Season 13, filming for the upcoming season has already wrapped. The network doesn’t typically announce Real Housewives renewals until shortly before a new season’s premiere date, but the high Season 12 ratings, cast member Teresa Giudice’s anticipated wedding, and the drama that went down just days prior make Season 13 essentially guaranteed. In fact, OG Housewife Teresa might even receive her own multi-episode wedding spin-off that would air right after the new season.

The April 26 Season 12 finale scored a season-high viewership, with nearly 1.2 million people tuning in. (For context, that’s higher than any 2021 episode.) It also marked the fifth Season 12 episode with more than one million live viewers. That trend continued into the first and second episodes of the RHONJ reunion, both of which topped one million viewers.

Here’s everything we know about RHONJ Season 13 so far.

While Bravo typically doesn’t release official cast lists until about a month ahead of each season’s premiere, the Instagram account @bravoandcocktails_ reported via an anonymous tip that the entire cast is returning. Shortly after, the fan account RHONJ Obsessed revealed more details, alleging that Jackie had been demoted to friend status and Bravo was testing three new women: Teresa’s friend Danielle, Marge’s friend Jennifer, and Melissa’s friend Rachel. No last names were given.

Dolores’ ex-husband Frank Catania gave credence to the alleged news, telling The Morning Toast on May 24 that he “heard” Jackie had been demoted and Traci was “gone” completely, but noting that “nothing’s definitive ever here.” Jackie herself couldn’t confirm or deny the rumors, telling E! on July 18 that she’s “filming all the time” and is fine with any decision Bravo makes. “Sometimes they make these decisions at the last second,” she explained. “No matter what they decide, I go into filming doing the same exact thing that I've been doing for the past five years... That being said, I don't know what they're going to ultimately decide.”

In August, Page Six reported that Jackie ultimately was demoted to a friend role for Season 13, with newbies Danielle Cabral and Rachel Fuda reportedly joining the cast as new full-time Housewives. Bravo has yet to confirm the news, and likely won’t until the new season is actually announced.

On May 26, RHONJ Obsessed shared behind-the-scenes photos indicating that RHONJ Season 13 had begun filming. Season 12 ultimately premiered on Feb. 1. If this timeline holds, a late May start date could mean new episodes begin airing in January or February 2023. But RHONJ has gone through several scheduling shifts throughout the franchise’s 12 seasons, so anything is possible.

Will Teresa's Wedding Be Shown On RHONJ Season 13?

Teresa Giudice’s wedding to Luis Ruelas happened on Aug. 6, and fans are likely going to see it play out — just not on Season 13. Days before the ceremony, US Weekly reported that her wedding would be filmed for a separate RHONJ wedding special. Teresa hinted at a spin-off in May, telling ET that her wedding wouldn’t be televised — at least “not on Housewives” — but she still wanted fans to watch it. “They’ve been on this journey with me, so of course I want them to see it. I really do,” she said. “It’s [also] something I'll always have for myself, and, I don't know. I’m still torn.”

Most of Teresa’s current RHONJ castmates attended the wedding, with Dolores and Jennifer serving as bridesmaids. Several past and present Housewives from across the franchise were also guests, including Teresa’s Ultimate Girls Trip castmates Kenya Moore and Cynthia Bailey, Phaedra Parks from Atlanta, Dorinda Medley and Jill Zarin from New York, Ashley Darby from Potomac, Alexia Echevarria from Miami, and Chanel Ayan from Dubai. However, one major Housewife was nowhere to be found.

Fans have known since March that her sister-in-law, Melissa, will not be a bridesmaid, but she and Joe Gorga, Teresa’s brother, didn’t end up attending the wedding at all. PEOPLE reported that the couple had a huge blowout with the newlyweds while filming the Season 13 finale just days before the wedding. “Teresa betrayed them in a way that's unforgivable,” a source told PEOPLE. “They're not going to celebrate Teresa's new marriage when all she does is try to tear apart theirs.” Alleged rumors circulated among the cast that Melissa had cheated on her husband, which was the cause of their reported fight. “Melissa was blindsided by the ‘rumor’ that was revealed,” another source told US Weekly. “That’s when things escalated and got out of control.”

On the Aug. 11 episode of her On Display podcast, Melissa and Joe began to explain why they missed Teresa’s wedding, teasing that all would be revealed on the new season. “There was something that went down at the finale of filming,” Melissa said. “Anything that we have filmed is something that I am not able to talk about.” She went on to explain that it would have been “very strange” if she and Joe were “sitting in the pews [and] wishing them well on their wedding day” after what happened. “I'm just shocked at the way I'm treated by my own family, my blood,” Joe added. “I can meet a stranger, and they can know right away, they're like, ‘Yo, this guy's great, I love him, he's awesome, he's real.’ I'll brag about that, 'cause I am. And then it's shocking when I go and see our family. Why am I getting treated that way? Why are you treated that way? Why are we so bad?”

During the Season 12 reunion, the women agreed to stop pretending to be friends, and in a May 16 interview on Betches’ Mention It All podcast, Melissa said she has “no guilt” over ending efforts to repair their relationship. “We are all, as a cast, sick of it,” Melissa said. “Does anybody really wanna see Teresa, Melissa, and Joe argue and make up to break up? Just leave it alone! ... I don’t care if we never talked about it again. You have me all f*cked up and you got it twisted. I don’t want to talk about Teresa or the family, never again if it was up to me.”

Teresa seems to be on the same page, telling Extra after her Dancing With the Stars debut on Sept. 19 that she hadn’t reconciled with Melissa and Joe. “If I did, they would’ve been here,” she explained. In a separate interview with E!, she indicated that she doesn’t see herself mending fences with her brother and sister-in-law at all. “No, no, no, that's really it,” she said. “That's it.”

As drama continues to brew, expect plenty of Season 13 plot points to drop between now and the premiere.

This post will be updated as more information about RHONJ Season 13 becomes available.

This article was originally published on May 17, 2022