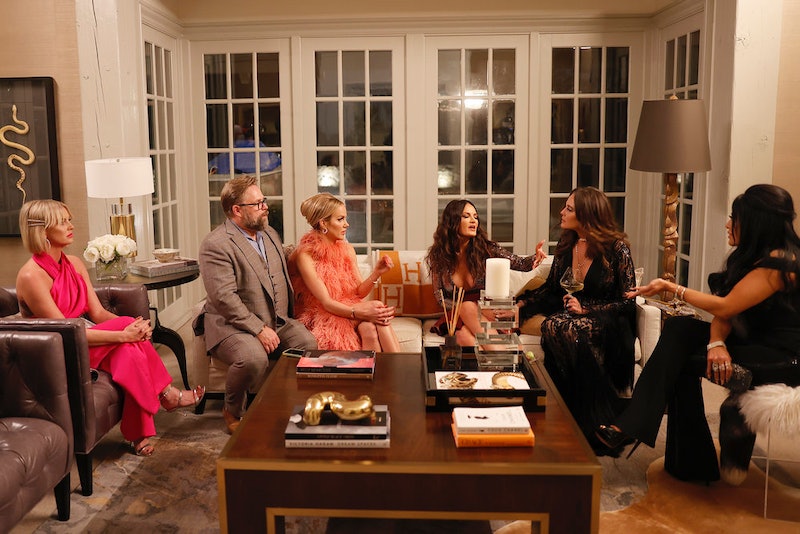 Angie Harrington is the newest addition to Bravo’s Real Housewives of Salt Lake City, having joined the cast for Season 2 as a “friend of” Lisa Barlow. The pair’s friendship goes back over 20 years, as they met while employed at a call center as young adults, but a lot can change in a short amount of time. Angie has become close with Whitney Rose throughout Season 2, which Lisa isn’t happy about, as she and Whitney don’t get along. Tensions then increased with Lisa after Angie and Whitney found out they share a great great great grandfather and are actually cousins. Their newfound bond led to Angie being labeled as “Whitney’s friend” on the show.

The longtime friends’ budding feud came to a head during the Oct. 3 episode when Whitney convinced Angie that Lisa sabotaged her fundraiser by somehow influencing the catering company’s last-minute decision to back out of the event. After a confrontation with Angie, Lisa wasn’t happy — and ruthlessly referred to Whitney and Angie as “inbred polygamy cousins.” But aside from the scathing drama, who is Angie Harrington? Here’s everything you need to know about the newest addition to RHOSLC, including her Instagram, job, and more.

Angie is very active on her Instagram account, where she frequently posts photos from events, vacations, and her Utah home. According to her bio, she’s interested in “fashion” and “lifestyle” and describes herself as an “amateur ufologist.”

She often also shares glimpses into her family life with her husband, Chris Harrington, the President of Global Revenue and the CRO at software company Entrata. The pair married in 2017 and share a “large blended family” complete with a son, Hart, who is currently a toddler. Additionally, Angie has two older sons from a previous relationship, one of whom is openly transgender. Her support for the LGBTQ+ community has been a major aspect of her RHOSLC storyline.

Aside from her work on RHOSLC, Angie runs a fashion and lifestyle blog called The Fashion Ruse. In an interview with The Newsette, she said the goal of the site is to “help others to look and feel their best to become their best at any price point.” However, she only tends to The Fashion Ruse in her free time when she’s not being a full-time mom. “I try to get most of my blog/styling work done by 3 p.m. and after the kids go to bed so that I am available to my children,” she detailed.

Mormonism is a common religion in Utah and a frequent topic of discussion on RHOSLC. On the show, Angie revealed she used to belong to the Mormon church but left along with her family in response to her son’s process of coming out as transgender. “Having a transgender child in the Mormon community has not been acceptable,” she said in a recent episode, per Nicki Swift. “I will say the Mormon community is making strides to understand... As of now, I am not Mormon, and my husband and I are kind of like — until [members of the LGBTQ+ community] have the same rights that the rest of us have, we don't know if it works for us.”

To support her son, Angie threw the now-infamous fundraiser event in Episode 4 of Season 2, which benefitted a non-profit called Encircle that “builds safe spaces for LGBTQ+ youth, young adults and families.”

Angie and Whitney’s allegations against Lisa regarding the fundraiser’s caterer ultimately led to a falling out between the longtime friends. Speaking to Entertainment Tonight for an Oct. 8 interview, Lisa denied causing the catering company to pull out of the event and said the scenario “is the most ridiculous accusation I’ve ever had.” She continued, “Never would I ever cancel somebody's caterer, nor would I even think to do that. It was the most bizarre thing I've ever been accused of.”

Following the explosive episode, caterer Aubrey Niccoli leaked a text conversation with Angie and told RHOSLC viewers the drama was fabricated for the episode. “We chose not to do Angie’s event ultimately as a business decision… The truth is she asked us to do it for FREE for advertising since it was going to be filmed,” wrote Niccoli, as reported by RealityBlurb. “I cannot say this enough… Lisa did NOT tell us to not do Angie’s event. Never happened and she never would do something like that. Let it be known Angie is the liar and the one sabotaging our name our business and Lisa.”

On Oct. 22, Angie took to Instagram to host a Q&A with fans, during which she said “it’s been a while” since she last spoke with Lisa and responded to accusations that she lied about the catering drama. “Different POVs don’t = a lie. I still don’t know what I ‘lied’ about. I asked questions and given the timeline of events (a lot of you didn’t see) I would [100 percent] do it again. I tried to handle it as calmly and respectfully as I could,” she wrote, per RealityBlurb. “There are text messages and phone calls, that were left out. I don’t want to make it worse for anyone which is why I haven’t said more or ‘defended myself.’ I am an honest person and if you don’t believe that, I’m ok with it.”

During the same Instagram Q&A, Angie responded to a fan’s inquiry about her interest in potentially becoming an official full-time RHOSLC cast member. “That’s always up to [Bravo] (and my sanity) I’m just extremely grateful for the opportunity we had to share a great cause on a huge platform,” she replied.

Considering we’re only halfway through the current season, fans will have to keep watching Season 2 of RHOSLC, airing Sundays on Bravo.