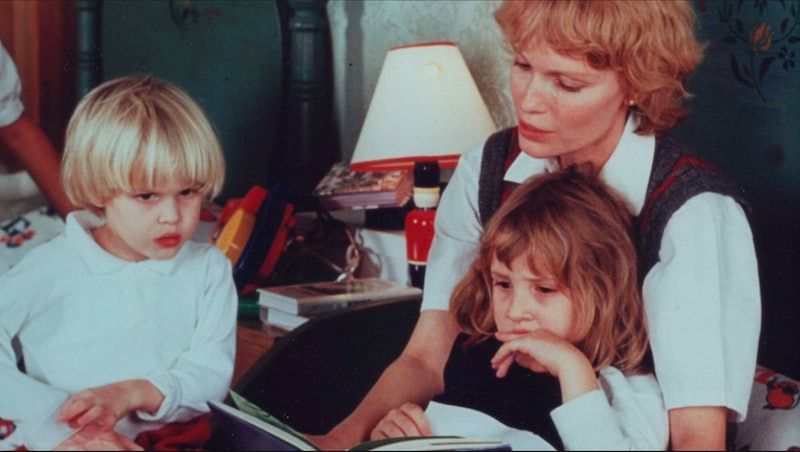 When Woody Allen's custody battle for Dylan, Ronan, and Moses Farrow began in 1992, he argued in court that Mia Farrow had become too "emotionally disturbed" to parent them. In particular, he claimed that Mia Farrow had coached their daughter Dylan Farrow to fabricate abuse allegations after discovering his relationship with Mia's other adopted daughter, Soon-Yi Previn. (Allen has long denied Dylan's claim that he sexually assaulted her when she was 7). As noted in Allen v. Farrow, this argument aligned with the ideas of psychiatrist Richard Gardner, who developed a highly controversial theory called Parental Alienation Syndrome.

Per The Los Angeles Times, Gardner was born in the Bronx and graduated from Columbia College and the Downstate Medical Center of the State University of New York; he died in 2003. Over the course of 40 years, Gardner wrote three dozen books, all self-published by his Creative Therapeutics company. At first, many of his books, like 1970's Boys and Girls Book About Divorce, focused on helping kids cope with stress after a divorce. But starting in the 1980s, he became increasingly obsessed with the "deepening national hysteria" of false sex abuse accusations, per The New York Times. In 1987, he published The Parental Alienation Syndrome and the Differentiation Between Fabricated and Genuine Child Sex Abuse, and in 1991 the book Sex-Abuse Hysteria: Salem Witch Trials Revisited.

His most widely criticized theory pushed in these books was Parental Alienation Syndrome. He claimed that during divorce custody battles, the influence of a vindictive parent — usually the mother — could turn the child against the other parent and even prompt them to make up allegations of abuse. Gardner argued this was particularly true in cases that involved sexual assault allegations. “Although the mothers in these situations may have a variety of motivations for programming their children against their fathers, the most common one relates to the old saying, ‘Hell hath no fury like a woman scorned,'" he wrote in his 1987 book.

He consistently argued this theory in court, and served as an expert witness in more than 400 cases on child custody and sexual abuse. His recommendation was often to award custody to the parent accused of the abuse, even in cases where the child didn't want to see that parent, per The New York Times. He shared similar views during Allen and Farrow's trial, telling Newsweek in 1992 that ''screaming sex abuse is a very effective way to wreak vengeance on a hated spouse.''

Gardner's theories were consistently criticized by mental health professionals and child abuse experts. Others stated that his theory was clearly misogynistic, as it was often used by lawyers seeking to undermine a mother's credibility in court. Furthermore, none of his theories went through any standard scientific methods of research. By Gardner's own admission in his books, his work was all based on personal experience. His ideas were never recognized by the American Psychiatric Association or the American Medical Association, and unlike works published by third-party scientific journals, it has never been peer-reviewed.

But the complete lack of scientific verification never seemed to phase him. In a 2002 keynote address at a conference on Parental Alienation Syndrome, Gardner claimed, "They may not wish to recognize it. They may refer to it by another name. But that does not preclude its existence. A tree exists as a tree regardless of the reactions of those looking at it."