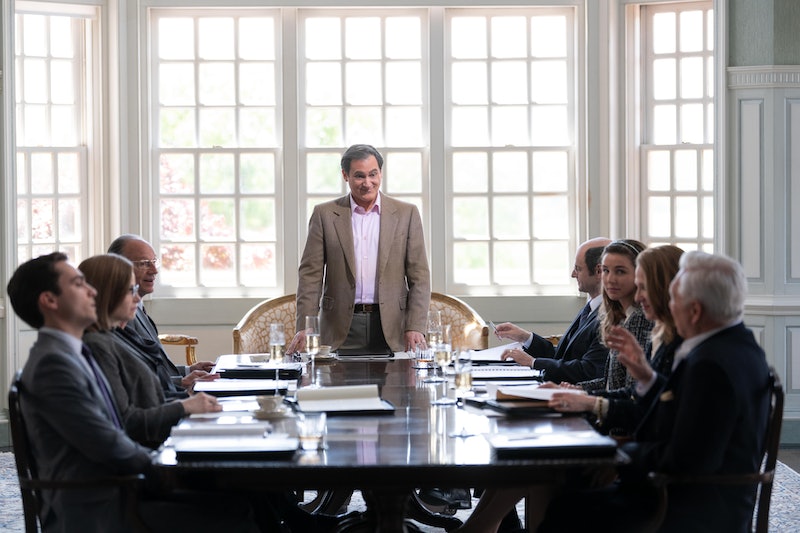 Hulu’s new limited series Dopesick dives into the epicenter of America’s opioid crisis, tracing its origins in the early ‘90s and proliferation through the next decade. At the center of it all is the family-owned company Purdue Pharma — the developer of OxyContin — and its chairman Richard Sackler, who’s played by Michael Stuhlbarg. “I think I can make this the biggest drug in the world,” he announces ominously in the trailer for the show.

Dopesick is based on Beth Macy’s 2018 investigative novel of the same name, which takes a critical look at Purdue Pharma’s role in the opioid epidemic. The company began production of OxyContin in 1995, aggressively marketing the drug and allegedly downplaying how addictive it is; in reality, OxyContin is now one of the most commonly abused prescription drugs in the country, and more than 500,000 Americans have died from overdoses of prescription and illegal opioids.

Though the members of the Sackler family involved with Purdue have denied wrongdoing and maintain they have always conducted themselves ethically and legally, over 3,000 lawsuit have been brought against the company in the ensuing decades. In September 2021, Purdue Pharma was dissolved in a bankruptcy settlement that largely absolved them from any liability in the opioid crisis. As a result, the Sacklers will remain among the richest families in the U.S., though they’ve also relinquished their equity in the company.

According to Forbes, doctors John Purdue Gray and George Frederick Bingham founded Purdue in 1892. The Sackler brothers — Raymond, Mortimer, and Arthur — bought it in 1952. They initially sold earwax remover, laxatives, and antiseptic, but moved into the growing field of pain management in the ‘90s. Richard Sackler, the son of Raymond, had joined the company in 1971 as an assistant to his father, then Purdue’s president. He later became the head of research and development and head of marketing, and was in charge of the research department that developed OxyContin.

Described by the New Yorker as “an enigmatic, slightly awkward man” who had trained as a doctor, Sackler played a central role in the marketing of OxyContin. He told colleagues that he was determined to make the drug a success and launched it with one of the biggest pharmaceutical marketing campaigns in history. According to the New Yorker, one of the biggest concerns surrounding OxyContin in focus groups conducted by Purdue was its potential to be abused. But in the years before it was approved for use by the FDA in 1995, doctors began arguing that this was a “medical myth” and that opioids could be used long-term with little side effects. One of these doctors was Russell Portenoy, a pain specialist at Memorial Sloan Kettering Cancer Center who received funding from Purdue.

Though Purdue conducted no clinical studies about how addictive OxyContin could be, the FDA approved a package insert for the drug that stated it was safer than rival painkillers due to its time-release properties. The FDA examiner who oversaw the process, Dr. Curtis Wright, left the agency shortly after the decision and later took a job at Purdue.

By 2000, OxyContin was generating a billion dollars a year. Reports that the drug was being abused emerged almost immediately after its release and continued to increase — so much so that in 2001, the Connecticut attorney general wrote directly to Sackler urging him to “completely overhaul and reform” Purdue’s marketing of OxyContin. But Purdue did not stop producing the drug or acknowledge that it was addictive. Instead, the company insisted that the problem stemmed from recreational drug users not taking OxyContin as directed and that it was a matter of individual responsibility.

Though Purdue’s executive vice president testified that their marketing of OxyContin was “conservative by any standard,” in 2003 the Drug Enforcement Administration found that Purdue’s “aggressive methods” had “very much exacerbated OxyContin’s widespread abuse” and concluded that Purdue had “deliberately minimized” the risks associated with the drug. Purdue continued to refuse any liability. When Sackler later gave a deposition for one of the many lawsuits brought against Purdue, the lead attorney on the case described him to the New Yorker as having, “A smirk and a so-what attitude — an absolute lack of remorse.”

Sackler, who became Purdue’s president in 1999, stepped down from the role in 2003 but remained a co-chairman of the company’s board. He worked for several years as an adjunct professor of genetics at New York’s Rockefeller University before moving to Austin, Texas in 2013.

Dopesick also portrays Sackler’s cousins Beth Sackler (Andrea Frankle), daughter of Arthur, and Kathe Sackler (Jamie Ray Newman), daughter of Mortimer. Kathe Sackler later proclaimed that her family had nothing to apologize for and that she felt she was deserving of credit for having come up with the idea for OxyContin.

Per Stat News, the members of the Sackler family involved with Purdue have generally avoided public discussion of OxyContin or their role in disseminating the drug. The Purdue website makes little mention of Richard Sackler, now 76, or other family members, and he rarely speaks at public events or is photographed.