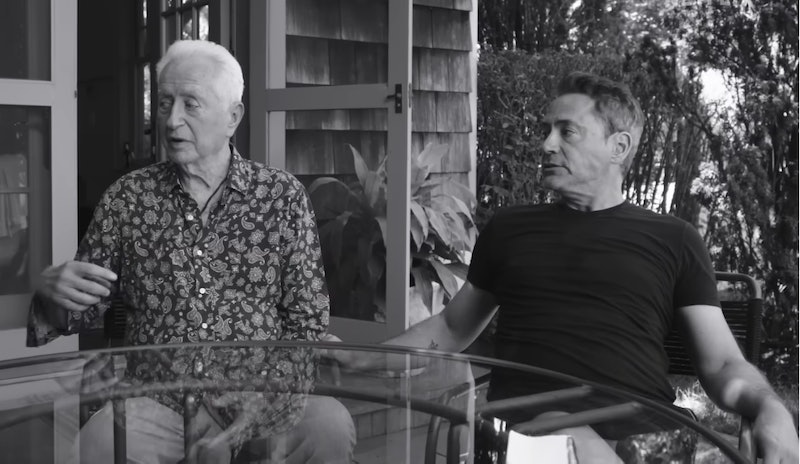 A hugely famous actor in his own right, chances are you probably know Robert Downey Jr. best as Marvel’s Iron Man, Ally McBeal’s Larry Paul, the star of Less Than Zero, or a big screen Sherlock Holmes. But did you know that the U.S. actor’s dad, Robert Downey Sr. was also a celebrated underground filmmaker and actor, well known for his embrace of absurdism across surreal short films and big-budget movies alike?

That’s exactly the story that Robert Downey Jr. is setting out to tell in his new documentary Sr., a touching film about forgiveness, creativity, and family connection filmed in the final months of his father’s life. Following the making of the documentary, which Downey Sr. helped to direct, he passed away from Parkinson’s disease aged 85, in Jul. 2021.

“Like Father. Like Son. Like No Other,” reads a Netflix synopsis. Sr. is a lovingly irreverent portrait of the life and career of maverick filmmaker Robert Downey Sr. that quickly devolves into a meditation on art, mortality, and healing generational dysfunction.”

Expanding on the film in an Instagram post, Downey Jr. added: “it’s not uncomplicated” — presumably referring to his relationship with his father growing up. Downey Jr. used drugs from a young age, and when he was jailed on a drugs charge in 1999, he told the court that he had been addicted to various drugs since he was eight. Previously, he spoke about being surrounded by substances as a child, and said that he and Downey Sr, who also struggled with addiction issues, would take drugs together. “When my dad and I would do drugs together, it was like him trying to express his love for me in the only way he knew how," Downey Jr. told People in 1988. The actor has been drug-free since 2003.

In Sr. the father and son do discuss these events in candid detail, but mostly it’s a film about forgiveness and repairing relationships, as well as how important art is to each of them. “Oddly, it’s sort of what your family does,” observes a therapist towards the end of the film. “You guys make art of your lives.”

Sr. has been showing in select cinemas, and is due to hit Netflix on Dec. 2.

“We never know how much time we have with each other,” Robert Downey Jr. says in a voiceover for the trailer, detailing his plan to introduce viewers to his father’s film-making career, and capture who he is as a person now. Watch it below.

More like this
Adam Ali Hopes 'Waterloo Road' Will “Subvert” Queer Misconceptions
By Sam Ramsden
Jemima Khan Used Her Own Life As Inspo For 'What’s Love Got To Do With It?'
By Darshita Goyal
Gerard Butler Insisted On Adding This Pivotal Scene To 'Plane'
By Catharina Cheung
You’ll Definitely Recognise Isadóra Bjarkardóttir Barney’s Mum
By Maxine Harrison
Get The Very Best Of Bustle/UK
Sign up for Bustle UK's twice-weekly newsletter, featuring the latest must-watch TV, moving personal stories, and expert advice on the hottest viral buys.