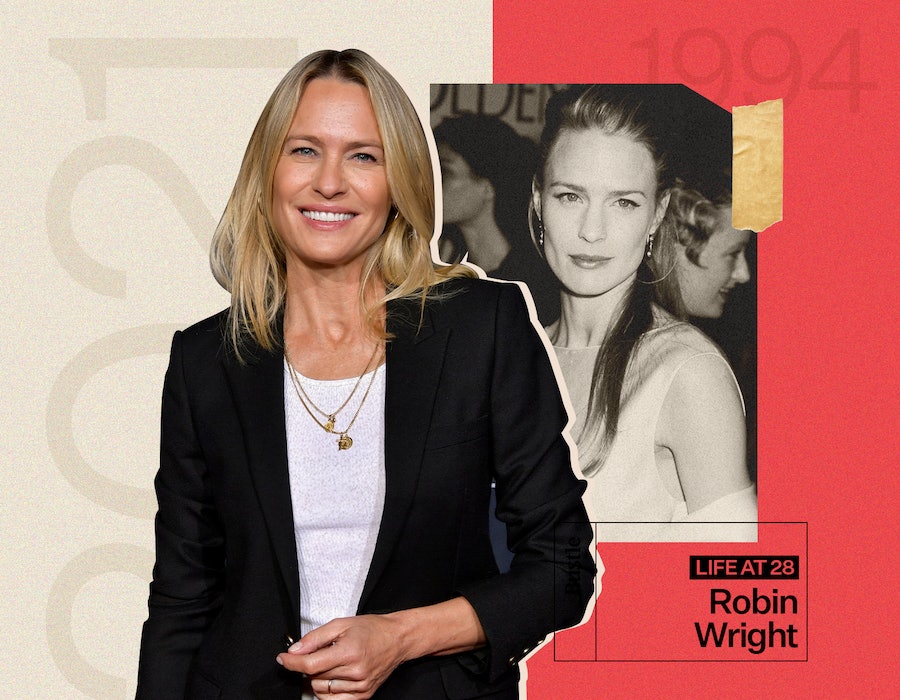 In Bustle’s Q&A series 28, successful women describe exactly what their lives looked like when they were 28 — what they wore, where they worked, what stressed them out most, and what, if anything, they would do differently. This time, Robin Wright discusses Land and filming Forrest Gump alongside Tom Hanks.

On screen, Robin Wright is an escape artist who can disappear into the roles of a princess, president, or queen of the Amazons with ease. Now, a year after the pandemic left the world homebound and restless, Wright is trying to break out of the house. “I miss traveling,” Wright tells Bustle with a wistful laugh. “I’m jonesing to get out of my office.”

The confines of Wright’s workspace are a far cry from the Wyoming Rockies that fill the frame of her film directorial debut, Land (out on VOD and in select theaters now). In addition to helming the project, the 54-year-old plays Edee Mathis, a grieving woman who flees to a remote cabin after experiencing unimaginable loss. Wright shot the film on a mountain in Alberta, Canada, transporting viewers to the character’s solitary world. “This woman goes and lives off the grid in the wilderness, and she’s not even seeing it,” Wright explains. “Then by the time she starts to go through a rebirth, she communes with nature, and it sounds different, it looks different. You feel that she’s with it as opposed to standing outside of it.”

The resilience Edee comes to find through nature and an unexpected connection with a hunter named Miguel (Demián Bichir) is something Wright has been chasing since her 20s — a period that she remembers as “a juggling act” between parenting and filming. “You have to have help, and you don’t get a lot of sleep, and that is what it is.”

Now that she’s in her 50s and free from the round-the-clock responsibilities of motherhood, Wright can take on various roles. “When the kids grow up, you suddenly have more freedom to pick and choose the times that you work or how long you are on a movie,” she says.

Wright jokes that she can barely remember what she was doing last week, but as the actor and director moves on to the next chapter in her career, she spoke with Bustle to reflect on Forrest Gump, becoming a mother, and how the House of Cards set doubled as film school.

That was a long time ago. [Laughs] I had two small children [Dylan Frances Penn, now 29, and Hopper Jack Penn, now 27]. I remember like, “OK. I want to stay in the business. But I want to be a mom, and I want to be here for my children. At that time, it was more about hoping to get films — whether it’s a cameo in a movie or a lead or films that you connected with — where I could just shoot during the summer break so that I could be there during the school year.

Forrest Gump premiered that year, too; it was a huge movie for you that resulted in Golden Globe and SAG nominations. How do you reflect on that film and that time in your life?

That was one of the most incredible experiences of my career for sure. It’s such a beautiful movie without being overly sentimental. We had no idea that it would be the success that it became while we were shooting it. Just to be able to get to play a character over the course of almost 20 years — everything that Jenny went through with Forrest. Tom [Hanks] and I had such a great time laughing every day. And you walk away from that, years past now, and you’re like, “I feel so blessed and honored to have been in such an iconic film.”

What did a typical weekend look like for you at 28?

As a mother, you’re just waking up every day going, “I kept my kid alive again. One more day.”

Did you have aspirations to direct when you were 28?

They started to creep in. But I knew I wasn’t ready. Around the beginning of House of Cards and then after Season 2 of House of Cards, I said, “I’m ready.” I think it was also [because] you have a family [of cast and crew] when you shoot a series for that many years. We were six years together. I just felt so safe and supported and encouraged to do it. They’re like, “We’ll help you. Anything you don’t know, we’re going to teach you as you do it.” I basically got mini cinema school while I was on that show.

Were there directors that you looked to for inspiration or advice?

I had always kept notes of the little tidbits, those little nuggets from all different directors that you’d worked with in the past. You take that technique or that portion of the style that they shot. I would write it down. “This scene in this movie. I really loved the look of that. This is what it conveys.” So I would compile all those notes and then share all of that in multiple discussions in prep with my DP [Director of Photography Bobby Bukowski].

With Forrest Gump and The Princess Bride under your belt by 28, did you feel like you’d made it?

I don’t think I’ve ever felt that thing of, “Oh, you’ve made it. We’re here. Good. We can wash our hands and sit back.” This industry is very unpredictable. There’s no security. You never know if or when you’re going to get your next job. You just pray that you do. You pray that you get to have multiple years of doing the thing that you love and not just being a flash in the pan.

What advice would you give yourself at that age?

I know it’s not possible to expect for somebody of that age, but looking back now [at] 28, I would say, “Relinquish your fear. You can fail — you’ve got to fail sometimes to come through with success.”

More like this
Margot Robbie Breaks Her Silence On *That* Viral 'Barbie' Moment
By Maxine Harrison
The Trailer For The Whitney Houston Biopic Has Twitter Feeling Heated
By Radhika Menon
At 28, Sharon Horgan Was Hoping To See Damon Albarn At The Pub
By Samantha Rollins
12 ’90s Movie References You Missed In 'Do Revenge'
By Radhika Menon
Get Even More From Bustle — Sign Up For The Newsletter