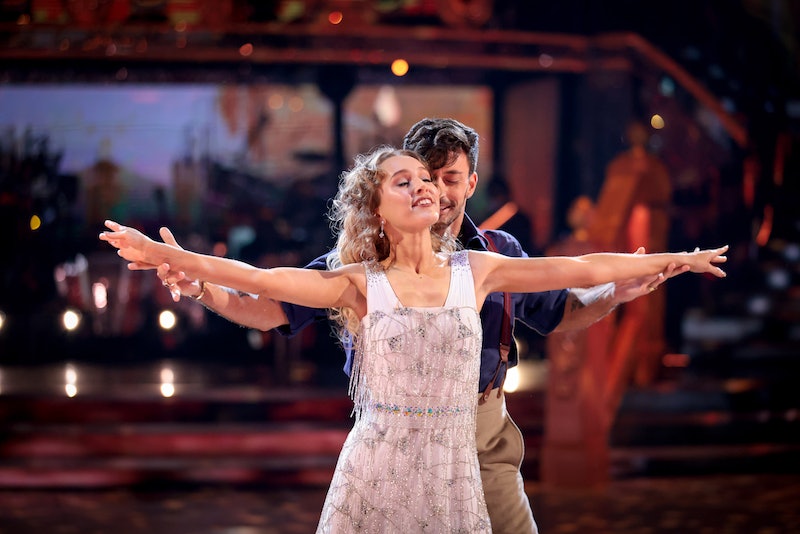 BBC’s Strictly 2021 is well underway with this year’s celebrities putting on dazzling performances for the judges alongside their talented professional partners — including Eastenders actor, Rose Ayling-Ellis, who has made history as the first-ever deaf person to participate in the dancing competition.

Following her impressive Titanic-inspired foxtrot for movie week, Ayling-Ellis, 26, and Italian dance partner Giovanni Pernice (who she describes on Instagram as “the best teacher ever!”) have been tipped as a favourite to win the coveted glitterball.

“Every week I am discovering more and gaining confidence through @pernicegiovann1 guidance,” the actor shared on Instagram this week. The dreamy dancing duo will dance it out with another complicated routine at the live shows this weekend, proving as Rose explains via Insta, that “dance is about expression and listening, not what you can hear.”

If you want to learn about Rose Ayling-Ellis, keep reading to find out about her social media, her day-to-day life, and more.

Rose Ayling-Ellis has a growing Instagram following with more than 89,000 followers on her page. On Instagram stories, you can also find much of the actor’s Strictly behind-the-scenes action, including her grueling dance rehearsals with Giovanni.

During this week’s practice, the actor, who uses British Sign Language, revealed via Giovanni’s Instagram stories that she had broken her hearing aid. “I think it's because I sweat so much it broke it... so I can't hear anything at all” she signed. Still, the actor reassured that “nobody need to panic” as “it is a very normal life for deaf people” and also joked about Giovanni that “it's quite nice I don't have to hear his voice!”

Rose Ayling-Ellis is best known for playing Frankie Lewis in Eastenders, daughter of Danny Dyer’s character Mick Carter. However, the actor from Kent has also appeared in Casualty and BBC Two’s Summer Of Rockets, and she has taken part in many theatre productions.

Does Rose Ayling-Ellis Have A Boyfriend?

Cheering Rose on from the Strictly audience is her boyfriend of seven years Sam, who described her as a “badass” after her second performance on Strictly.

“I still find you the most funniest, beautiful and super cool girlfriend I ever asked for,” he wrote on social media, per OK Magazine. “You are a true badass girlfriend.”

From the looks of their Instagram snaps, the couple have shared various adventures together throughout their relationship, from the desert of Huacachina in Peru to a jungle in the Amazon.