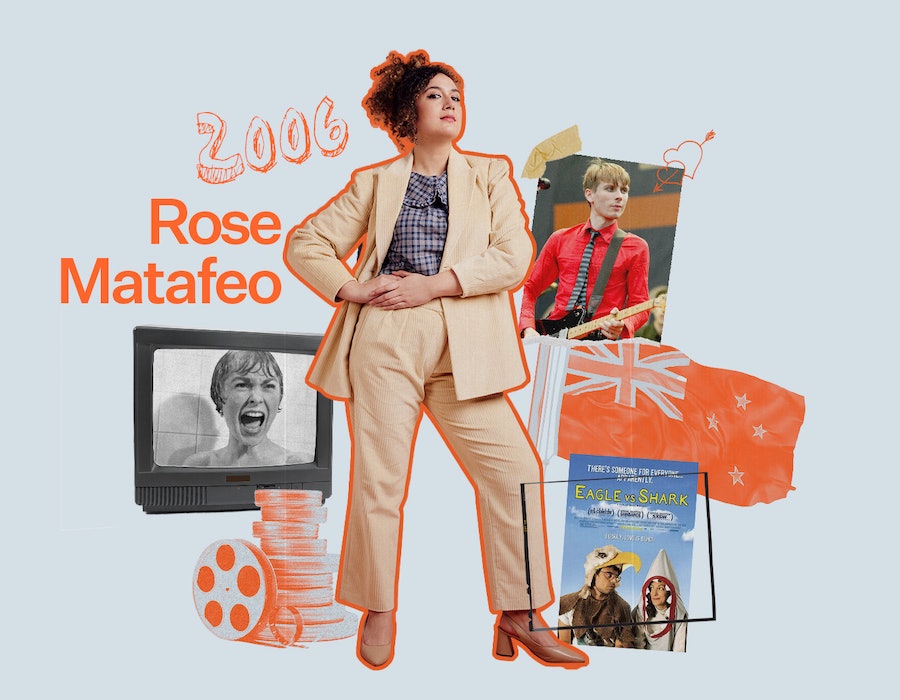 In this spinoff of Bustle’s 28 series, successful women describe exactly what their lives looked like at 14, and what their goals were for the future. Here, Starstruck creator, writer, and star Rose Matafeo looks back at growing up in New Zealand and her obsession with movies.

The year is 2006 in Auckland, New Zealand. Then-14-year-old Rose Matafeo has braces, dial-up internet, and a massive crush on the lead singer of Franz Ferdinand. More than a decade later, she’ll meet him in person and develop a friendship after joking about her teenage obsession with him in her standup show, Horndog. He’ll even attend her 30th birthday party, which happened days before we speak. “If I could talk to my 14-year-old self and say that would happen one day, [she] would just go, ‘You are an absolute nutcase,’” Matafeo tells Bustle from London.

It’s the kind of coincidental brush with fame that would be right at home in an episode of Matafeo’s screwball comedy Starstruck, a “reverse Notting Hill” in which aimless twenty-something Jessie (Matafeo) has a one-night stand with Tom (Nikesh Patel) only to realize the morning after that he’s actually a semi-famous actor. Season 2 of the series, streaming now on HBO Max, delivers more quirky rom-com charm, with Jessie and Tom navigating the less glamorous reality of an actual relationship in the aftermath of Jessie’s grand romantic gesture at the end of Season 1. It’s a show that’s steeped in rom-com homages (upon receiving a Joni Mitchell CD from Tom as a Christmas gift, as happens in Love Actually, Jessie exclaims, “he f*cking Alan Rickman-ed me!”) even as it quietly subverts them by exploring what happens after the happily ever after.

But for all the encyclopedic rom-com knowledge of its creator, 14-year-old Matafeo was more obsessed with studying up on the French New Wave and independent directors like Michel Gondry than she was with learning about what happened when Harry met Sally. The standup comedy career that helped her rise to prominence in New Zealand also had not yet started in earnest: Though she’d auditioned for a comedy course at school a year prior — she was turned away for being too young at 13 — she’d return to the program at 15 with her very first joke. “It was not bad for a 15-year-old,” Matafeo laughs. More than a decade later, she’s stuffed her TV show with plenty of great ones.

Below Matafeo reminisces about idolizing Taika Waititi, her “eclectic” taste in celebrity crushes, and finding comfort in the fantasy of happily ever after.

Take me back to 2006, when you were 14. Where were you living, and how were you feeling about your life?

I was in Auckland, New Zealand, which is where I was born and raised. I think I got braces that year; I got them off when I was 17. I was attending Auckland Girls Grammar School. I was living with my family, with my parents and my two older brothers in Auckland in our little tiny house in Auckland Central.

Fourteen was the year that I was massively into Franz Ferdinand. I think I was 11 when their first album came out and I was a massive fan. It was the first band I felt like I had discovered in real time. I was always into such old music as a kid — I was obsessed with Burt Bacharach and the Bee Gees and those were my favorite bands.

“Take Me Out” was a huge hit in New Zealand, and it was also still an era of music video culture and music TV where you'd text in to request they play a music video you wanted to watch, because it was just a bit before YouTube was a huge thing. And I had dial-up probably at that point, so it would take an hour to load a music video on YouTube anyway. I remember texting in to request “Dark of the Matinee” by Franz Ferdinand, spending 20 cents a text, which was quite expensive. I was rinsing myself.

I bought all the merch I could find of them, went on the forums. I had a massive crush, at the time, on Alex Kapranos, who is the lead singer. And I [wrote on the forum], like, “I'm going to marry Alex Kapranos,” and then I got kicked off.

I was going to say, I wanted to check if the bit from Horndog was real! It sounds like it was.

That bit is completely real. It was so shameful at the time. And I lived with that shame so long.

Did you tell anyone at the time that you got kicked off?

No, I didn't. It was just a horrible thing. I was like, "Oh my God, I'm a terrible person." And the way [it’s come] full circle is that I know Alex [Kapranos] now, because of the show and writing that joke. He was at my 30th [birthday party] the other day, which is so lovely.

Starstruck pays homage to classic rom-coms. Were you watching rom-coms at 14?

I was watching way more pretentious stuff. At 14, I really wanted to be a director. I'd go to the director's section of the Video Ezy, which was the video rental shop. I was watching Godard, and Truffaut, and I tried to make my way through all of Alfred Hitchcock’s films. I honestly saw more independent film as a teenager than I do as an adult.

I was very uncool and I was not a partier. I had nerds as friends — they were total film nerds, total book nerds. And that helped facilitate an obsession and interest in all of those things as an adult. So I was obsessed with Michel Gondry and Spike Jonze and all of those [directors]. Also, it was an exciting time for New Zealand film. Taika [Waititi] had just made Eagle vs Shark around that time — I was obsessed with him as well.

Your character Jessie in Starstruck ends up dating a famous actor. At 14, did you have any celebrity crushes, aside from Alex Kapranos?

Oh my God, there must have been a few. I had a celebrity height chart in my diary, which I wrote all of the celebrities I liked and then the difference in height between me and them, so I would know exactly how much taller or shorter they would be. Which was psychopathic behavior, looking back on it.

I mean, Colin Firth, probably — that vibe of British dudes. Everyone goes through a phase of that! Michel Gondry was honestly one of my biggest crushes when I was 14. I had a crush on the lead singer of A-ha, Morten Harket, I thought he was just absolutely stunning. Brandon Lee, who was dead by then. I had a very eclectic taste in crushes — Dick Van Dyke. I didn't have many crushes on contemporary people. [They were] often dead or way too old for me. It’s continued now; most of my crushes are dead now. I've got a picture of Paul Newman up on my bedroom [wall], actually.

Fourteen-year-old Rose had braces, had the same hair as I have here now. I didn't have any experiences really with boys as a teenager, yet I wanted them. In retrospect, I feel like I really pined for it. I think I had a similarly romantic view of love and crushes, where there was a safety in it being kept in a fantasy realm as opposed to reality, because reality is so often disappointing.

I never dated anyone when I was a teenager — I did not have any sexual experience whatsoever. I think my concept of romantic relationships was possibly very much influenced by things I've watched. But I think that they so often are when you're 14, because where else are you going to learn it?

They still are for so many people, myself included. Has your concept of what constitutes happily ever after changed since then?

I think no. I honestly think I feel similar. I feel like I'm still a space cadet when it comes to love and romance. I think the fantasy of what it is in my mind is always usually better than reality. And it's nice to dabble in reality sometimes, but it's actually easier to just make up your own concept of it.

[But] I think my concept of romance and love in general has broadened as an adult. When you watch rom-coms [as a teenager], you're obsessed with the romantic relationship at the heart of it. And then when you're an adult, you go, "Oh my God, the love is going on with this main character's friendships, with the people around her." You learn that the platonic relationships in your life are equally as, if not more important, in my opinion, than romantic ones. I think it's sometimes foolish to look for all of the fulfillment of your life in one relationship. It's actually good to hedge your bets! Don't put all your eggs in one basket — spread those eggs out!

What do you think your 14-year-old self would think of you now?

I think she'd be bloody impressed, to be honest. I think she'd be so happy. I think I've done 14-year-old Rose very proud. I very rarely like to — publicly, at least — give myself any credit for anything, but I honestly think she'd be stoked. Relieved, because she knows that she has no other transferable skills, and she has to do comedy.

More like this
Everything To Know About 'And Just Like That...' Season 2
By Jack Irvin and Grace Wehniainen
Here’s What Happens To Bill & Frank In 'The Last Of Us' Video Game
By Brad Witter
Who Is "Daddy" Pedro Pascal Dating? People Are Thirsting Over The 'Last Of Us' Star
By Alyssa Lapid
Ashton Kutcher Wants Danny Masterson “To Be Found Innocent” In Rape Retrial
By Jake Viswanath
Get Even More From Bustle — Sign Up For The Newsletter
From hair trends to relationship advice, our daily newsletter has everything you need to sound like a person who’s on TikTok, even if you aren’t.