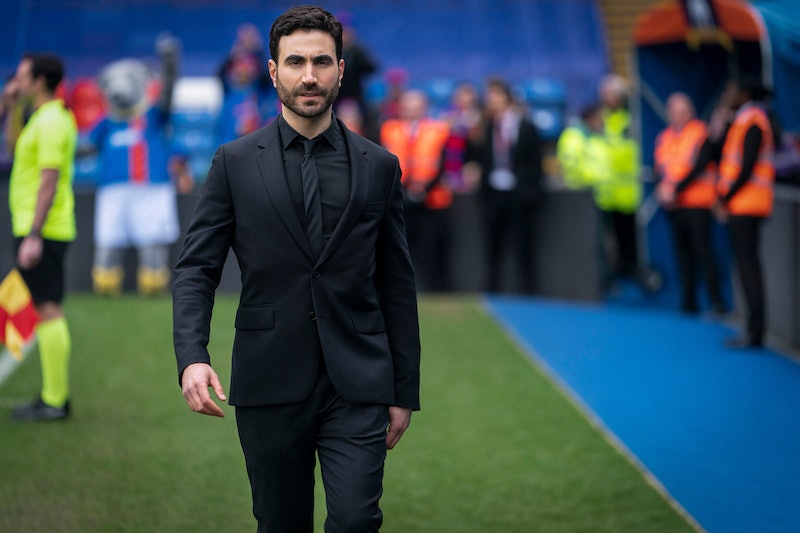 via the Apple TV+ press site

Ted Lasso is a show known for its light, optimistic, and generally cheery humor. So of course it needs a foil like Roy Kent, who is gruff and obstinate on his good days and downright irate on his bad ones.

And yet, Roy is one of the most consistently funny parts of the show. It helps that star Brett Goldstein has impeccable comedic timing, landing everything from a one-liner to a low growl. When he’s not busy slowly softening from an angry, jaded soccer player to a more compassionate-but-still-angry soccer player, he’s busy killing his Ted Lasso impression (or, more accurately, hilariously not nailing it at all). It is precisely this deft skill that earned Goldstein an Emmy nomination for Outstanding Supporting Actor in a Comedy Series.

Watching his performance as part of a whole, as it grows and evolves along with the character, is side-splittingly funny. But it’s worth revisiting some of his standout moments along the way. Read on for the best 10.

When Ted got him to read A Wrinkle In Time

We get an early glimpse at Ted and Roy’s developing dynamic when Ted gives all his players books to inspire them. As Ted puts it, the first domino that has to fall is in Roy’s heart, and A Wrinkle in Time is just the way to crack through that hard exterior and have him embrace his role as team captain. At first, Roy is incredulous, then angry that he’s supposed to be the little girl in the story, and finally profane when he reads the book aloud to his niece.

Refusing to acknowledge the paparazzi at the gala

The man knows how to work a red carpet (flipping them off and saying “No! No! F*ck off! F*ck you!”).

Trying to be cool in front of Keeley

When Keeley reminds Roy that his last girlfriend stole his Rolex, he responds with a philosophy we can all live by: “So? I don’t need a phone and a watch!”

Pretty much any time he banters with Keeley

Watching their flirtation turn into love is one of the highlights of Season 1. You can really take your pick from any time they interact — their first date where Roy confesses he’s in a secret yoga group; him drawing her a bath for some alone time; his press conference just for her (“see you on the pitch”) — but his shy defensiveness over his youth charity video for world hunger is a small sweet spot.

His way with kids

Though Uncle Roy is not that much different than the Roy Kent the rest of the world sees, his niece Phoebe brings out a sweetness to him that’s not always apparent. He genuinely cares about her — like asking “What do you have to be sad about? Did one of the Paw Patrol dogs die?” — and he’s eager to make sure she gets a fair shake, like when he clarifies with her teacher whether Phoebe was justified in calling a kid in her class “a pathetic sh*t f*cker.” Plus, he’s a great kids soccer coach, so long as you don’t mind a lot of swearing.

His response to the Diamond Dogs

When Roy comes to Ted for advice about Keeley, he calls in the “Diamond Dogs” — aka a “group of people who care” — much to Roy’s chagrin. His reaction is peak Roy Kent, all the way from his, “He’s in his 60s and he’s from South London, of course my dad’s a little racist!” quip to calling Keeley’s ex the “prince prick of all pricks.”

When he was a star on Sky Sports News

After struggling a bit to figure out what his post-playing career should look like, Keeley lands Roy a job breaking down the week’s matches. Roy being Roy, he doesn’t hold back, and listen: If all sports pundits approached their commentary with the same bluntness as Roy, sports TV would be better for it.

The small sight gag of his restaurant endorsement

In Episode 5, Roy Kent endorses a restaurant with an unbothered succinctness that only he could stick: “Yum — Roy Kent.”

When he makes fun of Ted’s Americanness

Though they’ve come a long way since Roy called Ted “Ronald f*cking McDonald” and said he counted down the days until Ted left town, he still ribs him whenever the chance arises. In Season 2, Episode 2, he catches a glimpse of Ted riding a lawn mower and remarks to Keeley that Ted is, “Probably homesick. Closest thing he can find to a Dodge Ram.”

When he tries to resist any kindness

As he worries when he retires: “Jamie Carragher sent me flowers. We f*cking despised each other when we played, now he’s sending me flowers. How the f*ck does he know I love white orchids?”

More like this
The 8 Best Aidan Shaw Moments On 'Sex And The City'
By Grace Wehniainen
You Might Want To Rewatch This Key 'On My Block' Scene To Understand 'Freeridge'
By Grace Wehniainen
The 'Freeridge' Cast Shared Their Hopes For A Potential Season 2
By Grace Wehniainen
A 'Terminal List' Sequel & Spinoff Are Reportedly In The Works
By Kadin Burnett and Grace Wehniainen
Get Even More From Bustle — Sign Up For The Newsletter
From hair trends to relationship advice, our daily newsletter has everything you need to sound like a person who’s on TikTok, even if you aren’t.