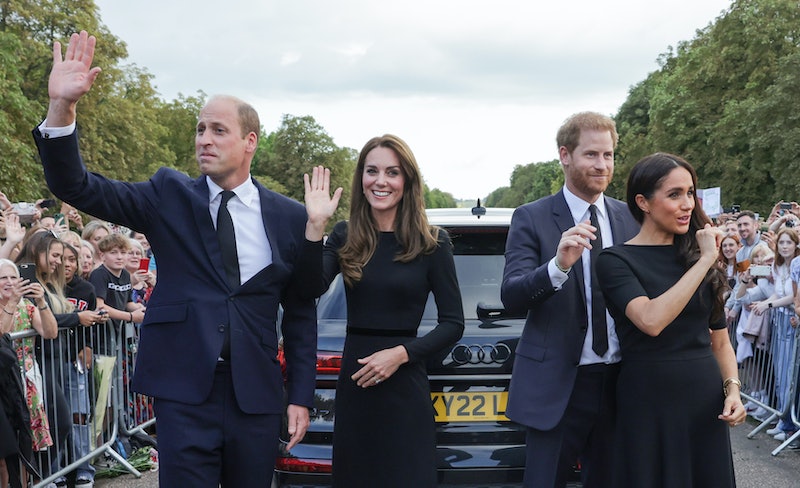 Meghan Markle and Prince Harry are ruffling some more feathers in the royal family. In their new Netflix docuseries Harry & Meghan, which premiered Dec. 8 and wrapped up Dec. 15 , the couple tracks their love story and reveals why they left the royal family in more detail than ever before. Viewers are wondering how their family feels about the Duke and Duchess of Sussex’s new venture, but it looks like they won’t be quick to respond. On Dec. 15, PA Media reported that Buckingham Palace and Kensington Palace have officially “declined to comment on the Sussexes’ Netflix documentary, Harry & Meghan.”

As viewers found out in the Netflix doc’s first episode, the royal family did not participate in Harry & Meghan in any way based on the disclaimer that reads, “Members of the royal family declined to comment on the content within this series.” However, a source has disputed Netflix’s disclaimer to PEOPLE, claiming that no family members have been contacted about the show’s content. A royal source added that Buckingham Palace and Kensington Palace officials did receive an email about the series claiming to be from a third-party production company, but could not verify the email address’ source or identity with Netflix or Harry and Meghan’s Archewell organization.

READ NEXT: 21 Photos Of Harry & Meghan With Dogs

Netflix responded by telling PEOPLE that representatives for Harry’s father King Charles III and brother Prince William were contacted in advance of the series premiere and given the chance to respond to claims. While the royal family may be declining to comment on the Netflix docuseries as of yet, they may speak out in the future about the couple’s stories of leaving the royal family that involve the institution, including how the Palace reportedly “lied” to protect William.

Prior to the series’ premiere, the Palace reportedly prepared for any potentially damaging claims or impact from the series. Despite reports that aides held crisis meetings, the plan was reportedly for the royal family to simply let the show pass by quietly, keep going with their obligations, and not comment on the show much. “It’s likely going to be tricky but the intention is to keep heads down and keep going,” a royal source told Vanity Fair. “It’s a tried and tested strategy and has served them well in the past. William is letting his work speak for itself as we saw in Boston and the King has a busy program of events. The message from the palace will be duty.”

The outlet even reports that royal family members, including Harry’s father King Charles III and brother Prince William, had different ideas for how to approach the series, especially if there’s more allegations of institutionalized racism. “While Charles believes in the age-old mantra ‘never complain never explain’, William could be more inclined to speak out particularly if he feels he has to defend himself or the family over something serious like racism,” the source said.

Previously, Buckingham Palace released a statement ahead of the couple’s interview with Oprah Winfrey in March 2021, explaining that they had no interest in commenting on the matter. But after the interview, the royal family responded to the couple’s story, specifically claims that an unnamed family member raised concerns about their son Archie’s skin color. “The whole family is saddened to learn the full extent of how challenging the last few years have been for Harry and Meghan,” they wrote. “The issues raised, particularly that of race, are concerning. While some recollections may vary, they are taken very seriously and will be addressed by the family privately. Harry, Meghan and Archie will always be much loved family members.”

More like this
Prince Harry Incorrectly Recites Christina Aguilera’s “Genie In A Bottle” Lyrics
By Jake Viswanath
Everything To Know About 'The Real Housewives Ultimate Girls Trip' Season 4
By Jake Viswanath
Andy Cohen Apologized To Larsa Pippen After A 'RHOM' Season 5 Reunion Dust-Up
By Brad Witter
'The Crown' Season 6 Has Suspended Filming "Out Of Respect" For The Queen's Death
By Bustle Staff
Get Even More From Bustle — Sign Up For The Newsletter
From hair trends to relationship advice, our daily newsletter has everything you need to sound like a person who’s on TikTok, even if you aren’t.

This article was originally published on Dec. 8, 2022