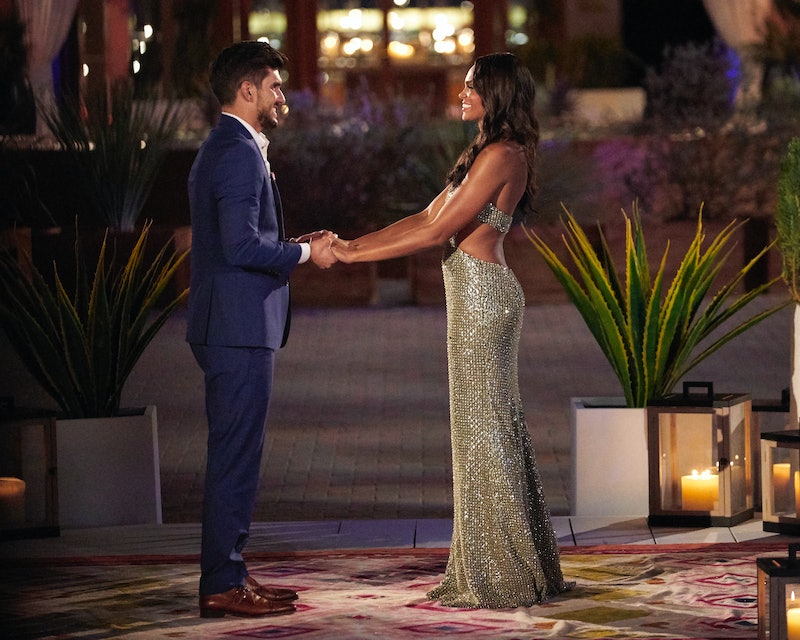 It only took a few minutes for a controversy to emerge on Michelle Young’s season of The Bachelorette. Before the men even met Michelle, hosts Tayshia Adams and Kaitlyn Bristowe visited some of the contestants and snooped around their hotel rooms. What they found in contestant Ryan Fox’s room was a folder filled with research about how to win the show. Insert red flag emojis.

During his limo entrance, Ryan arrived on an ice cream truck because — checks notes — Michelle likes ice cream, a unique interest that no one else could possibly share. Afterwards, Tayshia and Kaitlyn pulled Michelle aside to inform her about their discovery. “We found a document that one of the guys had and it had a lot of things on how to act around you,” Tayshia said. Kaitlyn added, “Verbatim what he’d written down was, ‘Make it seem like you’re interested in [teacher] stuff.’” When Michelle asked if it’s someone she’d already spoken to, Kaitlyn didn’t hesitate. “It’s Ryan,” she said.

Michelle immediately pulled Ryan aside to confront him. Ryan, who was visibly stressed out, tried to explain that he was “very new to the Bachelor” and just wanted to come prepared. “But the notes weren’t about me, they’re about how to act,” Michelle pointed out. He said part of the notes were written by his “friend’s wife” and that he hadn’t seen “more than two hours” of the show. Michelle then asked to see the notes in the hotel room and read them page by page.

After reviewing, Michelle finally told him, “I am not okay OK starting a relationship on red flags. Unfortunately I will be walking you out.” Ryan tried to ask for another chance, but Michelle skillfully shut it down. “Again, my decision is made,” she said firmly.

Twitter obviously had some thoughts about what unfolded. Initially, users were making fun of the folder’s label, which included a rudimentary drawing of a rose and misspelled “Bachlorette.”

Two former Bachelorette contestants flagged in his playbook as people to “emulate” also commented on social media. “Who to emulate? ‘Not your typical bachelor?’ ‘Wasn’t a standout’...Ryan should I be offended or flattered?” Jason Tartick, who happens to be Kaitlyn’s fiancé, wrote.

Mike Johnson weighed in with, “get Ryan outta here…i mean he did take notes from @Jason_Tartick which is smart but this man has a whole ass syllabus!”

Twitter users also pointed out that having notes on how not to be a villain inherently makes Ryan the villain.

After he was sent home, Bachelorette fans joked that Ryan should add, “How not to get kicked out night one” to his comprehensive playbook. “Ryan did his homework, admitted to submitting someone else’s work and failed the assignment,” one user tweeted.

Others felt like Tayshia, Kaitlyn, and the producers were enjoying Ryan’s exit.

And many pointed out that Ryan’s excuses felt deceitful and commended Michelle for listening to her gut.