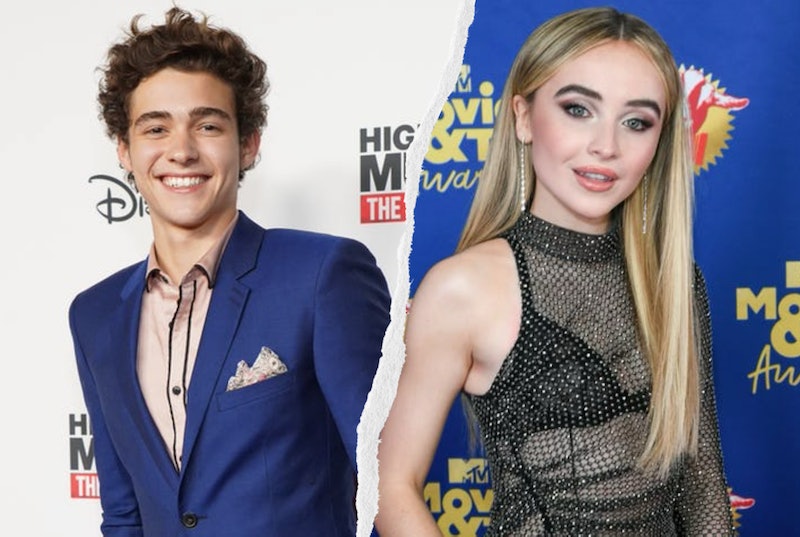 As Olivia Rodrigo's "Drivers License" continues to soar atop of the Billboard Hot 100, the alleged Disney star love triangle behind it is still all we can think about. In case you haven't heard, fans believe Rodrigo's debut single is about her High School Musical: The Musical: The Series costar Joshua Bassett, whom she was supposedly seeing until he left her for fellow Disney star Sabrina Carpenter. Since "Drivers License" dropped on Jan. 8, both Bassett and Carpenter have released songs — "Lie Lie Lie" and "Skin," respectively — that fans believe are direct responses to Rodrigo's hit. The supposed pair even announced an upcoming collaborative single titled "We Both Know," though, in a Feb. 25 interview with Billboard, Bassett announced that he and Carpenter have since chosen to scrap the duet.

In the interview, Bassett opened up about his forthcoming debut self-titled EP, set for release on March 12 through Warner Records. “It’s the most proud I’ve ever been of a body of work,” the 20-year-old musician told writer Josh Glicksman. “I showed myself that I can really do more than what I thought. It’s got me all over it — people will be able to feel that when they listen to it.”

Detailing the EP's tracks, from the downtempo "Do It All Again" to the guitar-led jam "Telling Myself," he noted that the latter track appears on the tracklisting in lieu of the previously-announced Carpenter duet. Explaining that the two artists are "super excited about" the song, Bassett said removing it is the result of “a mutual conversation about what is best right now for everybody and this whole situation."

“I didn’t want my EP to be overshadowed by some other narrative that people were trying to make,” he told Billboard. “I really want the focus to be on the art instead of some of the talk and the chatter. You shouldn’t live to please everybody, but at the same time, there are ways to be sensitive to situations where maybe [‘We Both Know’] has a better chance at a different time.”

After contemplating the collaboration's release for over a month, he added that he doesn't "have any guarantee" that fans will ever officially hear it. “In a perfect world, the art would live on its own, and people would interpret it for their own story,” the musician said. “That’s the beauty to me when I listen to other artists — there’s kind of a universal experience that we all have in a lot of ways. What’s most important is that you’re honest and [creating] what’s true to you. And then, if people want to talk, they can talk.”

More like this
Who Is Nick Cannon Dating & How Many Kids Does He Have?
By Jordyn Tilchen and Radhika Menon
Is Dua Lipa Dating Trevor Noah? New Photos Show Them Kissing & Hugging
By Brian Anthony Hernandez and Martha Sorren
Everything To Know About Taylor Swift’s 10th Studio Album, 'Midnights'
By Grace Wehniainen and Jake Viswanath
How Ghosts Inspired Kesha’s New Music
By Jake Viswanath
Get Even More From Bustle — Sign Up For The Newsletter