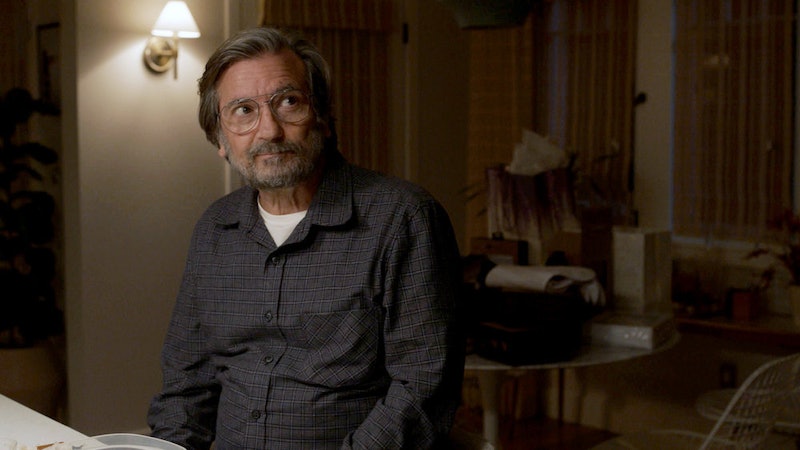 Spoilers for This Is Us Season 5, Episode 11. We finally learned more about Nicky’s backstory during This Is Us’ March 23 episode. After he arrived at Kevin’s house for the twins’ baptism (he didn’t realize it was a virtual event), Nicky downplayed how difficult it had been for him to travel from Pennsylvania to California. Not only was it his first time on a plane since serving in the Vietnam War — meaning he didn’t really understand all the new security rules — it was also a journey decades in the making. Nicky’s girlfriend Sally asked him to go to California with her over 50 years ago, in 1969, and it wasn’t until now that he finally made the trip.

Sally (played by Good Girls Revolt’s Genevieve Angelson) worked at the veterinarian’s office with Nicky before he was drafted into the Vietnam War. The two quickly bonded over a shared love of animals and nature, and they spent many nights staring up at the stars from the back of Sally’s van. When she scored tickets to Woodstock, Sally asked Nicky to come with her to the performance — and then stay with her in California. “My cousin has this farm there outside of San Fransisco,” she said, adding that they could help out on the farm and then travel the country in her van in their spare time. Nicky initially agreed, but he later got cold feet.

Nicky told Jack he was concerned that he would stand out too much in California, because he wasn’t a hippie and he didn’t surf. He was afraid Sally would lose interest and dump him. He also seemed reticent to leave his parents’ house, where things weren’t great there but were at least familiar. Nicky has never been the biggest risk-taker; Jack had to help him get a date with Sally in the first place. So the idea of leaving behind his whole life to take a chance in a new state was never really in the cards for him.

Nonetheless, Nicky and Sally continued talking after he bailed on their plans. In Season 4, Nicky revealed that the two wrote letters to each other during the war and again made plans to travel across the country together when he returned. But as his time in Vietnam dragged on, Nicky stopped writing. He wasn’t in a very good place when he returned home, but he mustered the energy for one last attempt at fixing things with Sally. He bought a trailer and drove to Sally’s house to show her he was finally ready to travel with her. But when she wasn’t home, he gave up.

However, now that Nicky has finally made it to California, there’s a chance he could find Sally again. Perhaps she ended up with her cousin at the farm near San Fransisco. It’s This Is Us, after all. This show loves reconnecting people after years apart. It may have taken him five decades to make it across the country, but perhaps it’s not too late for Nicky and his long-lost love.

More like this
Paul Mescal, Man Of Mystery
By Samantha Leach and Heather Hazzan
'Reservation Dogs' Season 3 May Finally Mend Bear & Willie Jack’s Relationship
By Gretchen Smail
Glenda Cleveland Died 2 Decades After Trying To Turn In Neighbor Jeffery Dahmer
By Brad Witter
'Grey's Anatomy's New Intern Got Advice From Dr. Bailey Herself
By Grace Wehniainen
Get Even More From Bustle — Sign Up For The Newsletter